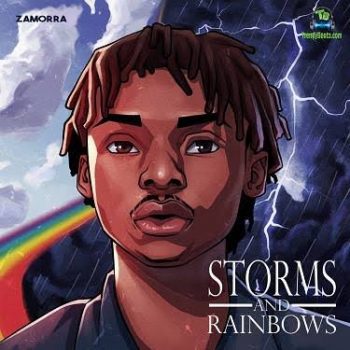 Over the years, the generic Afrobeats genre has evolved. We have experienced new artistes define over and over their genre of music, melding Afrobeats with their own style of art. There’s even an inside joke that we might not be able to keep up with all the new genres in the coming years. In her new interview with Teen Vogue, Tems describes her genre of music as “Spirit music,” which when you look at it makes sense, because she often has to look inwards to make music that resonates with her audience. Rema, in his first few months, started with trap, but as time went on, his sound evolved into what Nigerians jokingly called “Indian music.” He has taken it upon himself to duly correct the misunderstanding and he tags his genre, “Afro-rave.” His soon-to-be released debut album is reportedly called “Rave & Roses.” In the past couple of weeks, we’ve experienced former music producer and now music artiste, CKay, rise through the ranks with his 2018 single “Love Nwantiti (ah ah ah)”. He describes his genre of music as “Emo Afrobeats.”

In the same vein, we have experienced a modernisation of classic genres like Highlife, Juju, Fuji, and Apala. You hear a bit of the modernised highlife in the music The Cavemen. makes. In Barry Jhay and Bella Shmurda’s music, you hear modernised Fuji. In Terry Apala’s music, you hear a newer Apala sound. Other artistes have resorted to Afrofusion, a sample of several genres, because they couldn’t be bothered to box themselves into one genre. You might say Zamorra (real name: Akinkunmi Oluwashina) belongs to this category. His style is derived from making art of several fusions, some you might even think impossible, and he makes it thoroughly enjoyable.

Zamorra, since his viral hit “Importanter” in 2018, has experienced significant growth in the quality of his music output, his sound, and the themes he explores. He still retains that unmistakable husky and heavily-accented voice associated with him. In the period of three years, he has naturally garnered experiences that now reflect in his music. In his debut EP, “Storms and Rainbows,” he chronicles these experiences and their eventual effect on his future and his music.

He opens the project with “Aiku,” and leads with a sample of popular primary/secondary schools jingles, a Yoruba singsong rendition of Monday to Sunday in an orderly fashion. In the fashion of debut projects, he prays to God for success in his career, for money and prosperity, for fame and fortune, and for grace. He prays that it all leads to praise in the end.

“Balance” follows with a faster pace. As his style of music is mainly premised on motivation, it continues in the same fashion as “Aiku.” Employing the popular rhetoric, “Life no balance,” he sings about how some people have more than they could use in a lifetime, and how others don’t have any at all and would often resort to doing a lot of things in order to even afford the most basic amenities. He asks for God’s blessings and protection so his hard work translates to his end result, as it doesn’t happen like that for a lot of people. The theme is reminiscent of the prayer said before eating, “Some have food, but cannot eat. Some can eat, but have no food…”

Mothers are often placed on a pedestal because it’s rumoured and even proven in some cases that they’d do everything they can to take care of and protect their children. It’s why men would often look for qualities of their mother in women they want to court. In “Like My Mother,” Zamorra follows the trend unashamedly and asks for a woman like his mother. He wants a woman that’d stand with him through thick and thin, one that’d take care of him like his mother does, one that is loyal, and black, and beautiful.

Using a theme similar to Wande Coal’s “Superwoman,”  Zamorra flexes his vocal ability in “Now You’re Mine.” In an affectionate tone, he sings to his beloved and thanks her and the heavens for her presence in his life. With every verse, the pitch goes higher and higher. In the end, with a voice filled with passion and appreciation, he sings in English and Yoruba, “Now that you’re mine, I give you my body and soul/Ma fimile, my dear o/Ko ma s’elomiran, my dear o,” and the song ends in a delightful climax. If you want an indigenous feel to your wedding, you should definitely play this at your reception.

“Men are scum” is a popular social media rhetoric often used by ladies when they have been wronged by men they are/were in relationships with. In “All Men Are Scum,” Zamorra sympathises with these women and acknowledges the struggles they go through: being cheated on, being called “our wife” by her boyfriend’s best friends when they are well aware of what he does behind her back; physical and mental abuse, among others. He then advises that if all men are scum, they should pick the best scum, and while it’s a funny statement, there’s an iota of truth in it.

Ironically, in “Deserve Better,” he represents the scum he talks about in the previous track. He is aware that he doesn’t do enough for the woman he’s with, and he tells her this, but apparently, she doesn’t want to let him go. Employing the cliché theme, “love will prevail,” it doesn’t bode well for their relationship as it’s an obvious fact that there are a bunch of factors other than love that keeps a relationship together.

He continues with “Taboo” where he speaks about wanting to provide for his parents before they pass. He asks if it’s a taboo to want to change his parents’ lives for the better. For this, he prays to God to “bless his hustle” so he doesn’t resort to other means out of desperation. For the closing track, “Timeless,” he sings in his Ondo native tongue, and shows gratitude. Like every artiste, he expresses his desire to be timeless.

True to the title of his project, “Storms and Rainbows,” he is aware that in life, there will always be good times and bad times, and most times, the latter comes before the former. On days when it seems like you will never catch a break and you are tempted to end it all, Zamorra assures that rainbows will come soon enough. He sings about the travails and woes one might come across in life, and he encourages one not to be deterred by them. “Joy will come in the morning.”

For a project coming from a relatively obscure artiste, “Storms and Rainbows” holds its own and is definitely worth a listen.