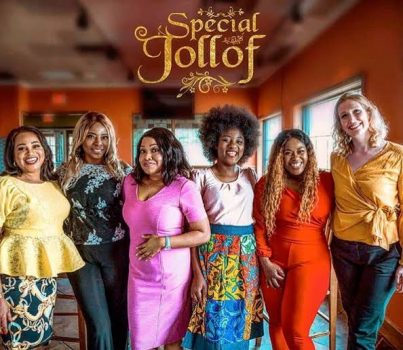 It is becoming a cliché for critics to say that a filmmaker must have enjoyed making a particular movie more than anyone would enjoy watching the movie. But it is a cliché that I am willing to risk for “Special Jollof,” an unexciting and overambitious flick that does not work as the romantic drama that it claims to be.

Produced and directed by Emem Isong, the 2020 romantic comedy centres Rachel (Magdalen Vaughn), an American journalist who gets a job at a Nigerian restaurant in the United States in her quest for a misguided revenge against immigrants. Of course, she falls in love with a “Naija boy,” Kenny (Joseph Benjamin), the businessman who owns the restaurant she works in. Set both in the United States and in Nigeria, the movie attempts to merge a love story with one about the immigrant experience.

The movie opens with Rachel getting out of bed and going through her morning routine with a smiling face, like a woman who expects to have a great day, before showing up at “Afro Spice,” a Nigerian restaurant, to beg for a job. It pretty much takes its time through its first act, as Rachel learns the ropes of her new job and gets comfortable with the Nigerians she works with. At this point, the movie appears to be off to a good start, with a mellow and light-hearted mood, and you get the feeling that a sitcom featuring a Caucasian woman trying to fit in as a waitress in a Nigerian restaurant might be a “Bob Hearts Abishola” type of hit.

Before long, Rachel meets Kenny. Their encounter is far from charming, but he understands that she means well, so he immediately starts falling for her. This is where the movie makes its first major blunder. It is bad enough that we can already tell from the first meeting that there will never be any chemistry between the couple. Yet, “Special Jollof” takes the awfulness a step further. Kenny wants to get a drink with Rachel, but she considers it inappropriate to be asked out by her boss. Kenny’s response is to jokingly pretend to sack her just so asking her out can be temporarily appropriate. The movie does not go as far as painting stalking and harassment as sexy like Samuel Olatunji’s “Dear Affy” does, but it still displays bad judgment in romanticising questionable conduct. In this #MeToo era, you would expect a “Nigerian American” film to understand the gravity of a relationship that starts with a power play such as this. Instead, “Special Jollof” considers it to be mere persistence.

It all goes downhill from there. Sparks never fly between the couple. We are never convinced that Rachel even likes Kenny, and Kenny himself is never sure what it is that draws him to her. This is a romantic comedy that never even gets the chance to be cute or, at least, cheesy. Ironically, after making that grave #MeToo error in the name of romance, the movie decides that the conflict between the love interests has to be a socio-political statement on bigotry and immigration, plunging itself into a black hole.

The real damage starts when the movie digs into Rachel’s past in a jarring set of flashback scenes. In the very dull second act, Rachel is revealed to not be who she claims to be, and seemingly grossly inexperienced Hollywood actors then flood the scenes in a bid to provide a backstory for Rachel’s sinister motives.

The problem is not really that the segue kills the mood. It is also not that romantic comedies cannot successfully be set against the backdrop of the immigrant experience. Hollywood’s “The Sun Is Also a Star” does a remarkable albeit boring job of merging romance and immigration. The problem is that it is handled in the most abysmal manner possible such that it would have been better if the subplot was left out of the movie. Between clichés and original ideas, there are a thousand and one good possible conflict scenarios for a movie like this. An American woman suddenly becoming bigoted because a Nigerian woman (who recently moved to the US from Nigeria but is played by a woman who cannot even bother to sound Nigerian) ruined her relationship is not one of them. A poor resolution to complement a poor conflict, Rachel suddenly becomes a changed person because she’s “just a girl who likes a boy,” and Kenny almost instantaneously forgives her because, well, na mumu dey love.

Meanwhile, Rachel’s Nigerian colleague, Ijeoma (Uche Jombo) has an entire subplot dedicated to her. Her uncle (Chiwetalu Agu) keeps calling her from Nigeria to return home to take a chieftaincy title on her family’s behalf. Ordinarily, exploring subplots through secondary characters would be a good thing. In fact, “Special Jollof” deserves some praise for imbuing its other characters with personalities, something that most romantic comedies fail to do.

The secondary characters in this movie do not exist solely to support the lead characters. But this ordinarily good thing still does not work for “Special Jollof.” It forgets most of the secondary characters and their stories too quickly. And when it does not forget, like in Ijeoma’s case, it veers off course such that it completely disconnects from the central story. The chieftaincy title subplot is, to put it simply, in the wrong movie. And even if the subplot is transposed to the right movie, it would still be a poorly done subplot. Save a market gossip scene where Ijeoma’s chieftaincy title is opposed, bestowing a title on a woman in a culture where it is clearly ordinarily unacceptable undermines whatever profound statement the movie producers might have intended. Instead, their intention comes across as a pretentious show of unrealistic cultural progress.

Thankfully, “Special Jollof” runs for just about eighty minutes. Yet, it manages to overstay its welcome with its arduous and unnecessary subplots. And for all its ambition, it fails at basically every assignment it takes up.