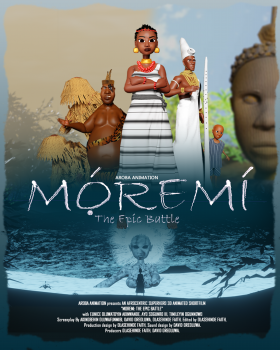 With “Moremi: The Epic Battle,” Aroba Animation is Set to Preserve Yoruba History

Mentioning their targets for “Project Moremi,” the team, in an interview, stated that the short film will premiere in Atlanta, at the Fintech Black Film Festival, organised by Imari Oliver. This will be a good way of sharing a traditional folktale and a bit of the African heritage with the world…

It is no secret that the Yoruba culture holds a great deal of wealth and historical depth. Known for its remarkable line-up of cultural repertoire, all over the world, the Yoruba ethnic group is popular for its beautiful craftsmanship, traditional delicacies – Efo & Amala – as well as their folktales, and general philosophy. Popular amongst the many is the story of Moremi Ajasoro, the wife of Oranmiyan, the heir to the King of Ife. Moremi showed bravery in saving her people who at the time were enslaved by a neighbouring tribe called the forest people, known to be as powerful as demigods. Moremi devised a strategy to free her people, which led to her pact with the spirit of the river, Esimirin, to make a great sacrifice (giving her son to the deity), in order for her to uncover a way to defeat the forest people. The Yoruba people owe their freedom to Moremi’s bravery, courage and sacrifice; hence the reason she is honoured, even till today, by the people. She is now referred to as Queen Moremi of Ife. To keep this heroic folktale alive and dilutable, Aroba Animation remade the Moremi story, only this time as an animation. In an exclusive with Afrocritik, Aroba Animation said, “our culture gradually fades out because our younger generation find the way our culture is being presented very archaic. Therefore, we took up the challenge to be Africa’s Disney.”

The choice of “Moremi” was a way of supporting the gender equality movement, a reminder of the importance of giving women a voice to stand for what is right and an opportunity to rule. In their words, “The story has it that Queen Moremi stood up for the people of her land. Looking at the issue of gender inequality and women brutality going on currently, we chose Moremi to show to the world the importance of giving women voice in the community and economy.

Lastly, we chose Moremi to tell the girl child that she can always stand up for what is right and what she strongly believes in, and who knows, her name could remain in the heart of men for as long as they exist.”

The short animation titled “Moremi: The Epic Battle” premiered at OOPL Abeokuta on Friday, 29th April, 2022, and has so far received commendations and support from several influential people both in the creative industry and beyond.

Mentioning their targets for “Project Moremi,” the team, in an interview, stated that the short film will premiere in Atlanta, at the Fintech Black Film Festival, organised by Imari Oliver. This will be a good way of sharing a traditional folktale and a bit of the African heritage with the world.

Animation in Nigeria is becoming quite entertaining and realistic, and the ability to evolve with the world is without doubt a step to development in the country’s movie industry. Showing their excitement towards this is the crowd and public notations on the premiere of Nigeria’s first full-length animated movie, Lady Buckit and the Motley Mopsters in December of 2020. The first Nigerian animation streaming on Netflix, is a win for the creative industry, a proof of a future with animation, and a door-opener to many other animators out there.

Just like Aroba Animation, Nigerian Animators, Kolawole Olarewaju, maker of the 2016 3D short film, Dawn of Thunder, and Roye Okupe, writer and director of 2019 3D animation film, Malika, are cultural superheroes, whose art is going to be cultural trademark in the future. The trio are a proof of the unexplored talents in Nigeria, and the need to believe and invest in animation.

On why the choice of animation, Aroba Animation told Afrocritik that: “We get a lot of this questions from individuals. One major way to win the heart of a child and teach them anything is presenting them with animation. In fact, many adults now see animations as much as children.

Animation tells the stories in a unique way because it creates a bridge between our culture that is fading and the foreign culture influencing ours. Presenting our culture in a foreign style makes it unique. There were exhibitions of superhero powers in the short film which many children are very fascinated about today. That can only be done via animation – cartoony or realistic.”

On funding as a general challenge faced in 3D animation production, the team revealed that there were no investors, as many saw no future in animation. Over the years, Nigerian animators have created skits and short shows such as Bino and Fino, Sade, and many others. While most of them are 2D animation, a good number are built in 3D, but not many have diversified into films due to the perennial issue of underfunding, as well as the time consumption and technicalities needed to make quality and successful animations.

Aroba Animation expressed gratitude for the warm reception of the “Moremi ” project, the commendations as well as criticism from the viewership so far, and hopes to cover more ground with time. They said that, “The short film might not be as perfect as Disney’s, but there is always a first time for everything. Aroba is Just one-year-old, but we are glad that we have successfully written our names in the history of 3D animation in Nigeria and we are not stopping there. We have learnt from our mistakes and noted them; we grow as we go; We are coming back with more historical 3D animations. Watch out.”

Moremi: The Epic Battle is not available in cinemas yet, as promotions and adverts are still on-going. However, the team at Aroba Animation is open to requests of private viewing at any location of choice.