Lady Buckit is unique, at least to a Nigerian viewer who has not been privileged to see these fantastical concepts utilised so close to home…

Growing up as Nigerian children watching animations that featured characters who were nothing like us might have fuelled our creativity or provided us with an escape into a different world from the one we knew, but it might also have instilled in us the subconscious idea that our lives were not story-worthy. We have always needed children-friendly animated stories that we are familiar with, and they have always seemed impossible to find. Thankfully, starting with Lady Buckit and the Motley Mopsters,  we might finally be getting some.

When Lady Buckit premiered in cinemas in 2020, it was met with a lot of excitement. Nigeria’s first feature-length 3D animation film to air on the big screen, the movie is produced by Hot Ticket Productions and 32ad Animation Studios, and directed by Adebisi Adetayo. After being selected to screen at multiple film festivals and winning the awards for Best Animation at the Africa Movie Academy Awards and Africa International Film Festival, the movie has recently become available to audiences on the Netflix platform.

Opening in pre-independence Nigeria, Lady Buckit follows young Oluwabukola “Bukky,” voiced by the young Jessica Edwards, a naughty but brilliant girl with a precocious talent for mathematics. Her attitude causes great concern to her mother (voiced by veteran Bimbo Akintola), and though her father (voiced by another veteran, Patrick Doyle) doesn’t express the same worry, even he can’t get her to pay attention to anything other than mathematics.

Bukky’s behaviour eventually leads to the closure of her parent’s bakery, and with a remorseful spirit, she wishes she could go back in time and fix her errors. Instead, she encounters a mysterious bucket that takes her to 2019. But she doesn’t time-travel as a child. Bukky is transformed into a bucket that lands in an ultramodern school. There she meets other inanimate objects that see and talk when no human is watching, from a mop to a single slipper. They go by weird but discernable names such as Mopps, Slipperhead, Dustee, Cupsticks, and Pantylegs. Bukky, herself, becomes Lady Buckit. Together, they are the Motley Mopsters.

Lady Buckit is already noteworthy for being a Nigerian first. But its setting is especially significant for two reasons: one is historical, and the other an issue of representation. The movie is set in 1956 in the Niger Delta town of Oloibiri, the time and place of the first discovery of crude oil in commercial quantities. That same year, Britain’s Queen Elizabeth visited Nigeria for the first time. Both historical events are referenced and used in creating a backstory that is ultimately too complicated for a child to understand (and even the movie admits this fact), but they also serve as a form of history lesson for a relatively young mind. After all, Queen Elizabeth’s visit and the discovery of oil do come up in entrance questions to secondary schools.

But on the other hand, and more importantly, the choice of South-South Nigeria, particularly Oloibiri, as the setting is an unusual move for makers of big-budget movies, especially those with a global audience in mind. The go-to choice is usually Lagos or, at most, a setting that is dominated by one of the three major ethnic groups. From the Nigerian Oloibiri to the Nigerian-American Black November: Struggle for the Niger Delta, and the British Blood and Oil, the few major films set in the South-South are overwhelmingly focused on the militancy and destruction that result from the exploitation of crude oil in the region.  There is little to no representation of the region and its people outside of the perils of crude oil.  But Lady Buckit makes a refreshing difference in this area. It recognises the history of Oloibiri, but it focuses on the people just being people. For once, we can see Oloibiri as a living place with ordinary people, and as more than just a ravaged, warring town.

But even if we put all those significances aside, the movie still has a lot going for it. Lady Buckit is considerably fascinating. A lot of the appeal stems from the fact that it is unfamiliar territory. The movie’s idea to transform a person into an inanimate object is not new; Beauty and the Beast already did that. Neither is the idea to give inanimate objects animate qualities; Toy Story did that, too. Still, Lady Buckit is unique, at least to a Nigerian viewer who has not been privileged to see these fantastical concepts utilised so close to home.

Even more, the reality is that many Nigerians have hardly seen any proper animation from the country. That this one is available on a much wider scale than most and is good enough for long enough, albeit with a few glitches and some out-of-place life-action images, is impressive or, at least, enough to capture attention. Plus, the movie is often so relatable and so Nigerian that to an adult viewer, it is a strong reminder of how beneficial it would have been to have had quality Nigerian animations available during one’s childhood. 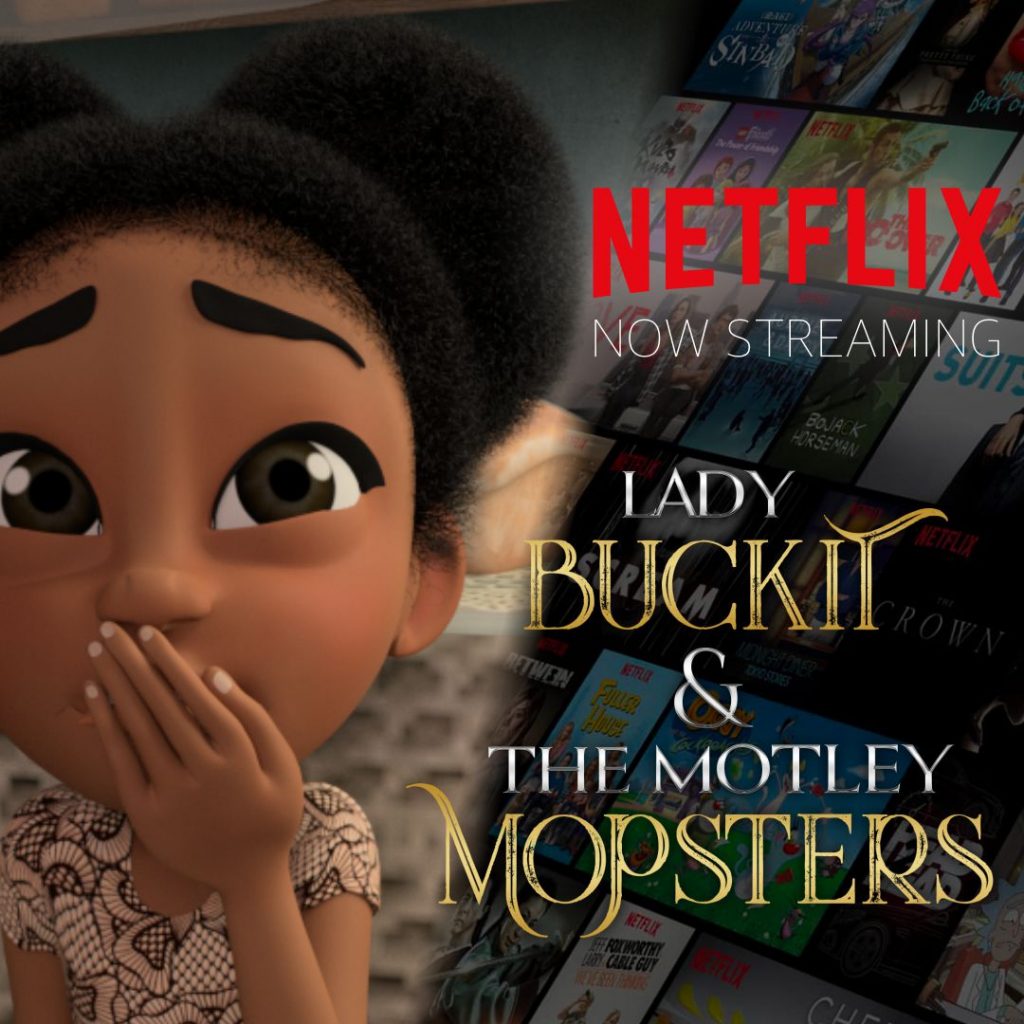 However, to a young mind, although Lady Buckit is sufficient entertainment, the story will likely be difficult to follow. The movie arrives at its conclusion only after a tedious journey, and the moral lesson it aims to pass is difficult even for an adult to grasp. It would have been helpful if the musical numbers are memorable or easy to sing along to, but they often pop out of nowhere, they hardly get completed before they give way to another scene, and they almost never seem to have a young audience in mind. Perhaps, the only song that stands out of the bunch and blends in with its surrounding scenes is Lady Buckit’s song about mathematics. But, thankfully, the songs are never so long as to be tiring.

With Lady Buckit, Jessica Edwards joins the growing list of child actors who are proving that Nollywood casting directors are now casting better child actors. David Edwards, who voices the part of Tamuno, a student Lady Buckit has to help with maths, does a considerably decent job, too. They are supported by Akintola, Doyle, Kalu Ikeagwu, and other cast members who expectedly render mostly befitting performances. It must be mentioned, however, that the child actors are surprisingly better at pacing their speech than many of the adults, including the veterans, whose performances are almost marred by a slow speech that over-infantilises viewers, even if said viewers are children. The casting choice for the students is highly questionable, too, with adults voicing the parts of children quite unconvincingly.

Yet, despite its flaws, Lady Bucket and the Motley Mopsters is a win for Nigeria’s animation industry. We might be late to the party, but, hopefully, we will get more and even better animations. And sooner than later, we will have animations that we would very easily choose over the likes of Disney.