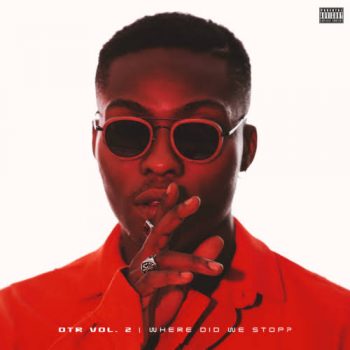 Reekado Banks maintains his sonical superpower with “Off The Record 2” by being able to wield a calm, subtle, yet intricately groovy record, pouring all his lyrical, language and culture-stewed gems into the mix

When, in 2016, Ayoleyi Solomon pierced through the curtains of the Nigerian music industry , with his smashing debut dubbed, “Spotlight,” it was clear that this young maverick was a talent to reckon with. The 27-year-old singer, professionally known as Reekado Banks, has cultivated a music persona that is not just versatile, but densely introspective and emotive. If you need to confirm these, listen to his just-released third album , the 8-track EP dubbed, “Off the Record Vol. 2 (Where Did We Stop).”

Reeky Bam Bam, as he is fondly called, started charting a course with emotional vulnerability and profound introspection, with his sophomore album dubbed “Off The Record Vol. 1,” which was released in the middle of the global pandemic year. Amidst the myriad tragedies that unfurled last year, Reekado Banks stepped out with a very emotive-yet-groovy record, which surprisingly fell under the bus, regardless of how stellar it was.

Perhaps, more Nigerian listeners only appreciate his hit singles from his albums, rather than embrace the work cohesively, or perhaps we have been so ingrained with our lust for mindless competition that we forget to properly inject ourselves with good music. Or perhaps Reekado Banks needs stronger media promotions. The root of the matter is not quite clear. However, this same paradox of the underdog superstar has now become the bedrock of “OTR Vol. 2,” birthing the singer’s best body of work so far.

“I had been busy, like the road itself. Everyone hadn’t seen or heard from me and they had been asking where I’ve been, but I have been busy,” the singer says in a recent interview, explaining the inspiration behind the EP’s lead single titled, “Ozumba Mbadiwe.” He notes on prioritising his off season, making new music and embracing more self-awareness.

This same “perceived” sabbatical could have been more logical, if it was highlighted last year; because prior to the last album he had spent a four-year hiatus dealing with his exit from Mavins Records, switching managements, as well as staying relevant with hit songs in the game. He mentioned in some of his interviews that he had always had a stash of music waiting to be released. Now, he returns, with a self-motivating, mid-tempo groove that not just solidifies his artistry as one of the industry’s best, but also stamps him as one that is here to stay for a long time.

Spinning off the record with “Pulling Up,” a laid-back sensual bop which reminds you of Reekado Banks’ vocal prowess, the album ushers in a glaring reminder that Afrobeats is experiencing a prolific shift. From Wizkid’s “Made In Lagos,” which packs a horde of slow-burning jams, with a melange of synths, piano chords and tropical rhythms, to Runtown’s “SoundGodFest Reloaded,” and a host of others, Afrobeats has begun to experience a scintillating melody rush which is more globally appealing, and brilliantly tailored for both the eardrums and the dancefloors.

Banks continues his “OTR” momentum with “Ozumba Mbadiwe,” which is the introspective track that explores his yearning for serenity, to a memorial of the October 20, 2020 shootings that occurred on that particular road in Lagos. He switches up the vibe with an Amapiano bop with the Street-hop lord, Zlatan Ibile, dubbed “Lupita Nyongo,” which brings up the question: Is Lupita Nyongo now the standard for rare feminine beauty? Nonetheless, it is a beautiful record that acts as a midwife for the remaining records on the project.

The project paces down towards the end with a smashing love rhythm dubbed “Selection,” and another uplifting optimistic RnB joint dubbed “Self Esteem.” Cohesively, the project feels satisfying, with rhythms that interflow. From the trumpets, to the kicks, to the chords, the entire project seams effortlessly, sound-wise. And the content-direction for this EP just reflects the brilliance of the A&R of its tracklisting.

The production on “OTR 2” is also worthy of commendation. P.Priime stands out as guru in his field, for the harmonies on “Ozumba Mbadiwe.” Other icons such as Biggie Jazzy, Jesse Sokari George, Parker Ighile, Ola Gold, Baba Tunde Bello, and Marv, had their midas touches on this project. However, the icing on the cake is the fact that Reekado Banks openly admits to using songwriters on this project – a trait his colleagues in the industry should imbibe.

Reekado Banks maintains his sonical superpower with “OTR 2” by being able to wield a calm, subtle, yet intricately groovy record, pouring all his lyrical, language and culture-stewed gems into the mix. While the indie singer is also notable for his seasonal party-banging bops such as “Ozumba Mbadiwe,” “Rora,” “Turn Up,” among others, he is also a brilliant and story-focused artiste whose discography should be on global charts and on award plaques, all things being equal.

The focus now is on finding where this road that Banks is on will lead to. Does he continue to explore the trains of Afro-fusion? Does he continue to remain as versatile as ever? Should he experiment further? Should he drop a project every year? It just highlights more work for his A&R team, because sound-wise, Reekado Banks has still got it like he always did. Maybe even better now!

With the college-trained historian breaking into the industry with an unexpected Mavins Records deal, winning the Headies Rookie of the Year Award, to standing alone, Reekado Banks continues to prove his mettle as a focused and an intentional artiste. On “OTR 2,” there are no bad songs. And cohesively, there are no flaws with the project. And this reflects that we are indeed within very interesting times for Nigeria’s music industry.

Chinonso Ihekire is a freelance music and culture journalist based in Lagos, Nigeria. His critiques and writings have appeared in pan-African publications such as The Guardian, Wakonte, and More Branches. He enjoys exploring and documenting Africa”s thriving contemporary art evolution, especially in Music, Film and Lifestyle.
Connect with him. Instagram – Chinonsotherevolutionary. Twitter – Chinonsoihekire