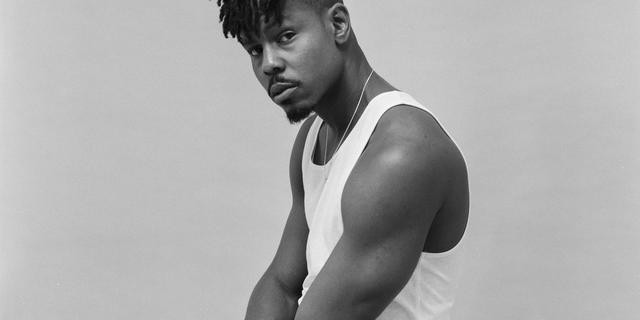 …the rapper has ditched his low-cut hairstyle for a sideways dreadlock, he is now more active online, and has two smash hits under his belt… Providence encapsulates the current mood of Ladipoe and what he hopes to achieve in the future.

In 2020 when the world was battling with COVID-19, Ladipoe was raking in a million streams. He became the star attraction in the Nigerian music industry. The then sleeping audience gave him the much-coveted attention after his duet with chantress Simi went viral.

A year or more later, he made a comeback with “Feeling” which featured an infectious hook from singer Buju. “Feelings” became one of the most played songs in the second half of 2021. At this period, the world was just returning to normalcy.

Born in Lagos over three decades ago, Ladipoe’s childhood was shaped by his upbringing in Lagos Mainland. He gave music a chance after he returned to Nigeria at the end of his education at the University of North Carolina. He got the needed push-up courtesy of the rap group, Show Dem Camp when in 2013, he got a spot on their breakout single “Feel Alright.”

Four years after this feat, Ladipoe got signed by Mavins records. The Don Jazzy money and apparatus came in handy for Ladipoe as he opened shop with “Man Already,” a prophetic song about his prospects and antecedents. The Tiwa Savage-assisted “Are You Down” failed to elicit much attention.

In 2018, Ladipoe released his first project which he tagged “Talk About Poe,” a sonic diary. The tape featured the then-emerging Tems, as well as Seyi Shay, Sir Duada, and others.

On November 4, 2021, Ladipoe released his second project which he tagged “Providence.” The 21-minutes-plus-long play consists of six dazzling tracks and three features.

“Let me introduce myself/ In a way that you will understand me/Nigeria’s best chance of a rapper winning a Grammy,” Ladipoe raps in the first version of “Leader Of The Revival” which snapshots his aspirations.

Two years after the release of LOTR, he comes back with “LOTR 2″ as the first track on Providence. This time around, he had the ears of the industry. The dream of winning a Grammy as a Nigerian rapper now looks more realistic—two of his Nigerian brothers, Wizkid and Burna Boy, already have the plaque on their shelf.

On “LOTR 2,” Ladipoe retains the ambient beat mode of the first. Instead of the strings and baseline, the instrumental is now made up of Hi-hat, violin, synth and string. It serves as the vehicle for the poetic articulation on the track. Beyond the pomposity he exhibited on this track, some golden nuggets were dropped for the fans to reflect on: the rhyme of Fans Only and Only Fans are poignant. In the face of censorship, the pause in the pronunciation of H*te is phenomenal.

Fireboy, Joeyboy and Rema are prominent members of the new school vanguard of Nigerian music. Ladipoe completes the collaboration trilogy as Rema comes up on the bopping “Afro Jiga.” On “Afro Jiga,” label mate, Rema comes through with the hook and a verse. Beyond the self acclamation, you are bound to lighten up when you hear lines likes: /Our music now is opening doors you can never close/ They tell me that Afro’s bigger than hair on an older Hov (ou)./

Ever since he joined Marvins, Ladipoe has added more flavour to his rap style, he switches both ways, appealing to different discographies. On “Law Of Attraction,” he tetters to soul. The song which runs like a conversation between two lovers is laid on a single string, synth, and baseline. The unnamed girl compliments his excesses, and she meets him at the midpoint. Without reading the lyrics, the essence of each line might get lost on you.

“Running” is the second coming of “Feeling.” It was produced by the same Andre Vibez. The song harks into the narrative of “Feeling,” this time around Ladipoe’s attempt at satirising the state of the nation, the fakeness in the industry, the bad news which fills newspapers in Nigeria, and the pressure of Nigerian superstars. Lines like: / Cause life is no joke/ we cope with comedy/ are stark representations of Nigerians. Comedy has become the go-to form of online enjoyment. Fireboy deviates from the narrative, he speaks more about his accomplishments: /Afrobeats or na kpangolo/I took that shit international

Ain’t leaving until it’s time to go/Galloping like I’m an antelope/Ou haI took it personal/Lone soldier me I dey stand-alone/Me I dey fight for my envelope. But me I no fit to dey fight alone/.

Ladipoe taps Ghanaian-born but US-based Amaare for “Love Essential.” Cupid arrows are what every adult experiences. Amaare and Ladipoe explore the themes in this song. It’s a recollection of things that happen in a relationship: the confusion as well as the ego. Amaare’s falsetto flows on the song while Ladipoe’s rap is more reflective and compassionate. The project races to the finish line with the eponymously titled track.

“Providence” retains the warm mood of the project, thematically, and serves as the climax to the opening number “LOTR II.” It chronicles the next aspirations of Ladipoe: the new mission of taking the music to Africa and possibly to the world.

“Providence” comes three years after the release of “Talk About Poe.” Within that space, there have been some changes: the rapper has ditched his low-cut hairstyle for a sideways dreadlock, he is now more active online, and has two smash hits under his belt. “Providence” might be without the much-needed club banging tracks for a “detty” December, but it encapsulates the current mood of Ladipoe and what he hopes to achieve in the future. The brevity makes it more cohesive and lays the right foundation for his next year’s album.