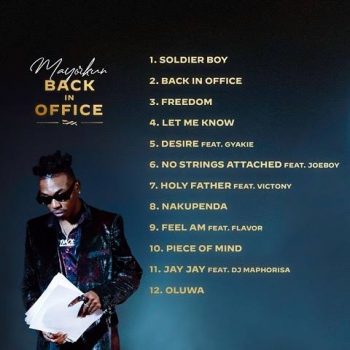 “Back in Office”: Mayorkun Evolves on Sophomore Project

In 2021, he was recruited by Sony Music West Africa, a move that necessitated his over six-month break from releasing music. By the time he returned with the laid-back “Let Me Know” in August 2021, his fans were eagerly waiting for him…

Five years ago, Mayorkun was stuck with a marketing job at one of the new generation banks. A mere WhatsApp call from Davido changed his life overnight. He grew from the love and attention-starved guy of “Eleko” and “Posh.” He cemented his place in the music industry with the release of his debut album “The Mayor of Lagos” in 2018.

“Mayor of Lagos” was an ambitious title backed by lamba sounds. Even before the release of the album, Mayorkun was already the darling of the Lagos Metropolis when he performed at 35 campuses on his university tour in 2017.

In 2020, he had one of the most exciting runs of his career when he ditched out singles from the grime-inflected “Geng,” to “Betty Butter,” down to the Amapiano-sampled “Mayor of Lagos.” He also got nominated for the artist of the year at the 2020 Headies Awards.

In 2021, he was recruited by Sony Music West Africa, a move that necessitated his over six-month break from releasing music. By the time he returned with the laid-back “Let Me Know” in August 2021, his fans were eagerly waiting for him. He picked up from where he left off. The industry missed him, however there was a twist in his sonic direction now. This became glaring on his sophomore which he tagged “Back In Office.”

For an artist who went on a hiatus for that long, naming the album “Back In Office” was apt. The collaborations are scanty, and he explores other genres outside what he is known for.
The trio of Fresh VDM, Speroach Beats, and Phantom, makes a return as members of the production team having been part of “The Mayor of Lagos” in 2018. They were joined on the train by Telz, Clemzt, Que Beat, Semzi, Junior Taurus, Phantom, Tempoe, DJ Maphorisa, and Kabza De Small.

“Soldier Boy” and “Back in Office” were the two opening numbers on the album. On the former, a piano chord, synth, and kick open the song, Mayorkun shares a snippet of what he has been through. It’s a self reassuring reintroduction rife with positive affirmation. He takes it to the church towards the end with the choir-like backups.

In 2014/2015, singer and rapper, China Pee made waves with his street-inspired “Eko Oh Jina.” Mayorkun sampled the riff of that instrumental, combining it with the Amapiano element while the Saxophonist blared his horn. It’s a reassuring and self-conceited Mayorkun at its best:

Mayorkun switched from pop to championing the cause of his people on “Freedom.” It’s usual and has all the elements of the African sound, from the opening grand drums to the strings, trumpets, which were all in harmony. He speaks for his people. Beyond being a Mayor of Lagos, he speaks for the entire black continent, and the place of Lagos in Africa’s conversation cannot be questioned.

His 2021 first single “Let Me Know” made the tracklist for this project. For a mid-tempo track that alludes to ballads, Mayorkun swirls from topics like betrayal, lack of confidence, mental health before hitting the hammer on the nail — desire for a woman.

Ghanian Gyakie had the upper hand with her falsetto on “Desire.” It continued the unfinished story of “Let Me Know.”

Mayorkun returns to his lamba mode on the Joeyboy-assisted “No String Attached.” It is uptempo, and it reawakens the million-dollar question of the place of money in relationships.
Victony’s infectious hook comes to the rescue on the pun-filled “Holy Father.” Rendered in English, it’s a post-breakup song. Injected with masculine vulnerability, it underlines the pain caused by the girl.

With Lagos and other cities under his belt, Mayorkun seems to be on a journey of spreading his music to other cities. He leverages on the Swahili language for Nakupenda which sounds like a track tailored for the East African market. He replicated the trope on “Feel Am,” this time around, paying paeans to popular Igbo big spenders. The language might not be pristine like a native speaker’s, but it is commendable and shows an artist who is ready to learn, to win more fans into his fold.

“Piece of Mind,” “Jay Jay,” and “Oluwa” are nods towards reflection and party. “Jay Jay” is the link between the three. On “Piece of Mind,” Mayorkun reveals his weakness. On “Jay Jay,” he pays tribute to the legendary Super Eagles’ former captain, Austin Jay Jay Okocha.

“Oluwa,” which ends the track, shares a similarity with pop gospel. Helped by a sax solo, Mayorkun reflects on his growth, and drops words for the greedy politicians, while the backup singers do magic with their voices. What a way to end an album.

Three years after releasing his debut album, it’s evident that Mayorkun has undergone a maturing stage in his craft. These and many more are reflected in this 34-minutes-long play. “Back in Office” is a paradigm shift from “The Mayor of Lagos,” in the topics, sounds, etc. He deviated from his known path, unraveling a new sonic direction for the next stage of his music career. The lyrics are well-written, and there is a subtle muzzle on lamba. At the end of the play, a new Mayor was born, he would be here for a while longer.

Back in Office Mayorkun Nigerian Music Industry The Mayor of Lagos