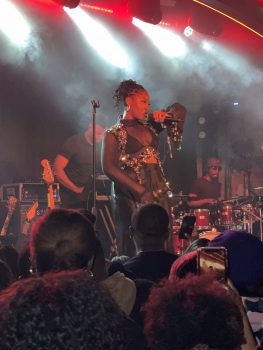 These studios are doing a thankless job, even though they are improving tremendously the frontiers of Afrobeats locally and internationally…

Until recently, acoustic versions of studio-released songs were not a very popular concept in Nigeria. To listen to a live rendition of an artiste’s song, you had to attend their concerts or events. Singer, Jon Bellion, released acoustic versions of his songs and it made listeners feel something otherworldly, an emotion many couldn’t quite describe.

Cool FM took the initiative to start this with its Aux Sessions, but they still weren’t original acoustics, just the artistes lip-syncing to the original versions of their songs. In 2019, Clout Africa followed suit and introduced the African music scene to the proper concept of acoustics and live renditions for the artistes. Some of their early guests were Fireboy DML, Joeboy, among others.

In 2021, Glitch Africa opened shop and their very first guests were Buju, who did a live rendition of Outside, and Ruger, who did live renditions of songs off his debut EP, Bounce, and Abu Dhabi. Since then, Glitch Africa has managed to capture the pulse of the new generation with their videos. These studios are doing a thankless job, even though they are improving tremendously the frontiers of Afrobeats locally and internationally.

Here are six acoustic videos that have proven to be more endearing to listeners than their original versions.

Shortly after an announcement by the label’s boss, Don Jazzy, Mavins Records’ newest signee, Magixx, released his eponymously-titled debut project in September of 2021. It’d be key to note that his predecessor, Ayra Starr, was also introduced to the Internet and the Nigerian music scene in this fashion, and her fame gradually grew and shot through the roof months later after her viral lead single, Bloody Samaritan. It is suspected that the record label’s PR team expected the magic to happen a second time, but that remains to be seen. After Magixx’s debut extended play was released, I listened to it weeks after but I wasn’t very impressed, so I didn’t go back to it.

Fast forward to February 2022, the music artiste announced that he’d be releasing a ‘re-up’ of one of the songs on his debut project, Love Don’t Cost A Dime, with label colleague, Ayra Starr, as it was the season of love. I was out on Valentine’s Day when I heard a snippet of the song. My curiosity was piqued, so I decided to check out the song on Spotify. Imagine my pleasant surprise when I realised it was really good. In the coming days, the song was constantly on repeat and soon after, I had learnt all the words to it. A couple of days back, as I surfed through YouTube, I came across an acoustic of the original version of the song on Glitch Africa. I clicked on the link, and, oh, the sensory pleasures it gave.

There’s something magical about stripping a song of its studio finesse and simply listening to the artiste sing their heart out with a live band or instrumentals. What we have here is Magixx baring his soul and telling us that he wants a love without the prerequisites of financial buoyancy. “Love doesn’t cost a dime, so why should I pay for it?”

When Magixx arrives at the song’s pre-climax with, “and omo, say me bless the lord for the day you come my way/can’t explain the feeling but omo say me i like it/love me like a gangsta, man ah feeling highray/other girls them gold diggers, alladem a pirate,” the live band elevates the song to an entirely new level with the introduction of drums. The artiste’s vocals, the music instruments and the cinematography, amongst other things, are sure to make you swoon.

After the release of her debut EP, For Broken Ears, in 2020, songs like Damages and Free Mind peaked on charts, while songs like Higher and The Key were mostly second-bracket, minority favourites. The fact that they were minority favourites doesn’t take away from the fact that the songs were brilliant; they just didn’t cater to the popular sound like the songs in the first bracket did. Higher is a perfect embodiment of her musical genre, “Spirit Music,” an infusion of several concepts: neglect, rising above a certain level, wanting better for oneself, leaving, etc.

In this open mic organised by Genius, Tems performs a slightly different variation of the song. Her words are better enunciated, and while she’s laid-back with the singing, you still hear the soul behind the sound. When she sings, “Higher than all the limits,” she believes it, you believe it, and you are left with a sense of liberation.

When Oxlade released his second project, Eclipse, in August 2021, it would not be an exaggeration to say that a sizable number of his fans were quite disappointed with his offering. Four songs capped at a little over 12 minutes and we weren’t exactly hearing the Oxlade we’d been listening to since the success of his song, Away. And while an evolution of sound is allowed and even encouraged, this artiste that made us fall in love with his falsetto and made hits out of almost every song he released, was nowhere to be found. Perhaps, it was still the early blues? An argument like that is often made for Wizkid’s fourth studio album, Made in Lagos. After its release, a lot of people who didn’t understand his new sound called it a flop; but look at it, almost two years later, it is still thriving on the charts and has been nominated for a Grammy. A classic!

Before his live performance, Oxlade gives a bit of context to what the song is about, and so when we watch and listen, we already have a picture/scenario in mind. With the assistance of a brilliant guitarist and that falsetto he’s well known for, Oxlade decidedly changes the narrative about Pay Me and its appeal. And apparently, this is a popular opinion as the most liked comment under the video says, “Even if they kidnap Oxlade, e no fit ever miss.”

Produced by D’Tripps, Lyta enlisted his label’s boss, Naira Marley, and colleagues, Zinoleesky and Emo Grae on this track that soon spread like wildfire after its release. In Are You Sure, Lyta asks a question lurking in the minds of many people whose relationships weren’t defined.

He soon got the streets singing along to the chorus, “Baby, are you sure that you want me?/Baby, are you sure it’s not the Hennessey o?/Cos’ this feeling gat no remedy o, and I no wan share you with nobody.” Inebriation can often confuse people and Lyta just wants to make sure that the woman’s feelings are genuine.

In the live rendition of the song, the background sound is slowed down to have an R&B feel. The song is better for it. Despite his small frame, his charm shines through during his performance, and he spices the song with another verse as the people he featured on the original song are not present to perform with him. The question is better emphasised now and compels an answer.

What is a listicle about acoustics without the inclusion of Victony’s memorable rendition of Holy Father? The song, already an instant hit when it hit streaming platforms, only felt better after Victony did a performance of it at Glitch Africa. I’m not going to ruin this with many words. Watch and decide for yourself.

If you have the patience to listen till the end, your auditory nerves will benefit from hearing a rendition of another song on which he was featured and was released a month or two before Holy Father. It’s called Rosemary. He performs this with Savage.

The 7th track off Ayra Starr’s debut album, 19 & Dangerous, is Beggie Beggie with CKay, another minority favourite. In the song, Starr wonders aloud why she has to beg to be loved. She admits that he’s “spec” enough to court the attention of other women, but she, too, has her own top-tier qualities. “I know say you be hot cake, hundred yards husband material/but me sef I be hot cake, hundred yards wifey material.” The collaboration is a perfect blend of both artistes’ vocal abilities and it’s one of the most sonically excellent tracks off the album.

The live rendition is just two artistes comfortable in their skin, flexing their vocal prowess, and enjoying themselves. A rarity.