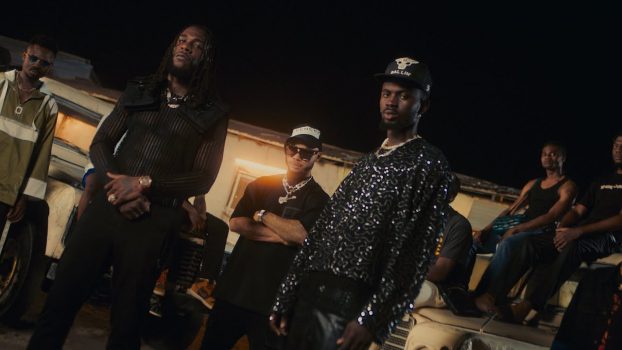 The New Sherif in Town, Kwaku Frimpong, is Fired Up in Visuals for “Second Sermon” Remix

Black Sherif deserves all the applauds coming his way, and if his recent works are anything to go by, then we are in for a big treat…

Mohammed Ismail Sherif, popularly known as Black Sherif, is arguably the hottest act out of Ghana West Africa at the moment. And at the young age of 20, he has already been charged with the responsibility of taking Ghanaian music to global heights. With so many hits under his belt within a short period of time, it’s no wonder many have begun hailing him as the “future” of Ghanaian sound. Born in Konongo, a gold mining and manganese community located in Ashanti, Ghana. The artiste who is also known as Kwaku Frimpong, has often talked about his love and admiration for Nigerian artistes, and how open he is to the idea of collaborating with some of the country’s finest acts.

On the remix of his song titled Second Sermon, The Ashanti rapper puts his money where his mouth is by featuring one of Afrobeats’ leading voices, Burna Boy. The song is produced by Ghanaian Stallion, and the video was directed by one of Africa’s most sought-after directors, Director K.

The video shows Black Sherif being chased by a mob in the hood. He eventually gets caught and pummeled by an angry mob, until Burna Boy arrives at the scene. With his gang, Burna comes to Kweku’s rescue. Burna is later seen handing Black Sheriff a note. This could be taken as a metaphorical illustration of Sherif being ahead of the game, while other industry artistes are playing catch up.

Black Sherif is famous for shooting his videos in the hood, possibly as a constant reminder of the harsh realities many Africans and African youths live in today.

He depicts the travails and hardship that’s still very much present in Ghana. Possibly due to his love and empathy for the streets, his lyrics are a clear indicator of him being a champion of the down trodden.

A synergy of musical and cultural influence has long existed between Ghanaian and Nigerian artistes. Dating as far back as the late ‘90s, it has given birth to some of the continent’s biggest anthems. In the past we’ve had artistes like Ghana’s V.I.P collaborate with 2face Idibia, Tic Tac and Tony Tetuilla, Wizkid and R2bees, R2bees and Wande Coal, Sarkodie featuring Runtown, and most recently Gyakie featuring Omah Lay, to mention a few. This is regardless of the comments made by artistes like Ghana’s Shatta Wale who claims there’s been a disservice done and that these collaborations have only helped promote Nigerian music in Ghana and have not been mutually beneficial. This narrative has however been proven to be baseless and unfounded, particularly, because some of these artistes and songs have also gone on to become household names and anthems in Nigeria as well as Ghana.

When the original version “Second Sermon” came out in 2021, my immediate thought was for him to get Burna Boy on the remix. The gods of music must have communicated those wishes to Black and made him listen. On this song, the two artistes, complement each other’s styles with their lyrical dexterity and complex flows that set them way ahead of their peers in the game. Black Sherif’s energy is unmatched, and in this video, he brings that fire and youthful zest to the set.

Director K was once again at his absolute best on this one, this time delivering some awe-inspiring shots. From an aerial angle with the help of the drone camera, he depicts parts of the ghettos in Ghana, showing Black Sherif being chased off through some of its street corners. The precision on some of these angles was spectacular. There were moments when I completely forgot that I was watching a music video and imagined I was watching a recently released Ghallywood blockbuster instead. There were also a few cameo appearances made by some celebrities as well; most notably the prolific Nigerian dancer, Poco Lee.

However, my favourite scene was the reunion scene where it seemed like they were all having a get-together, presumably celebrating Black Sherif’s escape from the mob. Another of such scene was when Sherif lay with his back on the ground, while he was getting beat up, and yet was still rapping.

There has been a sudden increase in the use of drones by music video directors recently, to capture pictures from great heights. The drone camera is slowly replacing the use of cranes in the music industry, it has become a more preferred option considering the fact that it is less stressful, at least when compared to the logistical nightmare that sometimes comes with the use of cranes. However, it still takes great skill to be able to master the drone camera. The required skill needed to navigate a drone in the air with aplomb, in order to obtain the desired angles, comes only after a long time of constant practice, which obviously, Director K has put in and has demonstrated beautifully in this video.

The video was very well put together, the story and concept behind it was well-executed. The director outdid himself this time. Black Sherif deserves all the applauds coming his way, and if his recent works are anything to go by, then we are in for a big treat. Ghana, stand up!

Omowale Michael Bokinni is a trained Cinematographer and Screenwriter. He is an Alumnus of the prestigious Royal Arts Academy Lagos. Passionate about all things music, movies and entertainment in general. He is also an actor who has featured in a number of Nollywood movies. Most recent; the Royal Arts blockbuster, Bitter Pill.
Instagram @omowalebokinni
Twitter @bokinnio.