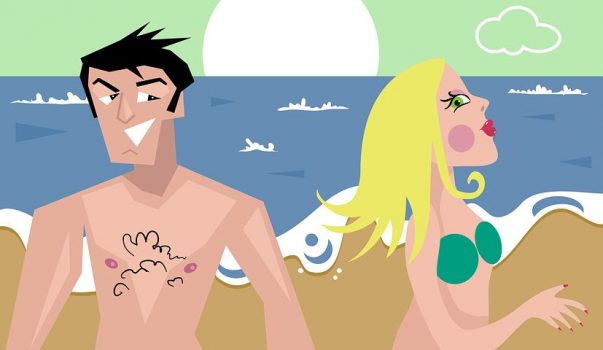 Female-Engineered Domestic Violence is as Wrong As its Gender Flipside

Humans are predisposed to dwell on main themes thrown at them daily in society than those sub themes that never make the highlights. This explains why there seem to be less data on the issue of female-engineered violence in the world today. It is difficult, hence, for people to comprehend the possibility of a man being abused by a woman, a partner or spouse. Women are generally considered to be the most susceptible. Men are speaking up against this notion, and views are currently shifting.

No one can be faulted for this belief, nonetheless. People are wired to believe what they see and what is constantly re-echoed to their hearing. History, and even the present, bear the stories of women who have been bartered by their male partners in a relationship. The truth, however, is that men go through abusive relationships with their partners and spouses. There is the well-known, depressing pictures of women with black eyes, bruises, and children chorusing her tears, and neighbours and friends trying to comfort her. This is typical in Africa. How fascinating would it be to open the door and see a man with a black eye and bruises? People are unlikely to think about the possibilities of a man being abused because of the femininity of the woman and the perceived physical superiority of a man. This stereotype makes it difficult for men to open up and talk about the abusive relationships they have had or still have. There is the fear of being perceived as weak and unable to live up to masculine expectations.

A study shows that one out of four men gets abused in a relationship. Some of them have been victims of rape, verbal abuse, physical abuse, emotional abuse, and other forms of abuse. Over 50 men spoke out on the abusive relationships they had and still have. Most of these cases are not heard due to the issue of under-reporting which is rooted in the aforementioned reasons

“My wife kept suspecting every of my moves through out the first two years of our marriage. She was so insecure and believed that I had other ladies outside,” says Moses, a respondent I interviewed (full name withheld). “One time, she smashed my phone on the floor, and another time she poured soapy water on me. I’m glad she didn’t use hot water on me because she threatened to. She would rain insults on me, call me names and compare me with her exes. These are just the few details I’m ready to share now. The painful part is that I had never cheated on her. I could not even imagine doing that to her, but she never believed me. She hasn’t changed, although it’s not like before. I can’t divorce her. The last time I tried it, she started playing the victim and cooking up stories. People blamed me for not putting my house in order, including my immediate family. She is the one that needs to put herself together and not me. ”

Similarly, it was not until the court was able to prove that Amber Heard defamed Johnny Depp on all three counts, that many believed that Depp was innocent of the allegation. During the court case, Heard provided pictures that were later proven to be heavily edited, to support her claim. Her supporters believed her over Depp, and gave her emotional support during the entire process. This is typical of today’s society. Shockingly, due to the many men-based stereotypes we have always had, they are several men with similar and worse experiences who cannot as much as speak about them. Many others have been prosecuted for cases that they had nothing to do with.

Speaking entirely personally as a male victim of abuse, today's verdict isn't a 'win for abused men' but a chilling precedent that will prompt abusers to silence and punish survivors in defamation suits. Abused men and boys were already winning within #MeToo.

“It was a simple argument that happened between my girlfriend and I. I was not even done talking when she angrily used a spatula on my head. I was unconscious for some seconds. The cause of the argument was that she had seen a text on my phone that gave her concern. When I tried to explain, she said I was telling lies. It took me weeks to gain control of my body. I was bedridden for days. I did not tell anyone, up until this moment. I thought no one would believe me because I felt they would say I should have defended myself. But I didn’t see it coming and even if I did, what would I have done? That experience broke me. I’m yet to start any relationship because of the pictures I have on my mind,” says Mr Felix Ataokolo (real name).

It is mostly believed that a blow from a woman is not as intense as that of a man. While this may be a fact, the truth remains that both parties were slapped, and that sits well in the category of physical abuse. The silence, as well as the mindset that men are the “stronger vessels” while woman are the weaker ones has eaten too deeply into many men that when women perpetrate violence against them, it is perceived lesser than abusive. Many men have a narrow definition of what constitutes abuse in a relationship and fail to understand that they are being abused, especially when it is not overtly physical but verbally, emotionally, or sexually.

“I had woken up to a sudden punch from my wife once. Her hand came landing on face with so much strength. I didn’t expect it because I was asleep. The next thing I heard was, ‘why did you change the password to your phone?’ I was furious and at the same time in shock. The phone was mine, I can as well choose to change the password at any time I desired. She went on about how I had things to hide, how I was planning to leave her and the kids to suffer, and so many other things she kept on saying. This is the same woman that has cheated on me on several occasions and I didn’t send her away. Once she locked me inside and prevented me from going to work. Her reason was that I won’t go out to meet my numerous girlfriends. When I told her family, they started questioning my fidelity, too. It’s hard being in an abusive relationship as a man. Who would take your side? Who would even believe you?” says Okon Emmanuel (real name)

My friend was murdered by his wife. No one had any idea what was going on behind closed doors. I hope the Depp/Heard verdict inspires more men to feel comfortable telling family and friends about abuse they might be dealing with. Maybe we can avoid more tragedies in the future.

A study shows that men often store up the effects of the abuses they go through. This had led to harmful impacts on men’s health. The study revealed that men who have been victims of abuse are likely to experience physical and mental challenges such as anxiety, depression and suicidal thoughts. The study also shows that most of the men who have reported physical abuse had physical injuries such as bruises, cuts, scratches, broken bones, gunshots and stabs as on some part of their bodies. Also, the findings show that men, in the quest to suppress the emotional truama they are going through, have drifted towards external measures such as alcohol, smoking, drugs, etc.

Validation of abuse based on gender in today’s society is not ideal. When the issue of abuse is reported — be it from a man or woman — the same level of concern should be accorded to the issue, as well as the same degree of displeasure and punishment. If this is done more often, more abused men would be compelled to speak up.

John Augustina is a writer,  journalist, a singer who loves people and currently writes for Afrocritik.