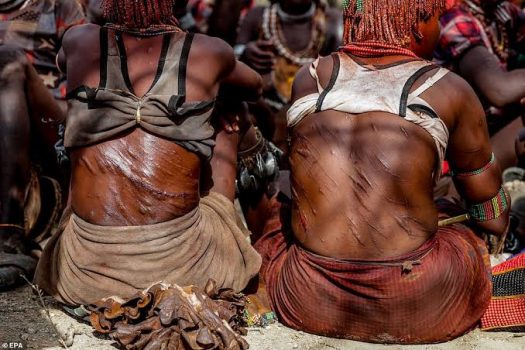 Cultural Baggage: Should African Women Prove their Worth Only Through Suffering?

Undoubtedly, the world is changing, and people are evolving. Yet, the fact remains that the level of fluidity needed in many cultures, especially as regards the subjugation of African women, has not been achieved…

In the Lower Omo Valley of southwestern Ethiopia resides eight indigenous tribes including the Hamar. Their members number in the hundreds of thousands. Each tribe has its own customs and, often, its own language. Since prehistoric times, the Lower Omo Valley has been an assemblage of cultures and ethnic groups. One of the most notable practice the Hamar people observe is the Ukuli bula which is the custom of jumping bulls.

The ceremony is a pivotal point in the life of the Hamar’s young men. It is believed that adulthood in men is conferred on them when they jump bulls. Any man that fails at his third attempt will not be recognised as mature, hence, will be denied marriage. During this initiation, another important activity is observed. Women who gather to witness this initiation are willingly scourged by the men till blood seeps out of the welts on their backs, in order to prove their eligibility for marriage.

These women go as far as begging and taunting the men to whip them, as scars are necessary proof of strength. It is believed that the elaborate scars demonstrate a woman’s capacity for love, gives them a say on who to marry, and the severity of scars show the man who loves her the most.

As a proof of commitment, mothers whose sons are being initiated are equally whipped until they shed blood. This show of commitment bounds the initiated men into future indebtedness to the women. Unsurprisingly, beatings are not just associated with the Ukuli Bula ceremony. The women are subject to perpetual beatings depending on the man’s discretion and pleasure. This prejudice dictates that the women have no right to question the authority of the men, and the men do not need to explain their reasons for scourging them. This treatment continues till after the woman gives birth to at least two children.

Despite this brutal abuse, women are still expected to be strong like the men by doing household chores, taking care of the children, planting crops, and as far as rearing cattle. The Hamar community has maintained a closed mind and have vehemently fought any form of changes that may tamper with their culture. This practice is, thus, still, carried out till date.

It is true that culture is critical to Africa. While some cultural practices are generally deemed enlightening and entertaining, others come with enormous sufferings. Every individual that is born into a particular society automatically becomes a member of that society and must associate with the general cultural practices — both entertaining and gory alike — of the said society. The fact still remains that, although men and women suffer hard treatments emanating from their culture, women suffer differently.

Over centuries, the concept of culture in Africa is misconstrued with a deep sense of traditional hierarchy which places the male above the female. Every historical epoch bears a signet of the enormous pain African women have had to go through to meet up with required standards; standards which were/are deeply rooted in the perception of male superiority and discrimination against them by turning a blind eye to the reality that these practices conflict with human rights. These impositions and the need to fit in keep the women in constant need to meet up with pre-existing standards by going through unimaginable hardship.

Undoubtedly, the world is changing, and people are evolving. Yet, the fact remains that the level of fluidity needed in many African cultures, especially as regards the subjugation of women, has not been achieved. There is always the case of a woman suffering from one form of abuse or another. Some have been taught to see these unfair treatment as part of their lives.

“You are the daughter of a woman whose husband broke her hands. Your grandmother’s legs were broken by her husband as well. You must be loved equally,” were the words told to 19-year-old Salimatu by her mother who believes that a woman needs to subject herself to beating as a proof of her love for her husband.

Data shows that some Ozubulu women of Anambra state in Nigeria perceive beating to be a “thing'” that marriage brings. They are constantly encouraged by family members after each complaint to endure this hostility as that is one of the things that comes with marriage.

This is the case of hundreds and thousands of women scattered in the different regions of Nigeria.

Gender-related forms of abuse rooted in different cultures vary greatly. Some of these abuses are impediments to not just achieving equality with men but to living as human beings who are safe and have the right to exist without external torment. Many men, too, had to marry women without their consent. Men are allowed to beat their wives for being disobedient, and can confine them to their homes, forbidding them to work for pay. These manifestations in all its form is likened to slavery and human violation.

The reality is that these injurious traditional practices to which women are subjected are wholly to the pleasure of male perpetrators. Women’s inferior status in the society is traceable to these acts which constrain women from living their full lives as human beings.

Every era in history has held its own standards of what is and is not accepted as beautiful. This era places a demand on a change in perspective in men and the entire society towards the cultural demands and expectations placed on women. The untold hardships which women of past decades have faced, and which some are still facing in this present age, is completely wrong.

Women should be allowed the right to love, to live and exist without striving to prove anything. Many women are not safe under specific cultural treatments. Some women have their bodies mutilated, and many die in the process of proving their love and commitment to men.

It has long been time for culture to smile on women and give them the room to live their full and best lives as well as exercise their human rights without being obligated to live and act in certain ways that confine them to the backdrop of liberty. The time is ripe for a liberating revolution that would enable women live comfortably in the society without placing painful expectations and duties on them.