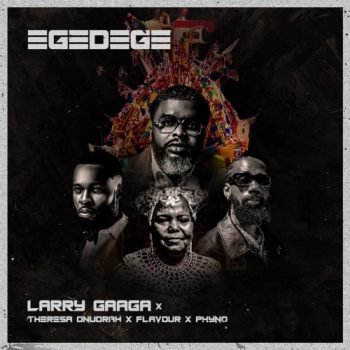 Egedege: Igbo Music is now a Rave in Pop Culture, and this Time, Millennials are Behind It

Egedege, has returned to the mainstream of Nigerian music, now as a new, contemporary genre…

Over the past week, two Igbo songs trended on YouTube at number one and two: “Levels” by the highlife singer, Flavour, and “Egedege” originally recorded by the veteran Igbo crooner, Theresa Onuorah, as remixed by her, Flavour, Phyno and Larry Gaaga. Both songs and their videos, released a week apart from each other, were, in a matter of few days of their respective release, sliding through the million views mark on YouTube.

For “Levels” which was released earlier, there was high praise for its excellent cinematography and attempt to infuse culture in its portrayal of vanity. But for “Egedege,” the praises were even more. The social media rave across Facebook and Twitter pointed towards a celebration of culture. Theresa Onuorah’s excellent melody which aroused nostalgia combined with Flavour’s more contemporary prowess to produce a sound that is sure to catch the attention of any lover of indigenous music. In between the mix of Theresa and Flavour, there was Phyno who delivered rap verses. However, his addition to the music faced heavy criticism from certain quarters because of his focus on partying with women in a song some have said is a spiritual affair.

Such bad choice to include Phyno into the Egedege song. He almost messed it up. So much irrelevant rap. He wasn’t needed there.

This however, served to strengthen the discussions, in the light of which, Egedege, has returned to the mainstream of Nigerian music, now as a new, contemporary genre.

For almost 40 years, Theresa Onuorah has sung from the muse which she gets from fellowshipping in water. Many prominent Igbo singers of the past century were of the agreement that a lot of what is great music comes from water. Even Oliver De Coque made music which went viral with the singular philosophy that great music comes from water. This is bordered on the belief itself that the water goddess, Eze Nwaanyi, herself is a great singer, and most of what constitutes worship to her was dancing and singing. The reintroduction of the Egedege music has brought on beautiful, indigenous music elements, and an aspect of indigenous spirituality that is most fascinating. In the past week on the Internet, the Egedege masquerade and the various aspects of spirituality deeply rooted in the worship of the water goddess have become more visible.

Chief among the achievements of the music is that many of its audience are of the younger generation. The cultural and sociopolitical renaissance going on among Igbo people all over the world is now in part championed by contemporary music. The events surrounding the connection to indigenous music, particularly Yoruba and Igbo music in Nigeria, is how it proves that music is one of the most potent weapons for keeping language and culture in active consciousness. This is because music brings out the poetry and melody in a language. The indigenous music of a people has a special power over them. I stated in my piece about the oja that, “the sound listened to by the previous generations of a lineage always has a spiritual connection with those who live in the present, because it comes like a melody travelling through a time machine.”

In the contemporary scene of Nigerian music, putting old genres in new sound to make good music is rife. This has enabled the growth of Afrobeats, Highlife, Juju, etc., in Nigerian music. What Theresa Onuorah has teamed up with Flavour, Phyno and Larry Gaaga to do is no different. Hence, the song rides on the wave of contemporary practice to introduce a brand of music which combines the bell, oja and hand drums to bring a new sound to the music scene.

Millennial singers like Flavour have experimented with the melody of the Igbo language and its ability to be mainstream in the contemporary space. Over a space of 15 years, Flavour has produced Highlife, Reggae, RnB and even Pop music in the Igbo language, and with each project, he has shown remarkable ability to evolve and adapt. Likewise, rappers like Nigga Raw, Phyno and Zoro have shown the creative prowess of the Igbo language to fit into rap music. These are in addition to what the amazing gospel Igbo singers like Patty Obasi, Luke Ezeji, Chinyere Udoma to mention a few, have done with the Igbo language. The feats achieved by these artists with the Igbo language is a testimony to the flexibility and creative powers of the language. The special art of bringing old sounds deeply rooted in culture to the contemporary scene on the mainstream creates a nostalgia and creates a connection between the past and present, producing music that the older and younger generation alike can enjoy.

Anyone who was around 15 years ago, when one of the great eras of the industry began and the sounds on the mainstream were mainly new, can relate to how the older generation scoffed at contemporary music because they could not relate to it in many cases. But current music, especially throughout Southern Nigeria, has achieved that harmony between lovers of music generation(s) apart. And even though depth in the music is still a few steps below the portrayal of vanity (which has its advantages), contemporary Igbo music manages to combine critical acclaim and commercial appeal.

The reintroduction of “Egedege” sets the boat rolling for more innovation of Igbo music in the industry. This is effective as a social and political tool. The Igbo language is experiencing a revolution rooted, not just in written words or political rhetoric, but also in the sound of music, deeply rooted in the spiritual consciousness of its people. It is realistic to hope that the destination of this renaissance will be profound, and that remarkable growth will become a certainty, because a culture once stretched to the limits by an idea never returns to its original size.

Michael Chiedoziem Chukwudera is a freelance writer and editor. He can be reached at Chukwuderamichael@gmail.com. You can also follow him on Twitter @ChukwuderaEdozi