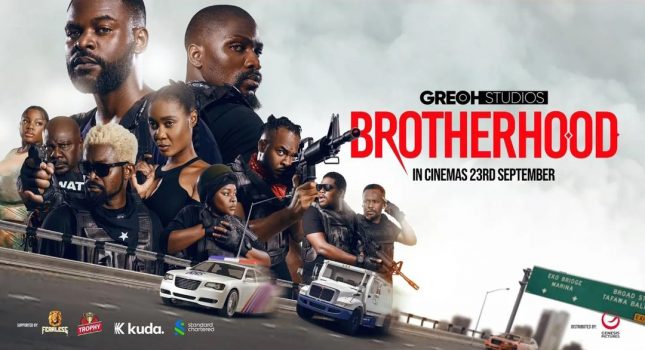 There is not a single thing about Brotherhood that’s truly original. But who cares? A film can be unoriginal and still be fun. And Brotherhood is madly fun. Besides, it’s so impeccably Nigerian in its delivery that it’s easy to ignore how cliché it is…

Jade Osiberu is great at delivering fun in the form of film. At this point, there’s no doubt about it. We saw it in her debut film, Isoken, the 2017 award-winning rom-com which she produced, wrote and directed. Then, we confirmed it with Sugar Rush, the 2019 Kayode Kasum crime action blockbuster which she produced and co-wrote. Another crime action blockbuster produced by Osiberu, Brotherhood is closer to the latter in terms of genre, but it’s way smarter, less chaotic, and honestly more satisfying.

Directed by Ugandan filmmaker, Loukman Ali (The Girl in the Yellow Jumper), Brotherhood follows twin brothers on opposite sides of the law, living with the very different choices they made as a result of their traumatising and difficult childhood as orphans. On one hand, Tobi Bakre stars as Akin, the twin who has spent more time in prison than he has out in the world. On the other, Folarin “Falz” Falana plays Wale, the twin who turns out to be a police officer. After an opening scene that shows the inadequately-directed child versions of Akin and Wale witness their parents’ murder, the film skips ahead to a couple of decades later. Wale has just been promoted to the SWAT team. Akin has just gotten out of prison for the fourth time or so. But neither brother seems to care in the least about the other. Wale is very content with keeping his twin a secret, and Akin would rather sleep in a house that has received advance notice of a robbery from the Ojuju Boys, an audacious armed robbery gang, than spend a night in his brother’s home.

Their damaged relationship promises to be the second highlight of the movie, the first being practically all the action scenes, but the film takes an individualistic path, instead. Wale and Akin go about their separate lives, the former a little bit obsessed with that audacious robbery gang and the latter running right back to the life of crime. Of course, Akin finds his way to the Ojuju Boys and becomes an essential member of the gang, with dire consequences for Wale who is already starting a family with the daughter (Dorathy Bachor) of a superior officer (Sam Dede), neither of whom is aware that he has a brother. That might sound like proper familial conflict brewing, but, pitifully, it never really comes to a head. 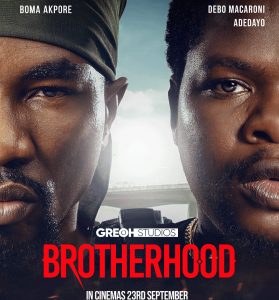 In fact, the screenplay, co-written by Osiberu and Abdul Tijani-Ahmed (Split, Divorce), keeps teasing explosive dramatic conflicts that it doesn’t deliver on. Akin and Wale’s relationship does not even get as much attention as Akin’s complicated friendship with Izra (O.C. Ukeje), the childhood friend who introduces him to the Ojuju Boys. There’s friction between Wale and a colleague (Jide Kene “Swanky JKA” Achufusi) that the film establishes but never seriously explores. Wale hurriedly starts a family that doesn’t raise the stakes any higher than they already are. Plus, the screenplay leaves parts of the plot and characterisation on the table. A volatile member of the Ojuju Boys disappears and winds up in police custody unbeknownst to the rest of the gang, but the team conveniently forgets about him, and, eventually, so does the film. And the callousness with which Shadow (Bright “Basketmouth” Okpocha), the leader of the Ojuju Boys, handles the deaths or disappearance of members of his gang just feels so off-character for someone who is lauded as the person who found and rescued every single one of them.

Instead, the film leans heavily into the heists and the action, because that’s what Brotherhood really cares about.There are a million action tropes and another million heist tropes, so much so that it almost feels like the filmmakers were ticking off items from a list. A window shatters into numerous flying pieces. A police car flips in slow motion. A vehicle is set ablaze. The toughest guys have battle scars to show for it. There’s a wild card who always goes rogue in the middle of dangerous operations. There’s also a decent dose of double-crossing. A heist takes place in broad daylight, complete with a very weird-sounding police officer declaring, “We have you surrounded!” The job that causes the most quarrels and gets nearly everyone killed is that one last job that’s supposed to help everyone get out of the business. And there’s that stupid person who has you screaming at the screen, “Don’t do it, don’t pick that gun!”

Between all the tropes and the ancient-of-days story of brothers on the opposite sides of the law, from Hollywood’s We Own the Night in 2007 and Blood Ties in 2013 to South Africa’s Amandla in early 2022 which had a similar “murdered parents” background story, there is not a single thing about Brotherhood that’s truly original. But who cares? A film can be unoriginal and still be fun. And Brotherhood is madly fun. Besides, it’s so impeccably Nigerian in its delivery that it’s easy to ignore how cliché it is. The language, locations and costumes — especially that masquerade mask — make the movie feel close to home. It doesn’t even care for the outlandish glamour that too many movies from New Nollywood prioritise, and that seems like something that director Loukman would have a huge contribution to. Before Brotherhood was released, Loukman amicably exited the project over creative differences, but his handiwork is still evident. In Brotherhood, we can see the same balance between minimalism and ambitiousness that was present in The Girl in the Yellow Jumper.

(Read also: “The Girl in the Yellow Jumper” Movie Review: Ugandan Thriller Thrives On A Story Of Improbabilities And Suspense)

However, the minimalism does not extend to the cast. Brotherhood is undeniably star-studded, featuring veterans, famous newcomers, musicians, heavy-weight comedians and an unprecedented number of Big Brother Nigeria alumni. I have to note, though, that I’d more comfortably group Bakre with the famous newcomers, especially since half of the film’s BBN cast are clearly only in the film for marketing purposes. At this stage of Bakre’s career, with the remarkable performances he has been rendering recently, including in this film, it feels unfair to group him with the rest of the BBN party. Bakre’s intentionality and fervour is clear in every scene in which he appears, and he’s only topped by Ronke Oshodi Oke who maneuvers maternal love, pain, obliviousness and savagery with breathtaking control as the brothers’ loving aunt. As for Falana, it feels like a breath of fresh air to see him sufficiently play the serious-minded brother who can still be interesting as opposed to the tiring slapstick roles that he’s so often been saddled with. I particularly enjoyed Ukeje as a handsome hothead, Okpocha as an understated kingpin, and Seyi Awolowo as a doomed jester. Achufusi, Toni Tones and Zubby Michael don’t have the most memorable roles, but they put in shifts that are good enough to make them stand out. And Bachor just might have a promising career in mushy romantic dramas. 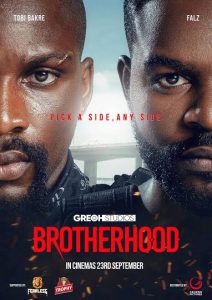 If nothing else, Brotherhood leaves the viewer with a new confidence in Nollywood’s action department and some excitement for what will come. It helps that the movie has a near-perfect score and an impressive camerawork. If the visual effects are not very solid, we can probably blame it — and that one shocking and out-of-place bank advert placed on the chyron on a TV news broadcast — on funding. Osiberu recently signed a three-year deal with Amazon Prime Video for the development of original TV series for the streaming platform, in addition to the platform picking up her much-anticipated feature, Gangs of Lagos, as an original. Hopefully, that comes with enough investment for even better projects. Regardless, she’s done a good job with Brotherhood. We hope she returns to the big screen sooner than later, but for now, she’s left us with a feast.

(Brotherhood is currently showing in cinemas.)