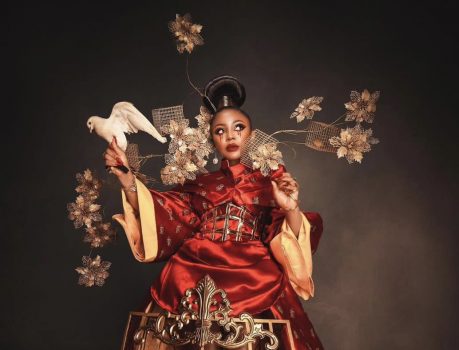 One of the most beautiful parts of the Nigerian entertainment industry is the celebrities’ ability to make an appearance. Asides from the intriguing premiere of Loukman Ali’s Brotherhood, we also have our eyes on the red carpet as celebrities turn heads with their costumes at the “Avant Garde Ojuju-” themed premiere. The word “ojuju” is a Nigerian term for “masquerade” and may have seemed difficult to pull off. However, this was not the case as these stars came prepared.

The concept of themed premieres may never go extinct as it merges the interests of movie enthusiasts and the Nollywood industry. Rather than a mundane appearance at a premiere, the idea of dressing to a theme not only interests celebrities but is also beneficial to the fashion industry. It is yet another opportunity beyond the regular annual events to showcase their style. In the Avant-Garde Ojuju theme, the concept gravitates to the cutting edge, bringing an innovative flair to the ojuju look.

The first themed premiere in Nigeria was held on December 10th, 2017. It was a premiere for Wedding Party 2: Destination Dubai, and was themed “Arabian Night.” Also themed was the premiere of Kemi Adetiba’s crime drama, King of Boys, with the theme “Gangster Royalty.” In attendance was the “Oba” herself, Sola Sobowale, in a magnificent green outfit by Angy Luminee Couture Ltd. (ceolumineeofficial). Sobowale’s gangster royalty costume gave her a fierce look like Griselda Blanco in Cocaine Godmother.

As time passed, the era of themed premieres became a fad in Nollywood, one that may not dwindle, seeing as celebrities are having the time of their lives playing dress-up. On Saturday, September 17th, 2022, Nollywood actors and others from the vast celebrity list turned up in the “Avant Garde Ojuju-” theme for the premiere of Brotherhood,  set to be released on September 23rd. Although many of them wore stunning outfits, they looked quite uncomfortable.

A video upload from one of the attendees showed the stress she faced making it to the venue. There was great  effort put into play to bring the theme to life. Given the theme, think of the premiere as a masquerade ball, or even an African Halloween. Many celebrity outfits gave a charming view, while others went full spooky. Here are ten costumes that got viewers reeling. 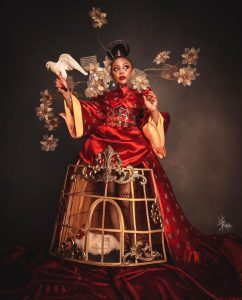 First, we congratulate Iheme Faith Uloma, popularly known as Ifu Ennada, on winning the cash prize of one million naira for being the best-dressed attendee at the “Avant Garde Ojuju-” themed premiere. The actress and skincare therapist rose to fame after participating as a housemate in season three of the Big Brother Naija reality show. Although her costume idea for the African Magic Viewers’ Choice Award (AMVCA) got opposition from fans, Ennada’s Ojuju Ball outfit was extra, but a good kind, I presume.

Ennada’s makeup, nails, high-hair-bun, and creative use of a cockerel and hummingbird are all she needed to stay on the avant-garde theme. Admittedly, having Toyin Lawani of Tiannah’s Empire as her stylist was a good choice, and may have been the leverage for her win as best dressed. Noting Lawani’s intense fashion sense and style and how she dares to go extreme and build on a theme, she is probably one of the few designers in Nigeria capable of pulling this off. 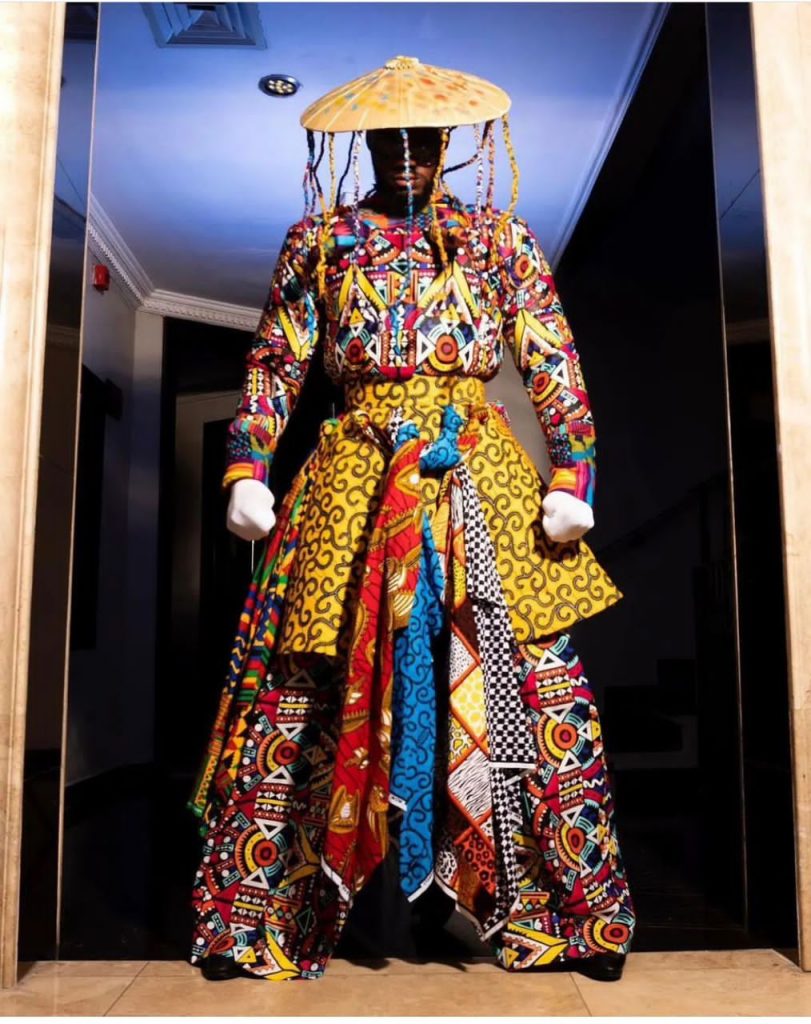 Bringing art and culture to life, Prince Nelson stormed the “Avant Garde Ojuju Ball” red carpet dressed as Ijele, a notorious masquerade from the southeastern part of Nigeria, known as the “King of Masquerades.” Although not in size, Nelson manages to mirror the pattern, costume, and style of Ijele, and more so, in a comfortable way. 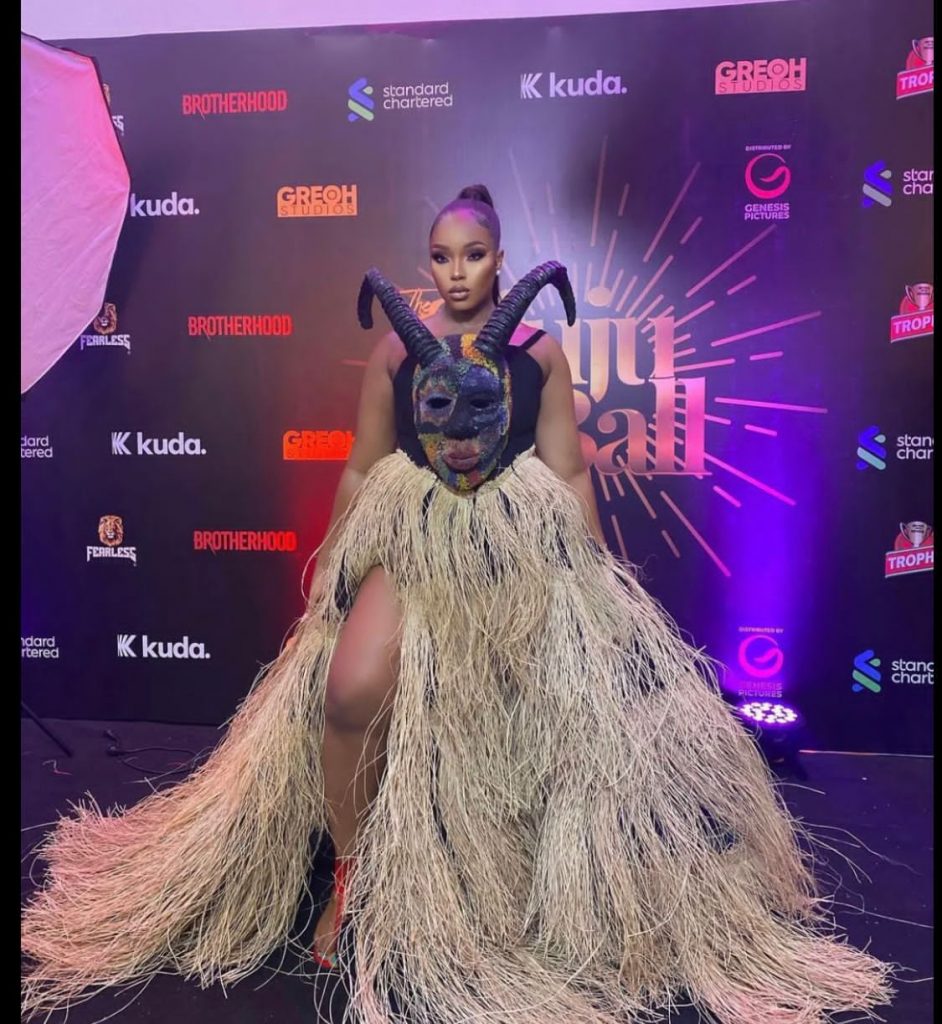 Talk about a charming masquerade. Bamike Olawunmi Adenibuyan, a.k.a. BamBam, Big Brother Naija season 3 ex-housemate, gave us a bit of both worlds. Generally speaking, masquerades are not synonymous with charm. They are the exact opposite. Well, this was our opinion until BamBam arrived at the event. Her costume, made with bamboo rafters and wooden masks, is a common factor for masquerades in Nigeria. 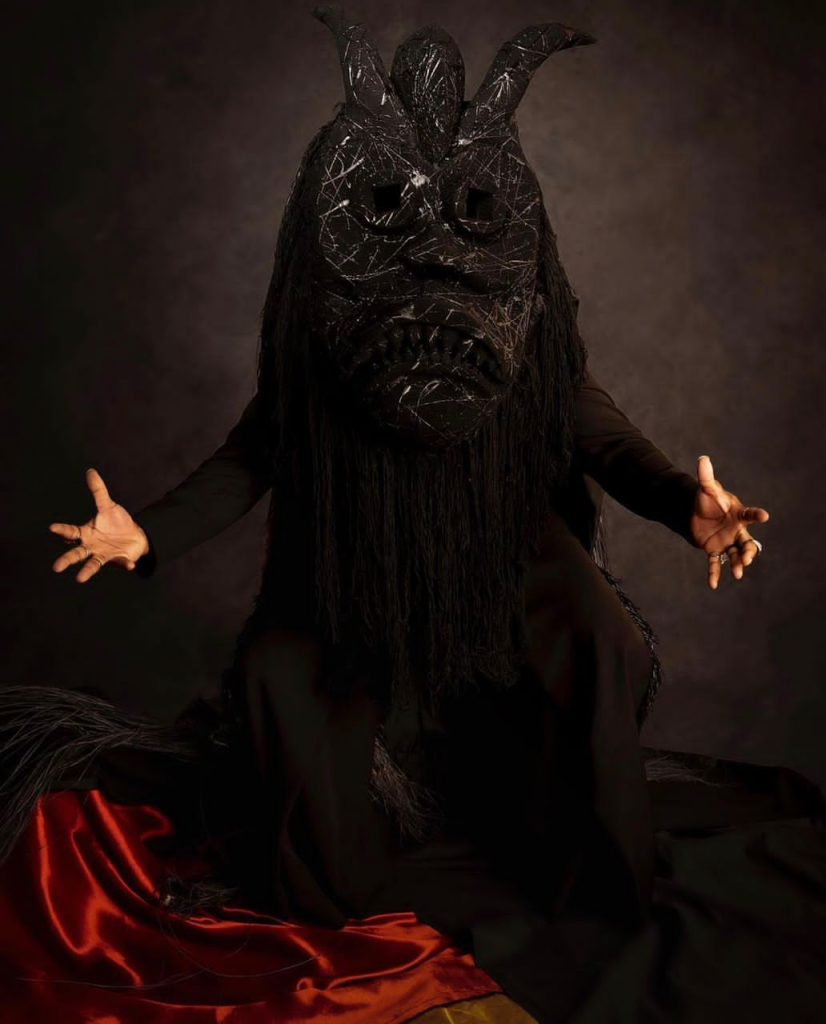 With his name already synonymous with controversy, Eze-Nwalie Nwogu, popularly known as “Pretty Mike of Lagos,” once again went all out to meet the theme. The socialite turned up in full Avant Garde Ojuju attire, comprising all-black bamboo rafters and a mask, a look with a strong resemblance to the Ajofia masquerade of Igboland. The Ajofia masquerade is one so widely feared for its strength and occasional appearance. Pretty Mike portrays avant-garde with the graffiti done on the cape of his outfit and meets the theme. 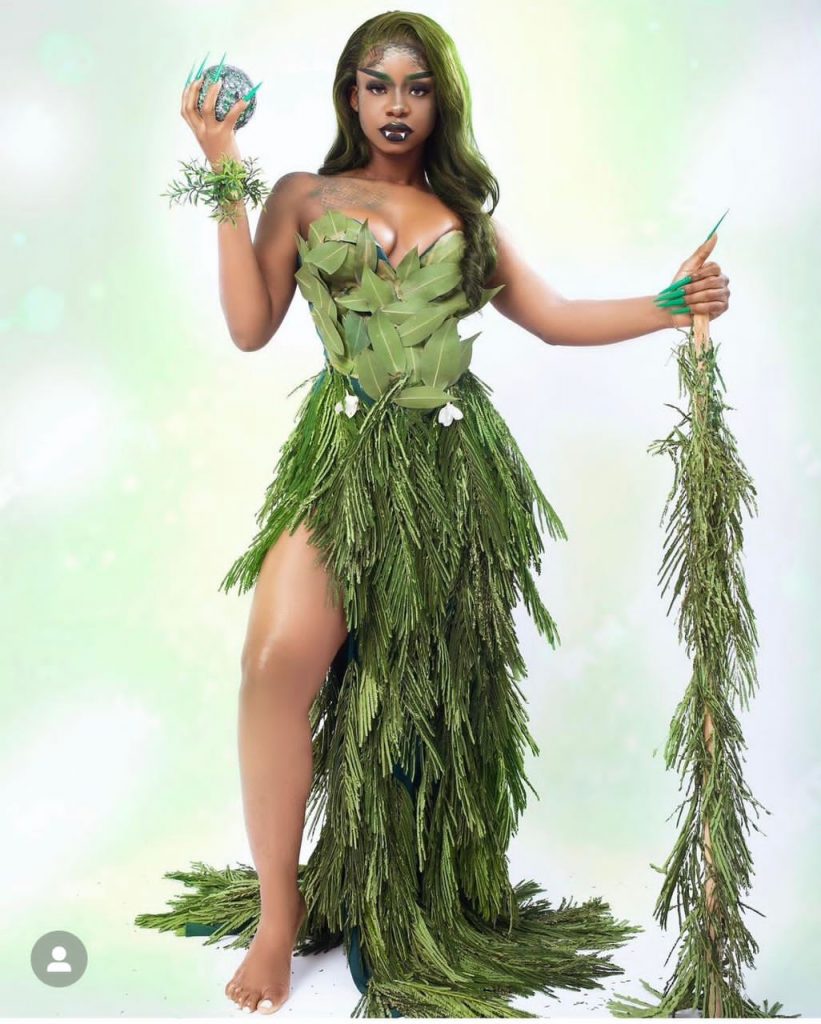 The details in Priscilla Ojo’s outfit are the most daring part of her outfit for the  “Avant Garde Ojuju-” themed premiere of the movie-  Brotherhood. Her dress reminds us of a forest spirit, not the altruistic kind. The all-green plant dress looks like something you would find on a tree deep in the jungle. It sweeps to the floor along with the staff she holds, but the elusive fangs sprouting from her mouth show that she would drink more blood than water to survive. She clenches a little marble in her hand, which could also represent the world and how she has it in the palm of her hand. She goes extra with her charming monster makeup, highlighted by her green contact lenses and scale skin art. Her costumier, Lasosa by Pam Pam, a custom dress designer, goes all out and successfully pulls off an original for Priscilla.

Nothing says Avant-garde Ojuju like a cage skirt. Hoop skirts have existed since the 19th century, but resurfaced in the 2019 Paris fashion week. Mercy Aigbe’s adoption of hoop skirts was similar to that of Ifu Ennada, but in her case, she flipped it. She wore a white and gold vintage ball gown, which can represent spiritual entities, but she switched it up by wearing the cage outside and a matching cage for her head, like an inside-out character.

Aigbe was a product of the infamous Tiannah’s Empire. The brilliant flip in styles, added to the assembling colours, is a perfect style to showcase Aigbe’s elegance and physical attributes. Lawani goes extra to make the outfit transformable, ensuring flexibility and comfort for the star. 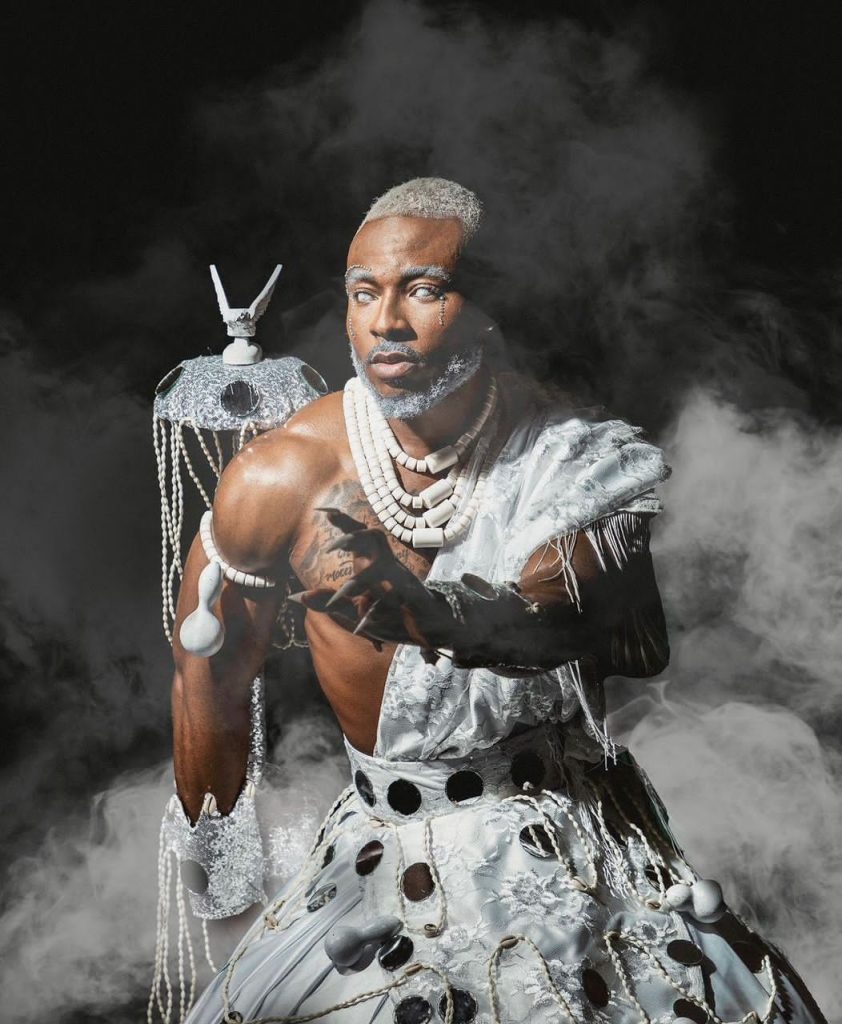 The first thing that hits you when you see Tijani is that he is wholly bedecked in white—even his beard is dyed white. The second thing is that he fixed artificial nails, which look more like talons than nails. He sports a white crown, beads, and gown, and holds a bird in one hand and a staff in the other. His outfit has small white gourds reminiscent of traditional voodoo charms attached around the waist, which ties in with the concept of a priest-king.

Plus, Alexander wore a design by Osemwengie Dennis Odion, who was a winner of the prize for fashion at the 2019 Future Awards. The design, inspired by traditional Yoruba culture, is relatable to the designer’s earlier works, as he likes to experiment with culture in his pieces. 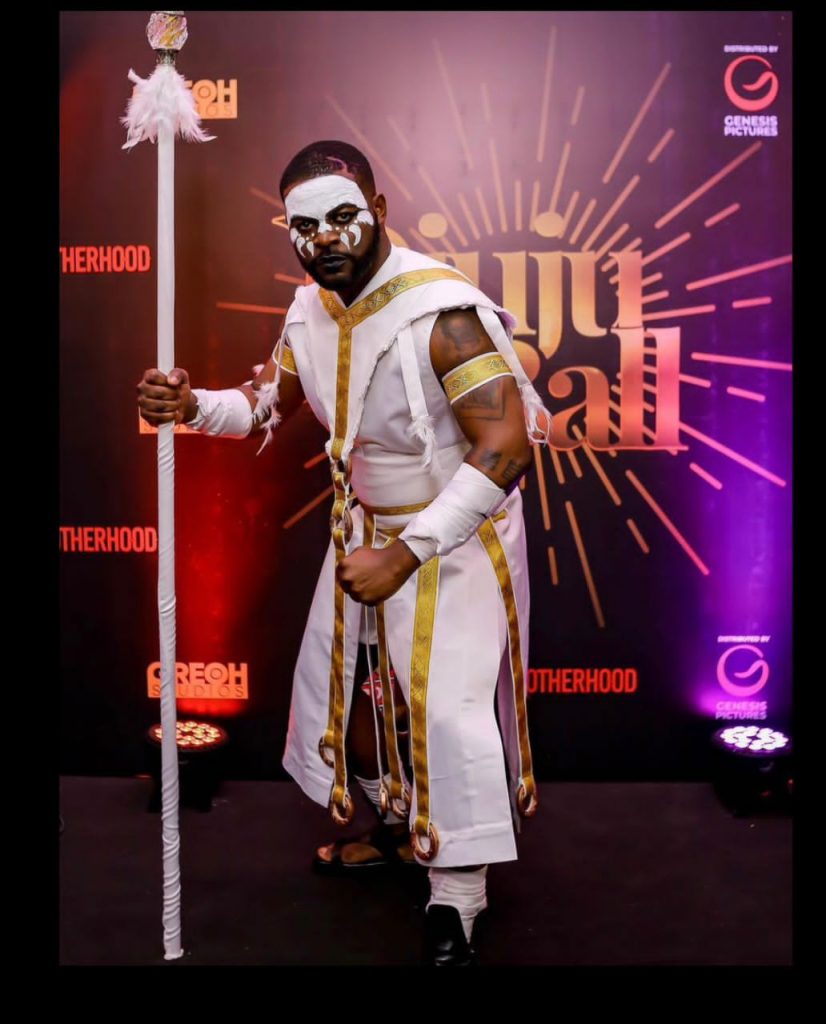 Celebrity artiste, Folarin Falana, a.k.a. FalztheBahdGuy, has had a trend for his song “gentleman” going on for months on his Instagram Page. However, Falana’s outfit for the premiere is far from gentle. As a co-lead cast member from the movie, Falz stormed the Avant Garde Ojuju red carpet dressed like a warrior priest, in a white and gold costume and holding a spear, showcasing aggression. He also sported face paint and black lipstick, further enhancing the priest’s image as someone who communed with spiritual entities and at the same time wielded strange powers. Falz wore a design by Michael Odyssey, an applaudable effort seeing as the piece of art is clearly out of Odyssey’s niche (proved by a skim through his Instagram page). 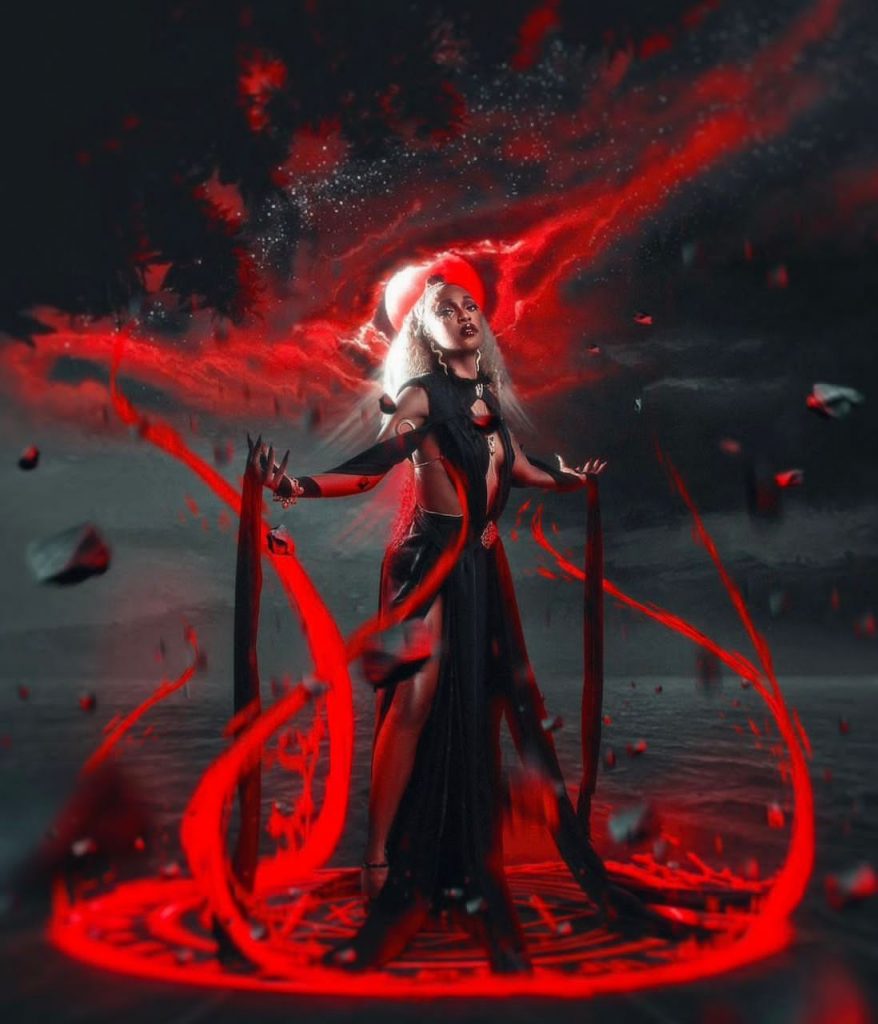 Nollywood Sweetheart, Efe Irele, wore a sultry, all-black dress by Emovon Anniet, marking Irele’s place as a denizen of the night. . The upper part of the dress had a few strips of clothing, leaving the majority of her torso bare. Also adding to the dark allure and mysticism she portrays, almost like a succubus coming for your soul. Her alluring look on the red carpet shares a similarity to her character as a FanOnly model in Adia Uyoyou’s Hey You!. The black and gold sceptre alongside the gold jewellery she wore further enhanced the image of a regal night-skin, and the diabolical cherry on top was the black tears falling from her eyes, which pull you in and spit you out. Over all, her look is very “Avant Garde Ojuju” – if you ask. 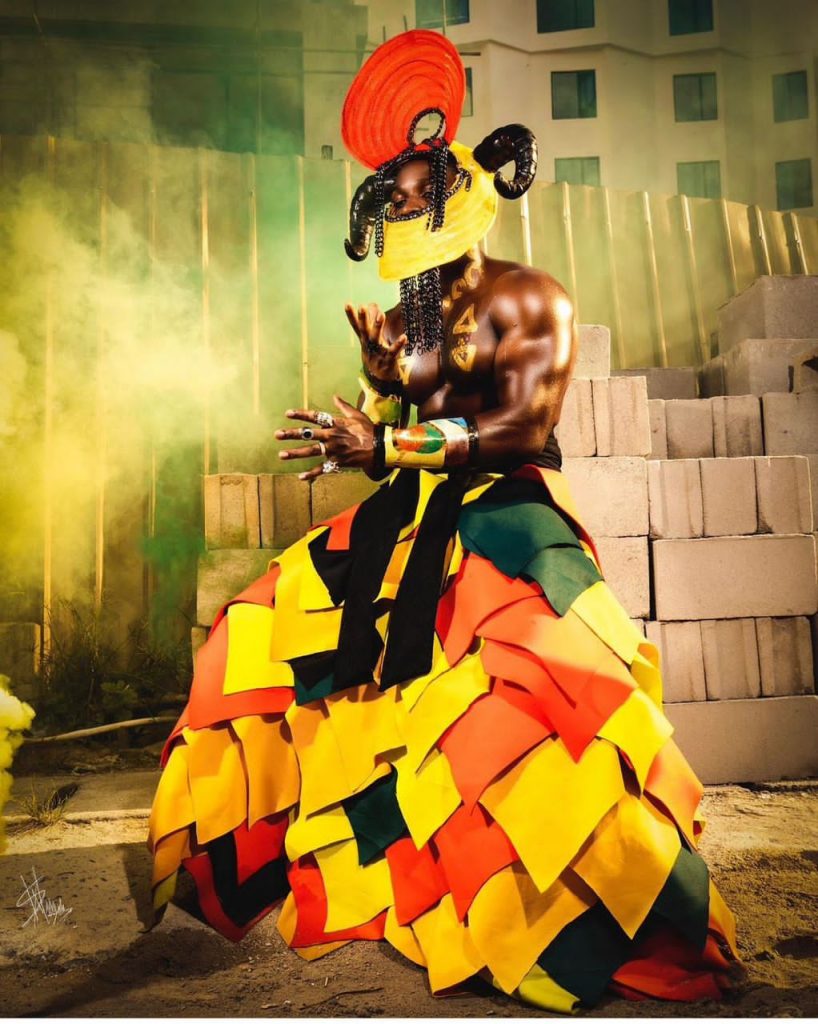 If points had been awarded for how accurately one portrayed a masquerade at this event, Tobi Bakre would have scored very high. From the skirt made in multicoloured strips of clothing, layered on top of one another, to the goat horns and head wrap mask, and even to the armbands and rings, his outfit screams masquerade and attention.  His torso is left bare, showcasing his physique and further emphasising the masquerade look, but with a twist that follows the theme of the event – “Avant Garde Ojuju-”.

My first opinion of the Avant Garde Ojuju Ball was one of doubt. I couldn’t imagine how this theme would be pulled off, but the event’s apparent success shows the growth and evolution in style and skill of both the celebrities and their designers. Most of the outfits are custom-made and mirror the cultural diversity and unity in Nigeria. Although not everyone took to the theme, the red carpet was fun to watch and hopefully, the prefix to many others.