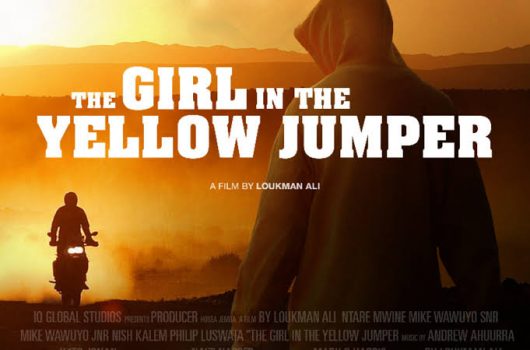 The Girl in the Yellow Jumper Movie Review: Ugandan Thriller Thrives on a Story of Improbabilities and Suspense

In “The Girl in the Yellow Jumper”, Ali successfully triggers in viewers the eagerness to discover the truth, to discern between what is real and what is merely presented as real…

African countries are not known for good cinema. African filmmakers have to contend with a lack of funding and a non-existent structural framework for filmmaking. And although certain African films with access to deep pockets (like the recent Nigerian EbonyLife and Netflix film Chief Daddy 2) have shown that the problem with filmmaking in Africa is beyond the lack of resources, from time to time, a film is released in one African country or the other that towers above the surrounding difficulties, and proves that so much more could be done with better resources. Unfortunately, many of these movies do not have access to an international audience, so they fly under the radar.

The Girl in the Yellow Jumper is one of such films. Shot in 2018, the Ugandan mystery and crime thriller film is the first feature film by director, writer and producer Loukman Ali. According to Ali,  the cast and crew struggled with severe lack of funds throughout filming, often putting the film on hold, and the actors sometimes going without food.

Additionally, its initial release in 2020 was put off when theatres closed down in response to the COVID-19 pandemic. However, the film screened at the 2021 Nollywood Week Film Festival, and the 2021 Realtime International Film Festival (both of which held in Nigeria), with Ali winning Best Director in the latter. In December 2021, it was released on Netflix as the first Ugandan film on the global distribution platform.

Apparently based on true events, the film opens with a crime journalist (River Dan Rugahu) discussing a serial killer on his TV show with a neuroscientist (Philp Luswata). The media has tagged this killer “The Cigarette-Butt Killer” because he leaves a cigarette filter at his crime scenes. Interestingly, the killer always leaves one witness unharmed. Nobody knows his motives or how his victims are connected. And to help answer the question “why?,” the neuroscientist narrates the old parable of the scorpion and the frog.

Supposedly watching the TV show is Jim (Michael Wawuyo Jr)), a supposed cartoonist who has fallen asleep in his living room. There, he is abducted by a girl in a yellow jumper (Rahema Nanfuka). Somehow, he escapes from where he is kept hostage and, as he heads to the city, hitches a ride with Patrick (Maurice Kirya), a policeman driving to the city. Cuffed in the backseat of Patrick’s car is an elderly man (Michael Wawuyo Snr) who happens to be one of the witnesses of the Cigarette-Butt Killer. When Patrick asks Jim how the latter sustained his injuries, Jim has an unbelievable story to tell.

The film, very cognisant of its own improbability, places a reminder onscreen, “Remember, this is still a true story!” But it is this improbability that gives it its sense of mystery and fuels its suspense, together with its ominous scores perfectly timed to stoke tension.

Throughout the film, there is the constant feeling that something is off, whether it is with Jim and his supposedly true but impossible story (because why would anyone tell an unbelievable lie if he wants to be believed?) or with the witness in the back of the car (because why is a harmless old witness cuffed at the back like a criminal?) Ali successfully triggers in viewers the eagerness to discover the truth, to discern between what is real and what is merely presented as real. And there is also the constant wonder about motive and connections.

But the improbabilities sometimes go too far such that they cannot be considered as a deliberate storytelling technique. The most unjustifiable is in policeman Patrick’s portrayal. Patrick and Jim have never met before. So when he picks Jim up, Patrick makes so much fuss about caution that he finds himself recounting a childhood horror story about good deeds getting punished.

He asks Jim to pull up his shirt and turn around to be sure the latter has no weapons under his shirt, but when Jim only pulls up his jumper, leaving the shirt tucked in, Patrick is not bothered by it. Then, he makes Jim sit in front but puts his bag at the back so that the latter cannot have easy access to the bag if there are weapons in it. But he does not mind that the bag is kept close to the witness.

Patrick easily believes Jim’s strange tale, even after admitting that things like that don’t happen in Uganda. He comfortably recites his phone’s password to the hearing of the two strangers sitting in his car, and during the journey, he even makes a few stops that involve him stepping out and leaving them alone in a car that has his official weapon. Yes, Patrick’s questionable actions help in fuelling the suspense since an overthinking mind might worry about the many ways things can go wrong.

But, it is undeniably destructive to portray a character in such an inconsistent manner, even more so when the character is, as Patrick is, the one stable character in the midst of characters who are not what they appear to be.

Something must be said about the film’s vivid storytelling, held up by the deliberate shots, unexpected explainer clips, and seamless flashbacks. So well does this film understand the basic rule of showing a story as opposed to merely telling it that it relies on illustrations (some of which feature Hollywood’s Morocco Omari who co-produces the film), including the occasional animated clips, to pass across several bits of information and new knowledge — an approach that is somewhat fresh, albeit overcooked, with respect to the genre. And even when it merely recites a story, as it does the scorpion and frog parable, it paints such a clear picture that has you drawing up illustrations in your own head.

Furthermore, details are so specifically captured as the events of the film play out, with clues hidden in plain sight. But even if you somehow take a lucky guess, you cannot be sure how they fit together without continuing to follow the story till the very end. This is one of those films where everything means something and things are not being thrown in just for the sake of it. You must pay attention. But that shouldn’t be difficult. From the title to the mid-credits scene, The Girl in the Yellow Jumper holds your attention.

However, when the time comes to unravel the film’s mysteries, it directs all its attention at the clues it suspects you might have missed, unwrapping those aspects neatly in order to deliver an “aha!” moment, which it executes very nicely. At least, now, we know everybody’s motives and understand some of those coincidences.

But, in the process, the film forgets to tie up loose ends that might not have been preceded by clues. And in its final moments, it creates a little extra confusion in how the events of its final crime scene plays out, all for a grand reveal that was somewhat predictable but interesting all the same. This flaw, in addition to the considerable laxity in acting, gives it an imperfect finish.

Nonetheless, The Girl in the Yellow Jumper is an ambitious film and a worthy watch. And it is not called a mystery-thriller just for the sake of fitting it into a genre. It actually does thrill.

netflix The Girl in the Yellow Jumper Ugandan cinema