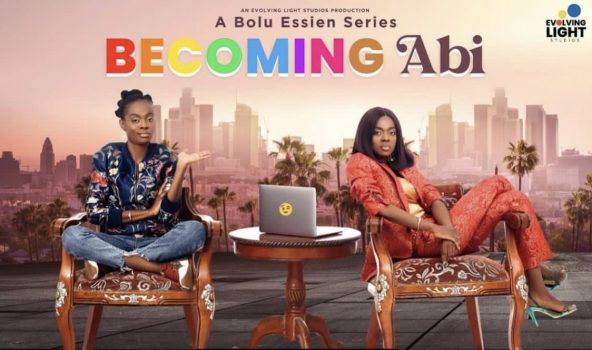 Becoming Abi leans a bit towards the same structure as Chinaza Onuzo’s 2020 drama, Who’s the Boss?, but it does better…

We all have our dream of what our life should be like, maybe not airing on Netflix, but available on the pages of our hearts. Becoming Abi, as the name implies, takes us through the exciting transformation and growth stages of the protagonist, Abi. The Bolu Essien movie is a Nigerian blend of the 1988 Working Girls movie, with a sprinkle of Seth Gordon’s Horrible Bosses as a subplot.

The six-episode series encompasses love, hate, envy, and competition in the workplace. However, in the bid to make Abi shine, the light of her colleagues had to be dimmed. Essien plays the protagonist. Her technique and the mode through which she brings the character, “Abi,” to life shows she tailored the role of Abiodun Adeola specifically to herself. She understands the story and pacing in the script; hence her theatrical delivery of the character is an applaudable one. Sometimes, writing scripts yourself is one of the best ways to become the best screen actor in a production, but it can also be the reverse.

The writer-actor concept has been in existence for decades now. However, the downside of this concept is that the perfectionist and egoistic writers or actors believe they are too skilled to be neither corrected nor directed. Essien’s skill and professionalism are seen in her ability to inter-perform — as a writer, director, executive producer and lead actor.

(Read Also: Eyimofe Review: An Ever Relevant Interrogation of the Pressing Reasons to “Japa”)

Becoming Abi revolves around Abi’s flawed life, family trauma (which develops in later scenes), her love life (filled with confusing emotions and indecision), and her workplace drama (which starts up well and takes a toll on her). Abi is excited to have been considered for a position and invited for an interview. With her level of excitement, one can only imagine her reaction to an offer letter.

Becoming Abi is an exciting work of art, and it does well to establish that in the first episode. From the first act on screen, your interest is captured by Abi’s awful, yet intriguing experience as a rookie. Also, the playbacks, the interesting back and forths with her conscience in a body, as well as her acted-out thoughts, are brilliantly crafted by the post-production team. The production rolls out a heart-warming, relatable story of Abi and the nature of her relationship with the people around her. Abi is hired by Creative Lens Group, an advertising agency owned by Ifeanyi Kalu (Long Walk to Truth) as the MD, and his wife, Grace. Unfortunately, she has to work under the hawky and domineering eyes of her insecure boss, Bimbo, who feels threatened when Abi does a good job. Thankfully, it is not long before we meet Grace, a breath of fresh air, literally. 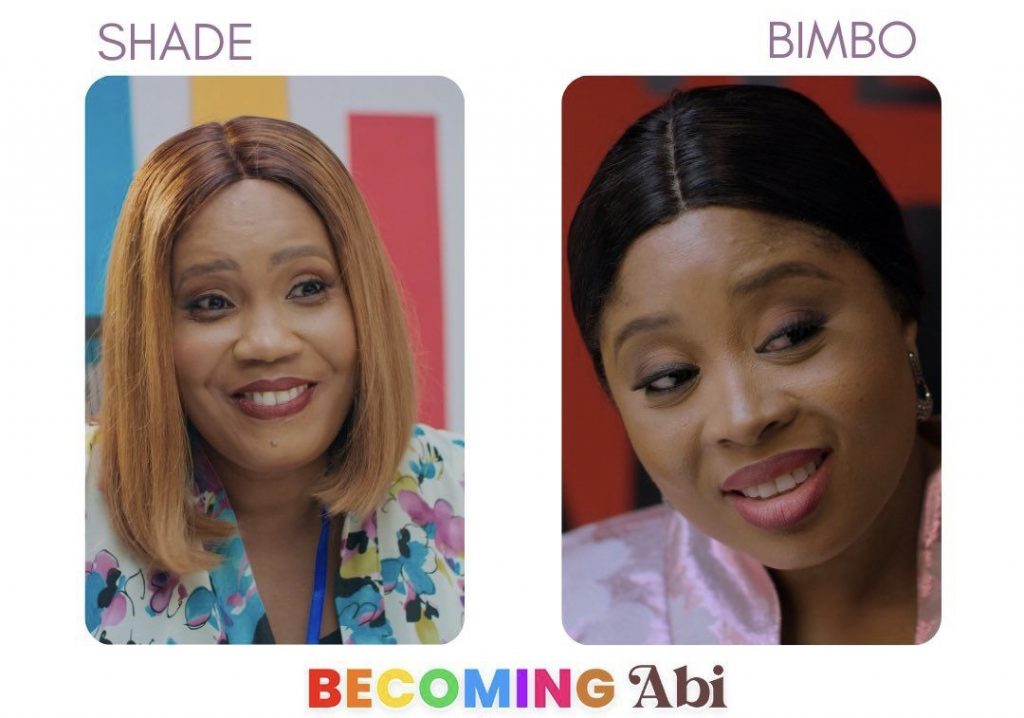 When the character of Grace is introduced, you can see her for everything her character is scripted to be. She brings warmth and a positive aura when she walks into a room. Her friendship with the staff has them excited like children in a candy store. She gives Abi her first opportunity to secure a client and soon becomes a role model to her and a support system as she rises up the corporate ladder. Abi meets Joyce, and they become office besties. Their friendship shines a light on the importance of friendship, and how having an office best friend can get you through the tribulations and stress of the Lagos advertising industry.

Becoming Abi leans a bit towards the same structure as Chinaza Onuzo’s 2020 drama, Who’s the Boss?, but it does better. It chooses its setting and sticks with it. The office is made the first point of meeting for all the cast members, and goes further to let us see the office space differently. Creative Lens is not merely a workspace but a common participant in moulding the fate of the cast, and a place where dreams are actualised and bonds are built.

From the first episode of the series, all the elements that will move the movie forward are spotlighted. We get a glimpse at what Abi’s life will later become, but nothing prepares you for what the fate of her friendship with Joyce holds. The film takes on an imperfect but consistent pacing in its production. However, no suspense is built because of the third person narration done most of the time. Midway in, the movie switches its focus on the love triangle between Israel, Abi and Daniel. The men in Abi’s life are the core pillars of her fame. With the script leaning towards showing the emotions and chemistry between Abi and Daniel, it is almost impossible to guess that she does not fall for Daniel’s fancy and alluring personality.

Daniel embodies the position of marketing manager of a Nigerian brand. For a character with such prolific detail, Nnani gives an outstanding interpretation of the role. Daniel is sapiosexual and desirable to the ladies. However, the beauty of his character is that he is emotionally intelligent enough to know he deserves to receive as much love as he gives. Also, he is expressive about his feelings and composes himself well enough. Israel is a relentless and persistent lover. He is secure, and as much as he loves Abi, he understands all he is worth and never questions his adequacy in the relationship. More importantly, I admire how the writer ensures that both men never cross paths, just yet.

It is certainly helpful that the series does not try to take on a cast larger than it can handle, and also manages to cast just the perfect people for the roles. The cast members are the rock that propels this series forth. They are calm and relatable, and they give no forced impressions or expressions. The feature of Biodun Stephen as Shade is brilliant, not just for her audience, but for the character embodiment. Shade is the new boss. She knows just how to command the respect she desires, but unlike Bimbo, she is a teacher and is quite success driven. Unfortunately, Stephen is away from the screen most of the time, and excuses are made to fix that loophole.

Also, her character, Shade, seems to have an emotional imbalance. It is impossible to predict her next feeling. She tries to be mean, nice, sneaky and caring all at once. Again, the MD (Kalu) and Grace (Opeyemi Akintunde) play the role of some kind of super couple. Seeing the acting from Kalu in later scenes, you realise he held back a lot of stellar performances in the early scenes.

(Read Also: Valley of a Thousand Hills Review: An Unclear Solicitation for the Queer Community)

It will be remiss not to commend the costumes, cinematography, location, and entire aesthetics employed in this production. The minimal use of location in the production goes a long way in structuring the series. Still, the near-perfect production does not entirely hide the flaws. Abi’s rise on the corporate ladder is a little surreal. It happens swiftly and sells the ideology that promotions are handed out like candy in the corporate world. There is also the illusion  that every other character in the office is stuck just where Abi met them. The movie focuses so much on the growth of Abi that it forgets that growth is relative. 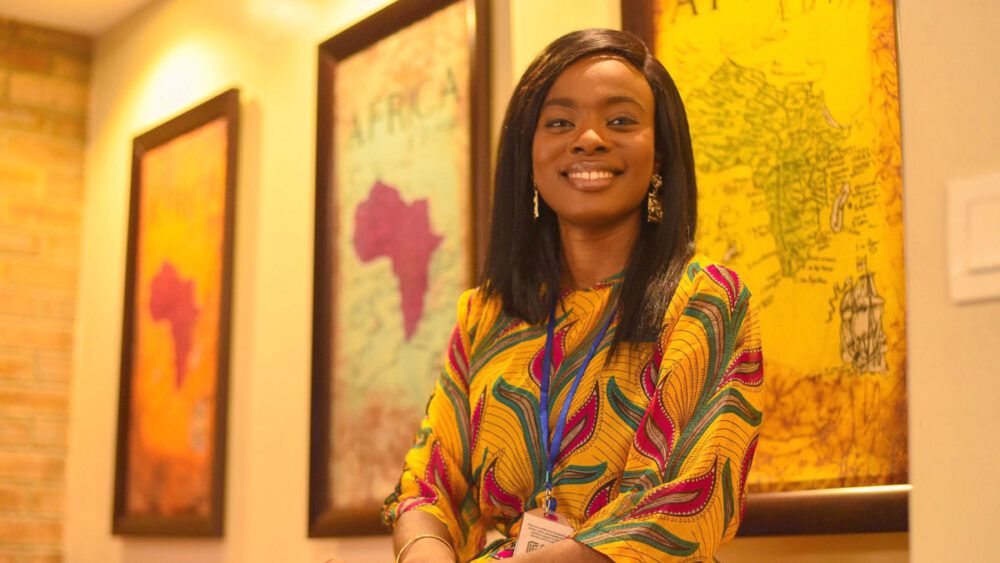 Still, most of the details from the series will not be easily forgotten. Becoming Abi will be remembered for its hilarious moments, like that of the talkative graphic designer who has bad breath and is avoided by colleagues, and for the amusing sense of humour in the interactions between Abi and her conscience. Aside from its few flaws, the series is a people pleaser. Especially for its setting and style. It is one of the few good works I have seen this year, and if you are a movie enthusiast like me, this is a definite addition to the “watch list.”

Blessing Chinwendu Nwankwo, a film critic, beautician, and accountant, currently writes from Lagos State, Nigeria. Feel free to drop your opinion in the comment section below and connect with her on Twitter at @Glowup_by_Bee and Instagram at @blackgirl_bee.