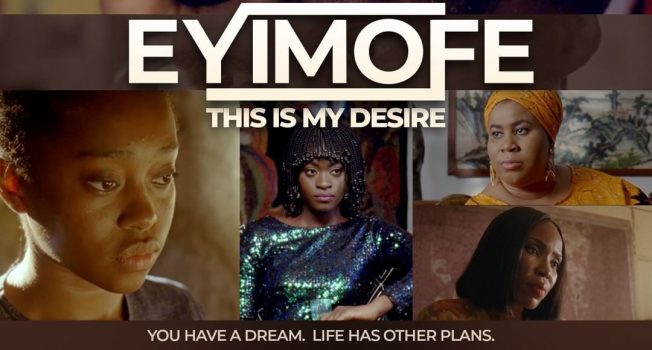 “Eyimofe” Review: An Ever-Relevant Interrogation of the Pressing Reasons to “Japa”

In Eyimofe, their riveting feature, the Esiri brothers capture the desire to escape a system that seems to offer nothing, but readily takes away everything instead …

If there was ever a review that came late, it’s this one where I attempt to dissect Eyimofe (This is My Desire), the Chuko and Arie Esiri directorial debut feature that ruled at the global festival circuit in 2020 and went on to win multiple awards at the Africa Movie Academy Awards. A review of Eyimofe coming in towards the end of 2022 feels like a punishable delay. But with its recent arrival on HBO Max, we have a chance to see the immigration-themed film again, especially in light of the current Nigerian situation that is even worse than it was at the time when the film was made.

Eyimofe tells the stories of Mofe (Jude Akwudike) and Rosa (newcomer Temi Ami-Williams), two struggling Nigerians living in a busy, lower-class neighbourhood in Lagos and wanting nothing more than to emigrate to Europe, the former to Spain and the latter to Italy. We never see either of these countries, though, with the film wholly set in Nigeria and majorly in Lagos. Perhaps for a closer view and tighter narrative, the Esiri brothers divide the feature into three parts. The first part is dedicated to Mofe and titled Spain; the second follows Rosa and is titled Italy; the last is a short epilogue that restricts itself to Mofe. The only relationship between the two leads is that they live in the same neighbourhood, have the same landlord (played by Toyin Oshinaike) and sometimes happen to be in the same place at the same time. But their story is the same, even with the stark differences.

Mofe is a factory engineer by day and a security guard by night; Rosa is a hairdresser by day and a waitress/bartender by night. Mofe lives with his sister (Uzamere Omoye) and her two sons in a cramped-up flat and helps pick the bills; Rosa lives with and is responsible for her younger sister (Cynthia Ebijie) who’s pregnant. Mofe’s employers might believe that “The best safety tool is a safe worker” and might have failed to provide a safe working condition, but, at least, he’s able to come up with some money — albeit with great difficulty — for the fake passport with a foreign name that he’ll need for his relocation. As for Rosa, she might not be able to buy a phone for herself or for her sister, but she’s somehow able to buy her sister’s drugs and provide the things required by the woman (Chioma “Chigul” Omeruah) who is supposed to help smuggle them out of the country. Mofe and Rosa aren’t exactly starving or dying of a sickness that they can’t afford to treat, so some might say that they don’t have it all that bad. And yet, it’s bad enough that they want out, that they’ll do anything they have to if it’ll get them out. It’s heart-breaking and unfortunate and still too familiar a feeling for the many, many Nigerians holding on to what we’ve come to know as the Nigerian Dream.

(Read also: Movies from the Vault: Chineze Anyaene’s “Ijé: The Journey” is a Compelling Take on the Nigerian Dream)

In fact, if someone tells you that the cameras that filmed Eyimofe were merely capturing a section of real-life Lagosians going about their daily lives, you would believe it. It’s very likely (and the distance between the camera and the people in some scenes point to the likelihood) that the neighbours and the market crowds are very real, non-acting people. But the actors, too, feel like real, regular people. It’s all so alive and genuine that it’s hard to imagine that anything onscreen is staged. There’s no fanfare, no contrivance, no exaggeration, and no sympathy-digging. It’s honestly not even poverty porn. Just people who are somehow optimistic and content while managing to live lives that they clearly deserve better than. It’s so understated that at first glance, despite all the hazards that litter the characters’ environments, you might not even see how uninhabitable their lives are.

But upon a closer look, you see it so clearly, that pile of tiny frustrations that make up the daily lives of Nigerians. Nigeria happening to you in the most unthinkable ways. That failed system that you cannot escape as long as you remain in the country. And even worse, that failed system that’s hellbent on keeping you in the country. In Eyimofe, you’ll hear “E shock you?” said in the most literal way. And it’ll feel so normal, so expected, and still so shocking to see that a thing like the event which results in that expression can be allowed to happen, and more than once. The film might be about the desperation to japa, but the characters’ efforts at immigration hover in the background like a shadow. What we mostly see in the foreground, instead, is an interrogation of the reasons — the kind of living conditions that fuel that desperation. As the subtitle hints, Eyimofe, a Yoruba-sounding Itsekiri name, translates to “this is my desire.” In Eyimofe, their riveting feature, the Esiri brothers capture the desire to escape a system that seems to offer nothing but readily takes away everything instead. And their strong-performing leads absolutely drive all the points home.

(Read also: Blackstar Film Festival: “We Wanted to Tell a Story About Nigeria” – Arie and Chuko Esiri, Directors Of “Eyimofe”)

This is Akwudike’s first leading role in a feature film. It appears to also be his first time playing a Nigerian in Nigeria. A first-time viewer of Eyimofe may remember him for his recurring role in Gangs of London, a British TV series where he stars as the father of Elliot Finch, played by another British-Nigerian actor, Sope Dirisu. It’s simply brilliant how Akwudike carries the role of the reserved, long-suffering Mofe, balancing despondency and resolve on extremely calm shoulders. It’s through him that we really see and feel the frustrations that push the film’s characters. And when Mofe finally snaps, Akwudike does not forget to retain the calm personality that he has imbued his character with, a calmness that convinces you that Mofe’s reaction is perfectly reasonable, maybe even too generous.

Ami-Williams handles the livelier parts of the film, and that’s both a function of Rosa’s character — as opposed to Mofe’s reticent persona — and the far more joyous, albeit doomed, path that Rosa’s own life takes. While Mofe struggles with the aftermath of a devastating loss — multiple losses would be more accurate, even — Rosa gets to live a slightly more entertaining life. A Lebanese-American man (Jacob Alexander) takes a liking to her, and thanks to him, we get to see the better parts of Lagos, in staggering contrast with the slum-ish neighbourhood that she and Mofe call home. Yes, she works two jobs and also walks around markets trying to sell perfume, body spray and powder. But, to an extent, Rosa has it easier than Mofe, what with the white man helping to pick her bills even if he (and the viewers) can never really tell whether she truly likes him or is just using him. And yet, she and her sister face a unique disadvantage. Her magnanimous landlord’s help is predicated on her having a romantic relationship with him, a condition that doesn’t apply to the kindness he directs at Mofe. Her teenage sister gets sexually harassed on the street, just a stone throw from their home. That same sister’s pregnancy, though not expressly explained, is implied to not be a result of a lawful sexual intercourse. And the only way the sisters can get to their dreamland is if, among other painful things, they surrender themselves to sex trafficking.

It’s particularly insightful that Mofe and Rosa are already trying to leave the country before they encounter the misfortunes that will finally break them. It’s thought-provoking how their desire to leave is inspired not by the big, traumatic occurrences, but by the sheer dispiritedness that’s present from the very start of their stories. There’s not even a moment of revelation where Mofe or Rosa explains why they want to go to Spain or Italy. It’s not as if they have any plans for their lives in their desired locations or know what to expect if they get there. Yet, it’s a phenomenon that’s all too common, with a scary number of Nigerians trying their hands at whatever country will take them, by hook or by crook.

Reminiscent of Mati Diop’s excellent debut work with Atlantics, there’s a quietness in Eyimofe’s style and pacing and in the way the narrative unfolds, even as it unfolds surrounded by all the noise and bustling of Lagos. There’s a distinct focus in the way the scenes are captured, such that even the smallest details stay with you. When Mofe passes the alley into his building, you remember the much earlier scene where he fixes a generator with his nephew in that same alley. You find yourself feeling sad all over again about the events that follow that repair, and you wonder if there was ever a chance for things to turn out differently.

It’s especially interesting how the film’s characters accept their situations but still forge ahead. Their hopes wither and their disillusionment grows even deeper without them ever truly giving up. It’s a testament to that broken yet enduring spirit of the average Nigerian, even in 2022. If you’re in Nigeria, and you happen to be one of the million Nigerians with the japa dream, you will wonder, too, whether things will turn out any differently for you. But I imagine that you will shrug it off and keep hustling. Because what could be more Nigerian than that?

Vivian Nneka Nwajiaku, a film critic, writer and lawyer, currently writes from Lagos. Connect with her on Twitter @Nneka_Viv and Instagram @­_vivian.nneka