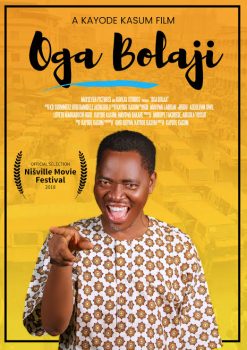 Oga Bolaji’s story is simple, beautiful and somewhat different from what we are used to seeing….

Kayode Kasum is a critics’ favourite, but not always for the right reasons. His penchant for excessive and oftentimes unnecessary comedy has earned him a reputation that is sometimes good (as with “Sugar Rush”) and sometimes not so good (as with “Ponzi”). But he has directed some serious-minded movies, such as “This Lady Called Life,” even if they still rely heavily on comedy. “Oga Bolaji” is one of his more serious movies, and, I dare say, one of his finest attempts.

The story is simple, beautiful and somewhat different from what we are used to seeing. Oga Bolaji (Gold) is a middle-aged educated man living with his mother in her house. A musician and former member of a band, he has tried several times to no avail to find a producer to support his music. He now wakes up to a daily routine of chores which he does reluctantly before his trip, headphones over his ears (this and the musical instruments in his room are the only reason to believe that he is a musician), to the bar where he works.

He is a poor man, although he does not dwell on that fact. Every morning, his friend Omoh (Ojefua), a bus driver, picks him from one bus stop and drops him off at another, for free. And before the day runs out, Oga Bolaji must have endured humiliation from his mother (Philips), from his co-worker (Oko), and even from the woman (Oshodi) who gives him free puff-puff in exchange for free newspapers but who still considers him to be a beggar — people who are not always kind to him but who mean well and have his back.

At night, he returns home, with no improvement in his status or his prospects, after his evening routine of drinks with his friends Omoh and Osas (Nomamiukor) during which they discuss the state of the nation as well as Osas’ refusal to take baths. Their drink, a cold jug of a mix of different beers obtained from bottles consumed by customers at the bar, is a testament to the hard-knock life they live. Yet, they live with an optimism that is admirable.

This movie’s characters have that unusual combination of resignation and optimism that Nigerians have mastered.
The story of “Oga Bolaji” is not only well-written but also well-structured. The movie runs for an hour and thirty-one minutes, and the first thirty minutes are dedicated to establishing the routine of the titular character and the roles of the people who participate in his routine.

Within those thirty minutes, the script introduces a small change to Bolaji’s routine that will ultimately shape the story. Bolaji encounters Ajua (Fakunle), a young girl who hawks oranges at the bus stop. Soon, he develops an attraction for Ajua’s mother, Victoria (Dada). The next thirty minutes are pivotal as the focus shifts to a subplot that reflects how “Nigeria happens to everyone, even children.”

Halfway through these thirty minutes, and through the movie as a whole, a tragedy occurs that Bolaji feels responsible for. Filled with regret, he makes room to accommodate Victoria in his routine as he works to make amends in the final third of the movie.

Between the news broadcasts on radio and the discussions of the characters on the deplorable conditions of the country, as well as overt acts of corruption that ultimately lead to the movie’s tragedy, the substance of the story as a social commentary cannot be denied. Plus, the characters have real personalities, although Omoh and Osas majorly function as comic relief to balance out the seriousness of the themes. And there is genuineness in the language, which predominantly comprises Nigerian pidgin English.

But even with a solid screenplay, a movie can still fail. Proper execution is of utmost importance. Transforming a good script to a good film is no easy job.

Thankfully, this film does not fail the script. The acting is strong all round, with almost every character coming as second nature to its actor. Even Fakunle, playing Ajua, puts up a splendid performance that is uncommon among Nigerian child actors. Passersby are real (though it is strange that there are always only two other passengers in Omoh’s bus each time he drops Bolaji off, except the one instance where there are three other passengers). And everything on screen and even at the background is alive, from the soundtrack to the scenery.

Something must be said about the bold manner in which it captures the hustle and bustle of Lagos, the environment surrounding Bolaji, in the process of establishing his routine. The chaotic beauty of Lagos, both the good and the bad, is what “2 Weeks in Lagos” tried but failed abysmally to put on display.

Yet, there is something off about this movie. There is a feeling of incompleteness with many of its scenes. Rather than properly transitioning, scenes are often cut too quickly. This flaw is most noticeable when a character’s speech gets cut off abruptly, even within scenes, instead of being concluded or, at least, faded out. The result is that the movie feels like a string of short clips as opposed to a continuous flow of events. And with all the comedy, those clips start to feel like skits.

However, wishing for the movie to have done away with comedy might be unfair. It is the comic element to it that makes it easier to stomach this important story till the end. As relevant and rewarding as this movie is, it is also monotonous and, consequently, a tad boring.

At the end of the day, all is well that ends well as far as this movie is concerned. “Oga Bolaji” is not one of the new breed of movies that abandons the fantasy of happily-ever-after. But is it truly a happy ending? Tragedies have happened that the characters can never fully recover from. They smile, poke fun at one another and look forward, but there is still sadness underneath all that laughter. In a way, the ending itself points to the spirit of the average Nigerian that it puts on show, with the knowledge that the next day will likely be the same, if not worse, but the hope that it might actually be better.