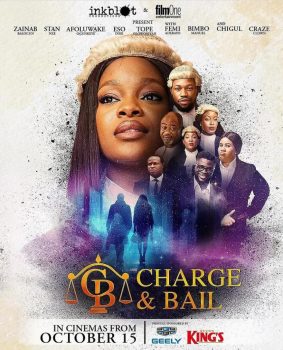 “Charge and Bail” Review: Inkblot’s Courtroom Drama is a Legal Comedy in Every Sense

What Charge and Bail really is, is a legal comedy. And I mean that in every sense. The film has an interesting premise, and it is actually very entertaining and funny. But as a Nigerian courtroom drama, it’s laughable…

The legal drama has always been one of my favourite genres. I hadn’t even gotten to algebra-level mathematics when I watched Ally McBeal. I grew up fascinated by the smartness of fictional lawyers, how their minds worked, how they walked and talked. Of course, I had no idea if the characters were spewing a bunch of made-up nonsense. But there was virtually no Nigerian legal fiction available to me back then. Now, there are some, even if they are few and far between. Inkblot’s Charge and Bail, directed by Uyoyou Adia (Till There Was You) and starring Zainab Balogun in the lead role, is one of the few.

Charge and Bail gets its title from a generally unethical practice among some lawyers who hang around court environments, soliciting and lobbying for employment from individuals who may need help in securing the bail of persons who have been charged to court. The film, itself, tells a fish-out-of-water tale about Balogun’s Boma Ossai, a young lawyer who leaves her United States law firm and returns to Nigeria where she is forced to work for a charge and bail firm.

With her plans to work as a big shot tech lawyer put in abeyance, Boma has to adjust to a kind of legal practice that she never imagined she would have to deal with. In the process, she not only finds a new passion, but she also finds love.

Expectedly, adjusting isn’t easy for Boma. The film makes it clear that she considers her situation to be a fall from grace. It’s not just that she made a first class at Cambridge, had a perfect GPA at Yale Law and was a hot-shot lawyer in a leading New York law firm in the US. She also happens to be a big deal back home in Nigeria. Her father, Olisa Ossai (Bimbo Manuel), is one of the highest-ranking lawyers in the country, and a partner at Apex, the reputable Nigerian law firm where she initially planned to work as a partner. She even “bagged a distinction at the Nigerian bar exam.”

She had her life planned out. And then, life happened. Between a mistake in her National Youth Service Corps (NYSC) posting and a bittersweet history that her father shares with Wole Adebutu (Femi Adebayo), the managing partner at the charge and bail firm she gets posted to, she finds herself hanging around courthouses and looking for clients to help with bail. And she has to report to people she thinks she is better than, including Dotun Adebutu (Stan Nze), the smug partner who commands the affairs of the youth corps members working in the firm. 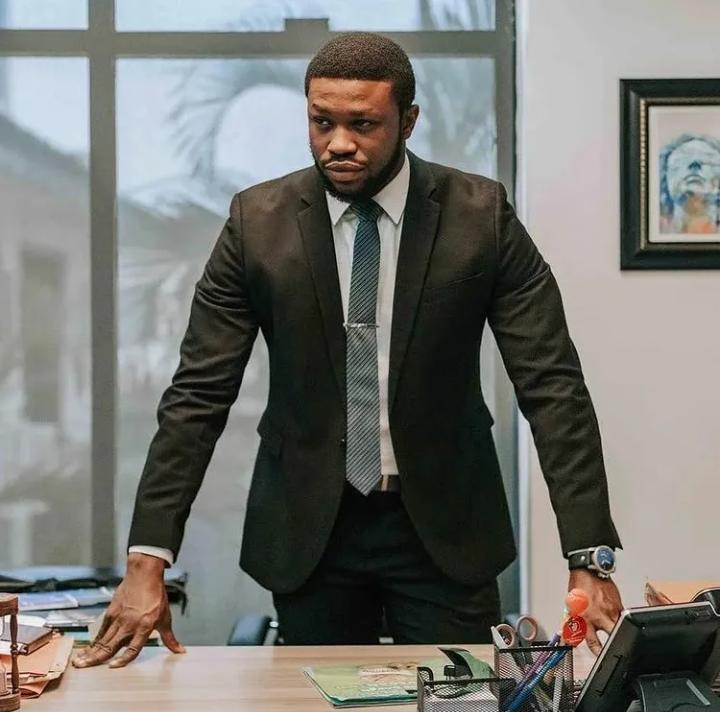 Boma arrives at Adebutu’s firm with a chip on her shoulder — demanding to get rejected by the firm so she can join her father’s, being rude to her potential seniors, and asking why she can’t go home to change when she shows up at the office dressed in the wrong colour and is offered a regulation dress. It’s a nice combination of naïvety and superiority complex, and it’s funny to watch as she unsuccessfully tries to throw her weight around before the reality of her situation compels her to come down off her high horse, and before she falls in love with helping innocent people.

The film — or perhaps the actor and real-life lawyer, Eso Dike, who plays the thankless and grossly underutilised role of Victory, an associate at Adebutu’s firm — seizes the opportunity to make a commentary on how, at the Nigerian Law School, foreign-trained students look down on their colleagues with Nigerian law degrees. That little bit of information turns out to be a synecdoche of sorts. The entire film paints a picture of a form of classism that exists within the legal practice, with the more privileged lawyers looking down on the less privileged ones. In fact, my favourite line from the film is one that captures this theme. It comes at the start of the third act, after Boma relocates to Apex, her father’s firm. Aisha, (Folu Storms) her best friend, observes that Boma isn’t very happy to be at Apex. She teases and, in the most casual way, says to Boma, “You had your whole life planned out, and now you’re throwing it away for poor people?” And after probing Boma about her budding relationship with her former boss, Dotun, Aisha jokes, “But he’s poor, isn’t he?”

But this classism is where the seriousness of the film ends. What Charge and Bail really is, is a legal comedy. And I mean that in every sense. The film has an interesting premise, and it is actually very entertaining and funny. But as a Nigerian courtroom drama, it’s laughable. Adia painstakingly sets the film in Nigerian courts, with shots of and scenes in actual Lagos courthouses, from the magistrate court at Yaba to the courts at Igbosere and even the Federal High Court. Also, the screenplay is deliberate about not using too much legalese. These are definitely high points. But the law practice, itself, is practically a joke.
With questionable costume choices, including one very strange overcoat worn by Dotun, the wardrobe is wrong more times than is forgivable. Even the court proceedings are way off track most of the time, from practices as basic as how a case is called in court or how lawyers announce their appearance, to the technical aspects like the kinds of questions lawyers ask in the course of the different types of witness examination, or the concept of laying foundation before giving certain types of evidence. Legal strategies are far from solid. Cases get disposed of in record time. Lawyers wear collarettes like they learned how to dress from British legal dramas, and announce their appearance like they attended Hollywood law school. And foreign terms are used with reckless abandon, with “counselor” instead of “counsel” as a repeat offender.

Unfortunately, Charge and Bail does not adopt the smartness of its foreign counterparts. Boma and Aisha were hotshot lawyers in the US before they relocated to Nigeria. Boma, herself, was only 25 when she made partner at her New York firm. Her father is a Senior Advocate of Nigeria. Even the film’s charge and bail firm is not a dumping ground for less than able lawyers, with Dotun bragging that he spent years “assembling some of the finest legal minds.” Yet, there is no brilliance in how any lawyer in this film practices law. The closest thing to great lawyering is Ossai’s courtroom performance in the closing sequence, buoyed only by Manuel’s rendition.

Then, the film takes an antagonistic approach to the relationships between its lawyers, the type that is often seen in American legal dramas, creating the impression that the relationship between lawyers on opposite sides of a case is usually hostile. That idea is a layman view as most lawyers understand that opposing counsel is not an opponent but a learned colleague. It is not uncommon to see prosecuting counsel and defence counsel sharing a joke in the middle of a trial. Of course, relationships between lawyers on opposite sides of the same case are delicate. But this film chooses violence over delicacy.

Charge and Bail will have you believe that lawyers who are out to get the same clients or who stand on opposing sides of a matter are always spiteful and quarrelsome towards each other. And so, Aisha worries about having to argue against her best friend, and a father embarrasses his daughter — with whom he ordinarily has a good relationship — in court, willing to risk her getting disbarred as if there is no other way to force a lawyer off a case. This father-daughter dynamic is nothing that hasn’t been seen before, even in Nollywood. Namaste Wahala, a lesser film than this one, explores the same dynamic of a father and daughter on different sides of the same legal action, and even though the subplot was entirely unnecessary in that film, it was better portrayed there than in Charge and Bail.

Nobody expects a legal drama to be perfectly accurate. There must be compromises with procedurals. But Charge and Bail feels like it was made by a person who watched a few foreign legal dramas, visited a Nigerian court once or twice, maybe asked a lawyer one or two questions, and decided that that they knew enough about the profession to make a film about it. It just doesn’t seem like any practising lawyer was consulted. And it is surprising because the screenwriter, Chinaza Onuzo, has previously written a good legal drama in the form of The Arbitration, and the producer, Zulumoke Oyibo (Superstar) happens to be a lawyer. 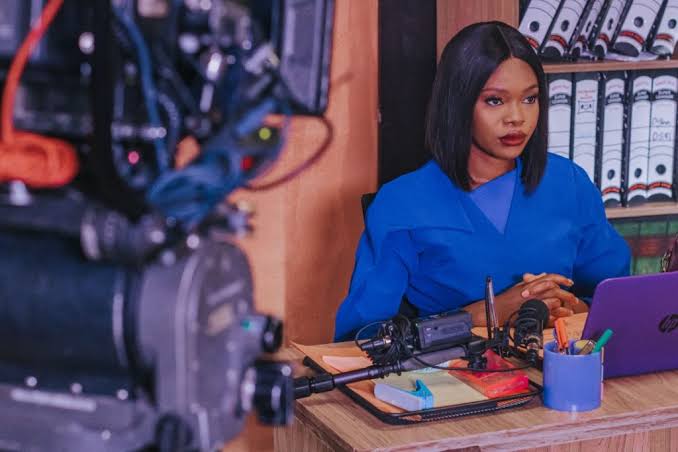 There are other things that don’t make much sense, too, and the entire NYSC part of the plot is chief among them. It appears to only exist because the screenplay couldn’t figure out any other way to justify the idea of a US lawyer relocating to Nigeria and finding herself at a charge and bail firm. The firm’s other corps members don’t exist within the story — except for one who is mostly irrelevant — and the NYSC plot gets disposed of quickly before sneaking back into the main plot when it becomes convenient again, very much like this film’s court cases. Besides, is anybody really going to buy the story that the uber-influential Olisa Ossai cannot “work” his daughter’s reposting directly from the NYSC Directorate? Or that Boma can so easily abandon her posting and become self-employed while still a serving corps member?

Also, I can’t for the life of me figure out why the subplot with the comic duo of “Barrister Nkechi” and “Barrister Adetola” (played by comedians Chioma “Chi Gul” Omeruah and Craze Clown) was necessary. Plus, the film’s soundtrack is just lazy and painfully obvious, playing around with phrases like “making trouble” and “charge and bail.”

Having said all that, I did enjoy the opportunity to watch a legal drama that is so close to home. In truth, Charge and Bail may easily convince non-lawyers. It helps that it is entertaining and backed by a more than decent production quality. But it isn’t smart or special. It will have you laughing, but it will not leave you impressed.

(Charge and Bail was initially released in 2021 and is now streaming on Prime Video here).