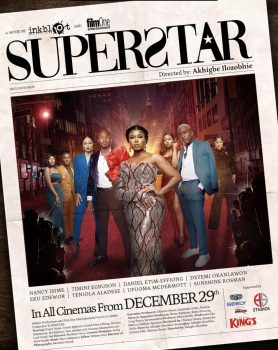 Superstar: Nollywood Movie Review: An Enjoyable Celebrity Story With A Little Too Much To Say

Superstar: Nollywood Movie filled with comedy, tragedy, romantic drama, quasi-social issues drama, and everything else in-between. It attempts to cover as much ground as can possibly be covered in any story about life in a movie industry…

We have seen Nancy Isime take centre stage before, most notably in Kayode Kasum’s Kambili where she starred as the delightfully chaotic eponymous character on a journey of self-discovery. This time around, for Inkblot Productions’ Superstar directed by Akhigbe Ilozobhie, more popularly known as Akay Mason (Elevator Baby, Day of Destiny), Isime shines as Queen Ejiro, a supposedly talented, hardworking, long-suffering actor on a journey of life and love in Nollywood.

Between their titles and posters, both movies are clear on one thing: they are about the characters Isime plays; everybody else is merely an addendum. But what both films seem to really want to be remembered for is that they are romantic dramas. Yet, they tend to be forgetful about that fact themselves. Let’s stick to Superstar, Inkblot’s tenth anniversary love letter to Nollywood, based on a screenplay co-written by Uyoyou Adia (The Ghost and the Tout Too), Inkblot’s co-founder Chinaza Onuzo (The Arbitration, Up North, The Set Up) and director Akay Mason.

The movie, which premiered around the end of 2021 and, consequently, crossed over to 2022, also features Deyemi Okanlawon (Swallow), Eku Edewor, Daniel Etim-Effiong (Happiness Ever After), Timini Egbuson (Elevator Baby), Teniola Aladese, Ufuoma McDermott, Sunshine Rosman, and Lord Frank (King of Boys: The Return of the King).

Superstar: Nollywood movie filled with comedy, a tragedy, a romantic drama, a quasi-social issues drama, and everything else in-between. It attempts to cover as much ground as can possibly be covered in any story about life in a movie industry. And while a movie can be many things, it needs to be able to blend the different genres in a manner that doesn’t feel overcrowded.

Understandably, this is not an easy job. But it has been done before. Chineze Anyaene made it work over a decade ago in Ijé: The Journey, a film that was praised for its scope, its ability to handle various social topics, and how it nails social comedy, too.

Superstar, on the other hand, doesn’t hit the mark. It tries to fit in as many scandals as it possibly can, because what’s a movie about a superstar without scandals, really? Then, it attempts to make a handful of social commentaries, from celebrity culture, to sexual harassment in the movie industry, to power imbalances, to ‘women need not be women’s enemies’ — because how else can it be the deeply impactful film which it ultimately is not? Bear in mind that the movie is also a love story, the type that is dreamy but also real. And so, the movie also explores love, hurt, and even downright grief.

There is no doubt that the themes and subplots are relevant, and many are very necessary. But the movie does too much, especially with the scandals. And instead of blending, it suffers from overplotting. As if it doesn’t already have a lot of material to work with, it just keeps throwing in more, furnishing unnecessary details, overstretching scenes that don’t require emphasis, and sprinkling advert every here and there. Effectively, it overcrowds itself and leaves its core stories to struggle for time, often collapsing them into montages as a quick fix.

One minute, Queen is auditioning for a reality show. The next minute, a montage shows that she is now famous. Literally out of nowhere, she is fielding questions from a jealous talk show host (Rosman) about roles we had no idea she was playing. Suddenly, she is admitting to her former best friend (Aladese) and former boyfriend (Egbuson) that she did fatal mean things to them that we never saw happen. And when her story changes course and becomes one of blackmail, we are just as ambushed as Queen is.

Then, after jumping around from one scandal to another, the movie finally remembers it is a romantic drama sometime in its second half. It revisits a filmmaker (Etim-Effiong) it introduced in the first act, with whom Queen had a meet-cute. The would-be couple have very few audible — albeit interesting, bitter-sweet conversations. But with so little time left to develop their relationship, we watch them fall in love through another montage, hiding away what could have been great chemistry.

When they encounter trying times, Queen deals with it in a montage. And when they somewhat prevail, we watch them do so through yet another montage. Simply put, there are one too many montages in this movie, most of which would not have been necessary if it had its priorities straight. 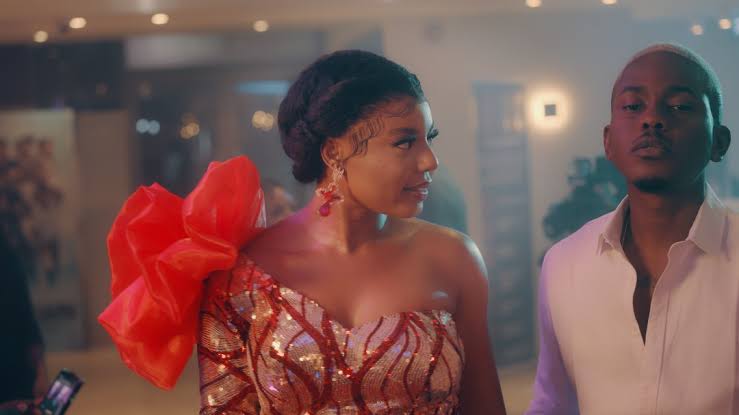 Perhaps, it would have helped if Superstar compensated for its overplotting with well-written characters. From Queen’s boyfriend who disappears the moment his relevance to Queen’s career disappears, to her best friend who also similarly disappears only to reappear in the last minutes when the movie needs to paint Queen as a charitable person, to her manager’s (Edewor) family that is suddenly conjured up so that Queen can be sorry that she didn’t know her manager-friend had a family, if a character’s business does not affect Queen, then it does not exist. But all these are forgivable. The real sin is that Queen, herself, is underwritten.

The movie tries to portray Queen as real and flawed, but it does that with reported speech and without walking us through whatever fuels her flaws. We watch her all the time, but we never really see her.

Held up by Edewor and Okanlawon, whose performances here are a big plus for the movie, Isime shines brightest in her quietest moments, where her expressions do all the talking — although it is totally welcome when she is her loudest, such as when Queen finally lets herself lash out at her ex. But despite her many quiet moments, she never really has any moment for introspection. It’s from one drama to another with this superstar, and she simply never catches a break.

With each sudden unfortunate situation, we are expected to believe that Queen has been affected, but the process she supposedly undergoes in dealing with the latest drama is either invisible or hidden away in montages. Isime’s aura is all that keeps us invested in Queen’s character, rather than an understanding of the character herself. It is so bad that when she finally hits rock-bottom, it is genuinely confusing how she got there, and the best we can do is to make assumptions as to what her feelings are.

To avoid spoilers, it suffices to say that Queen’s rock-bottom moment is such that should draw reactions from an audience, but in the cinema hall where I watched this movie, there were none.

However, it could be malicious of me to not clarify that Superstar is actually very enjoyable. For a romantic drama, the movie turns out to be unexpectedly and almost thoroughly unpredictable — well, except for Egbuson’s highly predictable and slightly over-the-top role. (Can Nollywood stop typecasting this man already?) After bagging a degree in Theatre Arts, Queen moves to Lagos in search of her big break.

She is vigorous about it, jumping at every opportunity even after being told by an industry powerhouse (Frank) that she’ll never make it, despite the talent he says she has. And even though you expect her to overcome — because this is a Nollywood romantic comedy and you have seen the trailer — the movie makes you wonder, initially, if she actually will. It keeps this energy throughout its course, interestingly serving up some decent surprises and, in the process, several good laughs.

It is certainly to the movie’s credit that it is able to rise above a handful of stereotypes while resting on few familiar tropes. Plus, the soundtrack is playlist material, even if the songs do not always directly contribute to the scenes onscreen. In Superstar, Akay Mason and Inkblot deliver comfortable entertainment with occasional sparks, and all its flaws combined do not succeed in putting out its fire.