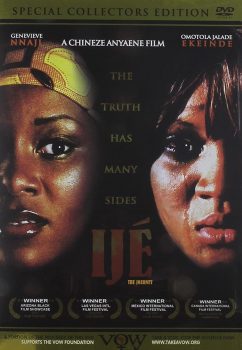 Movies From The Vault: Chineze Anyaene’s “Ijé: The Journey” Is A Compelling Take On The Nigerian Dream

The Nigerian dream is to japa. In a country that stifles free-thinking, growth, innovation, and justice, most people feel trapped and are desperate for a way out. It becomes nearly impossible to see anything but greener grass on the other side, even if the other side turns out to be a desert. Most Nigerian movies that dwell on migration paint colourful pictures of foreign climes, but is it really always rainbows and butterflies? What about the other stories that we don’t hear of? These questions are what Chineze Anyaene, fresh out of the New York Film Academy (at the time), sought to answer with her first feature film released in 2010. Set in both the United States and Nigeria, Ijé tells the story of two Nigerian sisters who leave Nigeria for the U.S for very different reasons. Anya (Jalade-Ekeinde) moves to America to pursue her dream of launching her music career. When, many years later, Anya is arrested for the murder of her American husband and two other men, Chioma (Nnaji) travels to Los Angeles, determined to keep her sister from prison. Dissatisfied with Anya’s lawyer whose strategy is to cut a plea bargain in exchange for an admission of guilt, Chioma engages Jalen (Ulrich), a struggling young lawyer with a fledgling career, to defend Anya. The film opens with young Anya and Chioma playing in the Nigerian countryside, before the shots morph into a montage that features scenes of Anya’s arrest and flashbacks of the event that led to it, coupled with a narrative voiceover of Anya’s letter to Chioma explaining the arrest. As the film forges ahead, it intermittently returns to that Nigerian countryside where Chioma and Anya once called home, using adequately executed flashbacks that provide a rich insight into the complex background of the two women. The score and soundtrack blend in seamlessly with the scenes, and with the way all the elements work together, there is no doubt that the cinematographers and sound editors were clear about their goals.

In an industry where excessiveness is a defining feature, Ijé thrives on sufficiency, and prioritises steadiness and simplicity in its storytelling over suspense and plot twists. It excels the most in its ability to handle various crucial subjects, from immigration to discrimination, racism, and Nigerian parenting. The film also dwells on the culture of silence and stigma surrounding rape in Nigeria, as well as the gender dynamics in Nigerian marriages, spousal violence, and ethnic divides. Ijé is precise and focused, effectively laying out these themes in less than two hours without exaggerating them or distracting from the simple story it sought to tell in the first place: an outsider’s journey in a foreign country.

The immigrant’s perspective of foreign climes as portrayed by this film is most noticeable in the way Chioma experiences and reacts to racism. Sometimes, she is aware and bothered, and it reflects in her curt responses and her body language. Sometimes, she is aware but unaffected. Other times, because of her significantly different background, she has no idea that she has even experienced racism. A memorable example plays out when Chioma knocks at the door of a Caucasian homeowner (played by Setian), who assumes that “the black woman at her door is there for charity” and informs Chioma that she already gives to “the Jolie-Pitt Fund every year”. Chioma is confused but not offended, as she merely tries to clarify as a matter of fact that she is not seeking financial assistance. On a deeper level, Ijé is a synecdoche in the way that it uses the experiences of Chioma and Anya in the United States to depict how, on a larger scale, Nigerians take drastic measures in fulfilling their dream of moving to “saner climes”. They have both been told as children that America is the gateway to heaven, but they both experience a myriad of disappointments that serve up a full recipe for homesickness. Anya in particular ends up having a life that in many ways mirrors her Nigerian childhood, but in the scene where Chioma tells Anya that she wishes the latter had never left Nigeria, Anya retorts, “What was there for me?”

Taking on the task of interpreting the roles laid out in this kind of film is no walk in the park, but Nnaji displays confidence in unfamiliar territory, and Jalade-Ekeinde satisfactorily commands the emotional range needed for the role she plays. Thankfully, they are blessed with a supporting cast that does not leave them to pick up the slack; Yekinni does a splendid job playing an American inmate. Nigerian movies with foreign casts do not usually get their pick of the top-billed foreign actors, but almost everyone on Ijé manages to put in a decent shift.

Unfortunately, because of its immigrant viewpoint, the film occasionally peddles stereotypical or unfair images of the host country. It dangerously implies that there is no culture of silence or stigma when it comes to rape cases in the United States. It also paints an unintentional but disturbing picture where the bad guys are usually Caucasian and the victims are usually black.

All things considered, Ijé: The Journey is an outstanding body of work. It is still very relevant, and its quality has not shrunk with age. Even over a decade later, it remains a showpiece of what good filmmaking looks like.

(On August 3, 2021, eleven years after its original release, Ijé: The Journey became available for streaming on Netflix. You can watch the movie here.)