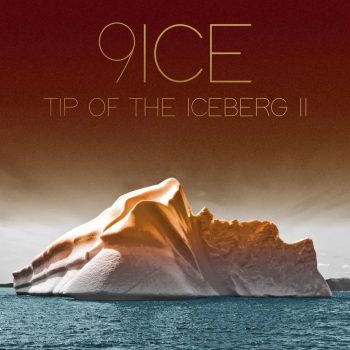 Tip of the Iceberg II is 9ice’s attempt at registering his once cherished brilliance in the mind of the listeners. Some of the fans might have moved on to much younger artistes, but we still have the core ones who view 9ice as a darling…

The last time 9ice had a hit song, Akinwumi Ambode was just a year in office as Lagos State governor. Ever since that hit song, 9ice has released four projects. His latest output, the second installment of Tip of the Iceberg, was released about four weeks ago, to little to no fanfare. How did the 9ice brand degenerate to this ignoble slope?

In 2008, 9ice was in his best element. His sophomore album, Gongo Aso, was a delight to the fans. It became one of the albums to shape the Nigerian music industry. A couple of years before this, 9ice had already released singles to above-average feedback. Take, for instance, a song like “Little Money,” which was released in 2000, failed to catch the needed attention. Also, the psychedelic-embracing “Ganja Man,” one of the early Afrobeats songs that promoted weed, would always strike a chord in the mind of  mainly cannabis smokers.

Born in Ogbomosho, an ancient town in the southern part of Nigeria, 9ice grew up in Bariga in Lagos State. He discovered early his innate ability to create songs, starting as a Fuji musician in the 1990s. He got admission to study Law at the Lagos State University, Ojo, but dropped out to face the music. When he named his debut album, Certificate, in 2007, a lot of people were not aware that that title was a tribute to the educational sacrifice he made by dumping law for music.

9ice’s lofty use of Yoruba proverbs, idioms, expressions, and his distinctive sonic delivery stood him out from his peers in the music industry. The success of his Gongo Aso album brought more baggage for him, but he failed to handle them properly. The much-publicised faceoff with Ruggedman, ID Cabasa, and the divorce saga with his then London-based publicist and wife, Tony Payne, were some of the reasons behind his decline as an artiste.

Nevertheless, 9ice still keeps dropping albums, even though none has been able to get close to Gongo Aso in terms of quality and acceptance.

Tip of the Iceberg II is 9ice’s shortest project ever. It stands as more of a collaborative body of work. A total of six artistes, and one unnamed artiste, appear on this eight-track album. Rexxie, Eskeez, D Plus, Cracker, Shabba, and Ploops worked as producers on this project.

When 9ice brags, he brags differently. He does it to your face. The album starter, “Jaiye Anthem,” is an animated tune. It harks back to the brilliance of the then-wave-making producer, Cracker–who produced the track. He appreciates God for his protection and blessing in his life. He’s full of life and seems to exude a positive aura. The contagious aura spreads all through the track. He treads on the mid-tempo track to create a sublime opening, a  reinforcement of his stately qualities.

Since 9ice was once a Fuji artiste, the features of the genre have become a staple in his discography. When he clamours for people to spray money on him on “Ninalowo,” he is simply alluding to a Fuji feature. Rapper Zlatan Ibile’s verse on this song sounds, oddly, oldish. His signature “Kapaichumarimarichopaco,” which opens this song,  has long ceased to exist in his recent work.

Tiwa Savage’s sonorous vocals on “Ko Kanye” were all 9ice needed for his gratitude-filled track. He starts the verse with an Arabic saying, followed by a Yoruba proverb. While at this, he switches to singing about the efficacy of words and positive affirmations. Moelogo’s backup vocals end the track.

Money and success have formed the bedrock of 9ice’s themes; nevertheless, on “Aye La Bowo,” he sounds some warning about the dangers of looking for money. He uses this platform to sensitise the youths, and correct the elders on their wrongdoings. All in all, it is a mix of topics that are never fully developed. “Aye La Bowo” is a reflective evaluation of the state of the nation.

What’s the place of 9ice’s legacy in the music industry? Is he underrated or not? These and many more were the topics the Alapomeji founder explored on the Wylclef Jean-assisted “Guru.” Both artistes are geniuses in their fields. They also seem to care less about those who downplay their efforts. 9ice and Wyclef Jean boast about their accomplishments on this track. “If they don’t give me accolades, I will give myself,” they seem to say. Beyond his raspy vocals, this track spotlights the album.

In November 2020, 9ice urged Nigerians to beg his wife for his forgiveness after he was caught on camera in quite questionable positions with another woman. He seems to address this saga on “God No Go Shame Us.” Although you might expect him to be somber in this song, the reverse is the case as he boasts of God’s protection and tries to motivate the listeners (this failed, for me, woefully). “God No Go Shame Us” is 9ice taking his luck too far.

(Read also: Adultery Scandals: How Immune Are We to the Straying Net of Infidelity?)

“Roboto” is built on sexual satisfaction. The lyrics are cheesy. It sees Reekado Banks name-dropping popular names like David Beckham, and Tonto Dike. “Roboto,” meanwhile, could have been plucked straight from a 2015 Wizkid’s record. Reekado Bank’s voice in his hook can easily be  mistaken for Wizkid. The mixing of the song could have been better done, too. 9ice’s vocals fluctuate on this track, sometimes, you find it difficult to hear him, and at some point, they increase.

The album climaxes with “Low Key.” The track marks the meeting point for two Fuji-hip hop artistes, 9ice, and Bella Shmurda. It’s still a nod to the album starter, yet, he is more reflective on this track. He throws shots at perceived enemies, and promises to live life more modestly.

Tip of the Iceberg II is 9ice’s attempt at registering his once cherished brilliance in the mind of the listeners. Some of the fans might have moved on to much younger artistes, but we still have the core ones who view 9ice as a darling. This album is miles apart from the quintessential 9ice many knows. With just two years into his 40s, he seems to be overly reflective; this should be expected. Still, he does too much, and his lingering, hoarse vocals sometimes hinder you from enjoying some of the tracks.