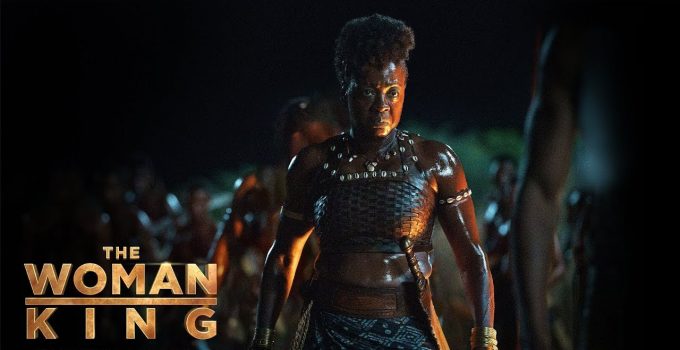 The Woman King builds a world that looks very African, so much so that it feels like a more cinematic, better written and less melodramatic version of an Africa Magic Epic film…

I could never have expected The Woman King to look so African. Not because it’s not an African production or because I don’t know what to expect from a big-budget epic set on the continent. After all, I have seen enough home-made epics to not be shocked by a strong presentation of ancient African kingdoms. If nothing else, in the past one year before Hollywood’s attempt, we’ve had impressive recreations of other ancient West African kingdoms in Izu Ojukwu’s Amina, Femi Adebayo’s King of Thieves, and Kunle Afolayan’s Aníkúlápó. My surprise was really because Hollywood doesn’t have a reputation for authentic African representation. And yet, despite all its old Hollywood influences, The Woman King builds a world that looks very African, so much so that it feels like a more cinematic, better written and less melodramatic version of an Africa Magic Epic film.

The Woman King was filmed in South Africa and features a diverse black cast that includes multi-award-winning American actor, Viola Davis; British-Nigerian actor, John Boyega; Ugandan-British actor, Sheila Atim; Britain’s Lashana Lynch; Nigeria’s Jimmy Odukoya; South Africa’s Thuso Mbedu; and even the famous Beninese musician and activist, Angélique Kidjo. Directed by Gina Prince-Bythewood (The Old Guard, Love and Basketball), The Woman King tells a fictional story of the non-fictional, pre-colonial West African Kingdom of Dahomey (present-day Southern Benin) and its famous all-female army, the Agojie, known by the western world as the Dahomey Amazons. The film is set in the 1820s, a time when Dahomey was under the leadership of King Ghezo (played by Boyega), and follows the Agojie as they defend and protect the Kingdom of Dahomey against the Oyo Empire (located in present-day western Nigeria).

The film opens with a battle in which the women warriors, led by General Nanisca (Davis), defeat a camp of Mahi captors and cart away with both Mahi captives and the Dahomey women they came to rescue. Frustrated with Dahomey’s tributary status to the Oyo Empire — with whom the Mahi have formed an alliance — and confident in his kingdom’s military might, King Ghezo decides to go to war with Oyo. With the kind of fierceness and endurance that the Agojie exude, it really doesn’t seem like it would be too difficult a job for them. They even have spiritual backing in Amenza’s (Atim) Ifá beads, and an excellent trainer for new recruits in Izogie (Lynch). But Nanisca’s painful history with Oyo’s General Oba Ade (Odukoya) could very well impair her judgment on the battlefield. And her unexpected relationship with a bright but impatient new recruit, Nawi (Mbedu), comes with its own complications.

Let’s get all the obvious stuff out of the way first. The Woman King is entertaining and exciting and beautiful, with attentive cinematography and understated set pieces that still hold so much wonder. The costuming is remarkable and rightly colourful. The directing is immaculate. The screenplay is mostly well-written, even with its slow parts and predictable twists. The image of sisterhood that the film paints shines so bright even on battlegrounds. The energetic action scenes are choreographed with outstanding efficiency and sufficient brutality. And the performances are nothing short of brilliant. Davis embodies yet another character to be worshipped as the controlled, war-worn but battle-ready leader who has earned her place as a general. Mbedu is a revelation with her childlike, innocent strong-headedness. Boyega plays the king with appropriate youthful arrogance while clearly having a good time. Lynch is simultaneously fun and fearsome as Izogie — I could not take my eyes off her. Atim portrays Amenza with a softness that still never raises a doubt about her strength as a warrior. And Odukoya’s commanding presence — I wonder if he drew inspiration from the more serious attributes of Winston Duke’s Black Panther character, M’baku — raises questions about why Nollywood hasn’t been casting him in major roles in big-budget films.

Of course, the one uniform drawback across most of the performances is the very many different accents that come into play among the film’s people of Dahomey. It is, after all, an American production with a black cast that’s drawn from various countries and ethnicities. As Prince-Bythewood notes, Dahomey was a state that had within its borders not only its indigenes but also captives and immigrants escaping war in their own hometowns. But that melting-pot history does not always explain the borrowed accents and other characteristics.

There’s a Dahomean king with a deliberate Nigerian accent and mannerism (Boyega revealed that parts of his acting were “copied and pasted” from his Yoruba father), an Agojie warrior of likely Yoruba origin (Amenza categorically states that she came into Dahomey as a captive, and shealso happens to be a worshipper of Ifá) with an accent that’s not quite what it should be. These two, I noticed because I am Nigerian. I imagine Beninese nationals will easily point out others. And still, I appreciate the little favour of not having to listen to that generic African lilt that Hollywood thinks every African has. For once, the accents are somewhat easy to ignore and, big picture, don’t even feel like much of an issue.

What is an issue, maybe a wrong move even, is the history revisionism that The Woman King deliberately falls into. This is not a film that’s lacking in research so that we can accuse it of ignorance. Its expansive knowledge is evident in the tiny details, like how it explores the patriarchal nature of the Kingdom of Dahomey despite being home to such a magnificent all-women army, its intentional use of cowries and specific fabrics as a status marker among the people of Dahomey, and how its wardrobe reflects the Islamisation of the military headquarters of the Oyo Empire. And there’s no denying its tact in how it exposes Oyo’s part in the transatlantic slave trade as well as the involvement of other African tribes, particularly the Igbos and the Mahi people. Or in its portrayal of how the European slavers exploited intertribal conflicts in powering the slave trade. Or even in its setting in a time after the abolishment of slavery by the British and, occasionally, in one of the ports where the Portuguese were allowed to continue slave trade per a treaty with Britain. (For some light reading, there’s a Brittle Paper article that delves into the accuracy of some of these elements.)

And yet, The Woman King goes ahead to sanitise Dahomey’s part in the slave trade by converting King Ghezo and his female warriors into anti-slavery reformers of sort. Plus, its continuous pan-African messaging, as inspirational as it is, creates an impression that is very much different from what Africa was at the time in which it is set (and what it sometimes still is) — a world of its own where skin colour was not the major determinant of who was an ally and who was an enemy.

Perhaps, it’s just Bythewood and screenwriter Dana Stevens (Fatherhood, Safe Haven) wishing that things had happened this way instead, that Ghezo and his army had chosen palm oil trade over the enslavement of other Africans. It could also be because the filmmakers want us to feel a particular way about the Agojie. The Woman King wants us to feel pride, excitement and some connection with these fierce, legendary African women. It wants us to love them and adore them, and it can’t quite figure out a way to do that if they’re not actively fighting slavery. But as a history that too much of the world is ignorant about, including Africans on the continent and in the diaspora, the result is a worrisome miseducation. Since the release of The Woman King, I have had to give history lessons to several people to disabuse their minds of the idea that the Dahomey state voluntarily ended their involvement in the slave trade. I have had to explain that Ghezo’s hands were forced by the British, and that even then, he was unwilling to give up the slave trade that made him and his people so wealthy. Agenda or not, The Woman King turns a part of slave trade history on its head, and it is important that we talk about its revisionist history, regardless of how much we love the film.

And I really do love this film. While the concept of a big-budget African historical epic isn’t as ground-breaking as Hollywood would have us believe — again, there’s been plenty of that in Nollywood alone this past year, all of which are currently streaming and have been reviewed by Afrocritik — The Woman King is an excellent piece of cinema. If you ignore the fact that this is a movie that has its core in history, and watch it as fiction with no care for the historical implications, The Woman King is superb in every other way that matters. But we cannot and should not ignore the historical implications because, ultimately, that is what matters the most. Still, this film is anything but unworthy. You might need to have a history text around when you do, but if you haven’t already, you should definitely see The Woman King.

(The Woman King is showing in theatres.)