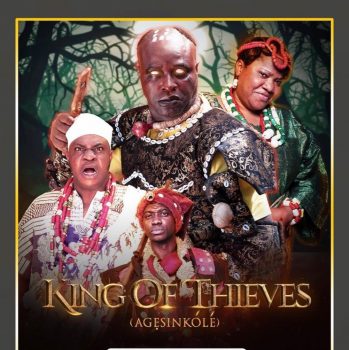 But if this is the minimum standard for the coming big-budget epic movies from Anthill Studios and Euphoria 360, and even from other filmmakers in the country, it is probably safe to say that we are in for a breezy ride…

After Izu Ojukwu’s Amina, an epic about the eponymous pre-colonial Northern Nigerian legend, debuted on Netflix in November, 2021, it made sense that other big-budget or cinema epic movies would follow behind. Barely a month ago, The Rise of Igbinogun, a Robin Hood-style epic, premiered in cinemas. Following closely is King of Thieves (Ogundabede), the first child of a partnership between Niyi Akinmolayan’s Anthill Studios and Femi Adebayo’s Euphoria 360 for the distribution of big-budget Yoruba epic movies. Perhaps, because of the quality of the low-budget epics that came before, plus the harsh response to the big-budget Amina, not much was expected of King of Thieves. Thankfully, Adebayo’s brainchild jumps most of the potholes that Ojukwu’s movie fell into, and King of Thieves successfully leaves an impression.

The movie opens in what looks like a present-day art gallery. An unnamed attendant, played by veteran actor Segun Arinze, comes upon a woman looking at a picture of a scary horse rider hanging on the wall. She doesn’t know the history behind the picture, so the attendant takes the opportunity to educate her. “This is a story of bravery, vengeance and justice,” he says. And as he narrates, the movie goes back in time to an ancient Yoruba Kingdom of Ajeromi and settles on a group of men riding horses, looking like angry warriors. Their leader stops to shoot a human head (which looks very much like his own head) sticking out of the ground with the rest of the body buried. Then, as they ride off, we relocate to a scene where three men are being executed for stealing, a crime which is so forbidden in the kingdom that the punishment is death.

But those scenes are mostly just there to set the stage. The story really begins with a coronation. Adegbite (Odunlade Adekola), son of Tadenikaro, is to be crowned Oba (king). The coronation is quite the show, a festival of culture and rituals put on display through a sequence of interesting scenes strung together and held up by Arinze’s explanatory narration. To complete the rituals, the new Oba must pay homage to the different factions of the kingdom: the witches, the wizards, the Sango Oracle, the masquerades, and all the spiritual forces. They all accept him, a king loved by all. But as soon as he ascends the throne, he finds himself thrown into troubled waters.

A band of robbers, the horsemen we earlier saw, are terrorising the kingdom. Under the leadership of Agesinkole (Femi Adebayo), described as “Ogundabede, the King of Thieves,” they rob, kill and enslave the people of Ajeromi. Nobody knows their motive, and no one can overpower Agesinkole; not the Oba, or his chiefs, or the spiritual forces. In fact, all the King’s forces and all the King’s men cannot put an end to Agesinkole’s menace, and the bandit only grows angrier and more vicious with each attempt to stop him.

Meanwhile, on the sidelines, a parallel plot plays out. Oguntade (Ibrahim Chatta), the generous head-hunter, has a bitter wife (Aisha Lawal), and unless he makes a sacrifice to Ogun, his ancestral god and the god of iron, his wife’s bitterness will lead to her death. Eventually, both plots collide in a surprisingly effective climax: a battle of incantations and spiritual fortifications.

Co-directed by Adebayo Tijani and Tope Adebayo Salami, King of Thieves seizes every opportunity to soak itself in the elements of its place and time — from the Oba’s palace to the market, from the coral beads to the rich adire (tie and dye) patterns, from the mountains to the streams — held up by top-notch cinematography by Idowu Adedapo (the skilled hands behind Road to Yesterday and King of Boys and a compelling soundtrack. Between close-ups that capture tiny details and wide shots that pull you into the scene, and with the tribal score, the chants, and the bits and pieces of praise singing sprinkled here and there, the movie immerses you in its environment such that there is a constant awareness of its cultural space. Plus, the fact that the dialogue is in the indigenous language of the Yoruba people it portrays solidifies its authenticity in a way that English could never have done.

King of Thieves is said to be inspired by Yoruba mythology, but the epic is more or less a retelling as opposed to an accurate portrayal of folklore. The screenplay, written by Yinka Laoye from a story by Femi Adebayo, wields its creative licence with wisdom, weaving a story that is identifiable and believable, while avoiding unnecessary grandness and complexities. The result is a direct and coherent tale that impresses without trying too hard.

Where the screenplay suffers is in its inability to use its characters collectively to further the purpose of the story. Characters in King of Thieves are often easily disposable or created for the purpose of executing some errand, after which they all but disappear. Oba Adegbite appears onscreen from time to time usually for the sole purpose of expressing worry or pain, but he rarely gets involved in handling crucial matters of state, like dealing with the band of robbers that have plunged his kingdom into chaos. Oguntade’s father shows up as a messenger to send his son on a mission but is nowhere to be seen for the rest of the movie, not even when the mission leads to dire consequences. Even a prince appears midway into the film just so that he can be used as a plot device.

But while the characters may be underutilised, the actors are not. Femi Adebayo leads a mostly strong and starry cast with an energetic portrayal of Agesinkole, the man and the myth. His character does not say much, neither do his missing eyeballs, but Adebayo carries the character with staunchness. When he does speak, sound effects are often added to imbue his voice with some power. But those effects are barely needed; without them, Adebayo’s voice still commands. Most of the time, however, he speaks through his right-hand man, played by Ibrahim Yekini who portrays his character’s wickedness with finesse and subtlety.

The king might not play as much of a role as he deserves, but Odunlade Adekola delivers on the available worry and pain with sufficient nuance. Toyin Abraham, playing Mobonuola, the wife of the Oba, never goes out of character even when the supporting actors around her forget that cameras are trained on them as well, and not just on Agesinkole. And whenever Adedimeji Lateef appears onscreen as Abegunde, the famed Lafongido masquerade (just saying the name “Lafongido” makes me want to break out into his praise song), it is as difficult to not take him seriously as it is to not laugh.

King of Thieves is the movie Amina tried but failed to be. It’s not that Adebayo’s movie is perfect. It’s not. The visual effects, especially, leave a lot to be desired. But if this is the minimum standard for the coming big-budget epic movies from Anthill Studios and Euphoria 360, and even from other filmmakers in the country, it is probably safe to say that we are in for a breezy ride.