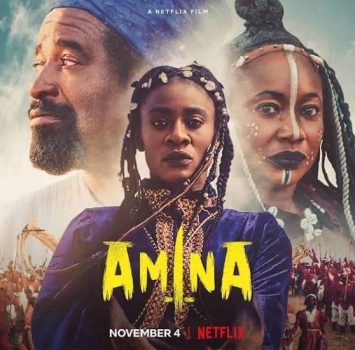 …it flounders both as a period piece and as a story. And it fails to do justice to the legend that is Queen Amina of Zazzau.

When I first heard that a film about Queen Amina of Zazzau was in the works, I was excited. Her story has a huge cultural significance, not only for the people of Zaria (modern day Zazzau), but also for women and girls across Nigeria. Then, I was wary, afraid of the several ways the project could be a disaster. But when I read that Izu Ojukwu, award winning director of some of the most critically acclaimed films of his time — from “Sitanda” in 2006 to “’76” in 2016 — would be directing the film based on a story by producer Okey Ogunjiofor who also produced the classics “Living in Bondage” and “Nneka the Pretty Serpent” in 1992/3 and 1994 respectively, I became excited again.

I carried the excitement into the film and, though I often found myself conflicted, I managed to hold on to it till the end. But after much thought the night after, I came to terms with the fact, that, sadly, Ojukwu’s latest offering is not a great movie.

A historical epic, “Amina” attempts to chronicle the journey of the 16th century legend, Amina of Zazzau, as she rides the path of her destiny, growing into a warrior queen in a patriarchal land. At first glance, the film itself is an exciting journey into pre-colonial times. There is richness to it, with its scenery, costuming and music score evoking the feelings that period films seek to evoke. The cinematography is decent, the fight scenes are adequately choreographed, the battlefields are convincing, and the visual effects are generally well done. In fact, if one looks beyond the flaws that plague this film and watches it solely for entertainment, the movie might prove to be enjoyable.

But the flaws are of the nagging type. They are persistent, running like multiple weak threads throughout the fabric of the film. And it is almost impossible to watch this film for entertainment only, anyway. Amina of Zazzau is a legend with an important story. To choose to tell her story is admirable, but it comes with expectations that are as heavy as the figurative crown she wore. In lesser hands, those expectations may have been lowered. But in the hands of Ojukwu and Ogunjiofor, it hurts that “Amina” falls short in one too many ways.

The first serious flaw in this film is its use of English language. In a decade when non-English films, like South Korea’s “Parasite” and “Squid Game,” have gained global attention and predominantly English films like Genevieve Nnaji’s “Lionheart” have been disqualified from international awards on the basis of language, choosing to so much as utter English language in a film about a pre-colonial (and even pre-Nigeria) kingdom is a very odd choice. In “Amina,” the English language is a well of distraction that never runs dry, constantly sounding out of place and consistently causing annoyance to the perceptive viewer.

An inevitable pitfall of its choice of language, most of the dialogue does not fit into the period in which the film is set. For example, the phrase “butterflies in the stomach,” used a couple of times in the film, has an American-English origin with its first recorded use in the 1900s, four centuries after the birth of Amina. It is this misstep that takes away from its credibility as a period piece, and using words such as “seasons” and “suns” replacing “years” and “days” is barely a quick fix.

Truthfully, making it an indigenous language film would ultimately not have saved this film. But the most authentic bits of the film come in Hausa, and if Ojukwu had abandoned English Language in favour of indigenous languages, “Amina” would, at least, have more legitimacy.

To its credit, the film is engaging, weaving a story that is separate from its central character but still very much about her. There are events happening without her knowledge, acquiescence or participation, but the outcomes are hinged on her destiny. And the film adeptly explores the concept of destiny itself, with Amina stumbling upon the path to hers before accepting it as her mission.

In walking this path with its titular character, the film does not opt for comfort by holding on to the lives of its dearest characters. But it does not sacrifice them just to score cheap points for plot twists, either. Fate is a strong enough justification for each sacrifice, and vengeance, although it cannot make up for the insufficient show of grief, is a plausible reaction.

However, the plot soon loses its way, fast becoming incoherent and difficult to follow. There are confusing time jumps, and it is never truly clear what Amina is fighting for: peace, revenge, or the throne. The work gives no insight into Amina’s thought processes as a warrior princess, consequently portraying her as rash — a woman who pits her ally against his own people and goes to war against her own, unintentionally leaving several casualties in her wake. Then, it tops it all off by spinning a romance narrative that feeds into Nollywood’s obsession with independent women needing men to complete them, as if Amina would be less womanly if she did not fall in love with a man.

It appears that the filmmakers felt the need to reconcile the legend with the stereotypical Nollywood woman. The legend Amina is known to have been opposed to marriage, but the movie version quarrels with her father to be with the man she loves. Of course, a historical film is allowed certain creative liberties, but “Amina” goes overboard. And when it makes its points about destiny and sacrifices in the end, they do not justify the confusing path it took to get there.

The acting could have been a buffer. Unfortunately, Lucy Ameh, who plays the eponymous legend, embodies the expected spirit of defiance but ultimately does not quite have the necessary charisma or commanding presence. In fact, Habiba Ummi Mohammed, playing Amina’s sister, Zaria, holds more interest than Ameh does, a function of both the script and the acting. Even Jenevieve Ogunjiofor is more charismatic as young Amina; her efforts are undeniable, especially in body language.

Folusho Yomi-Olugbodi’s brief performance as young Zaria is plagued by the dragged speech that often characterises the performances of Nollywood’s child actors. Magaji Ibrahim Mijinyawa, in portraying Madaki is sneaky enough for a man with his eyes on the throne of another, but he, too, lacks the commanding presence of the commander of Zazzau’s almighty army. And Clarion Chukwura, Ali Nuhu and Abu Chris Gbakann might have put up the best performances, but even theirs do not capture the magnitude of a film of this nature.

The film sets Nollywood on the right path, igniting a confidence in the industry’s ability to explore the stories of cultural and historical legends, from Queen Moremi to the Jaja of Opobo, without creating total disasters. But it is an underwhelming attempt in itself. After the success of “’76,” which excelled not only as a period film but also as a story, “Amina” could have cemented Ojukwu’s place as Nigeria’s master of historical storytelling. Unfortunately, it flounders both as a period piece and as a story. And it fails to do justice to the legend that is Queen Amina of Zazzau.