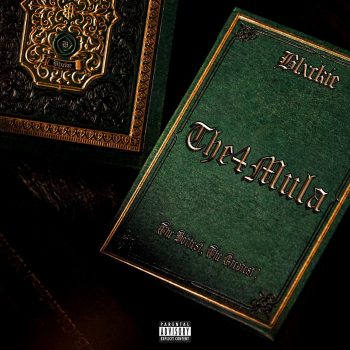 On “THE4MULA,” Blxckie Gets Lost in a Sea of Thematic Monotony

Monotony remains the keyword on this album. The whole repetition of the grass to grace story isn’t to create emphasis; rather it shows an artiste who is stuck in the mud creatively…

A Google search of the name, “Blxckie,” would bring up numerous news and features about him, most of which are reportage about his growth in the South African music scene. To galvanise his evolution, the rapper, singer, and record producer dropped a tape two weeks ago titled THE4MULA, a follow up to his debut album, B4Now, which was certified gold by The Recording Industry of South Africa (RISA). Ever since the release of B4Now, Blxckie’s life had never remained the same. His new body of work, THE4MULA is an album that clocks the twenty-one minute mark with Trap and Hip-Hop forming its foundation.

“plug call,” a freestyle, starts the project. It is a tell-it-all tale of a rapper who basks in his success. Blxckie gives a shout-out to his brother, and beams a smile to the women who listen to his music. He goes further by giving a reminder of how he changed the status of rap in South Africa when he says, “Game was too dirty, I came with the broom and I clean it up.”

Blxckie lets his heart out on this starter. Beyond the bragging, he tells the story of how he rose from obscurity to fame at just twenty-three years old. Blxckie is yet grateful for the blessings. The bop-bap rap type of beat mixed with trap production gives the rapper a chance to ride and effortlessly flow along. “plug call” is a short and precise pointer to the eight tracks left on THE4MULA.

“ronda” connotes different meanings. On this song, Blxckie raps about his new state of mind, and of how spending money is no longer a problem for him. The hook lays the foundation for the first verse which talks about girls, as well as the second which is a nod to his new state of mind since he tasted success. Blxckie also gives a shout-out to the young and bright artistes currently making headway in the music industry. Blxckie  wears his heart on his sleeve. He’s not surprised by the success; rather, he swims in it. And while he’s grateful, he is also quick to tell everyone that he was never lucky with success but worked hard from the beginning. The money and women are merely appendages to the baggage success brings, Blxckie seems to say through this song.

“werrkk” is built on Trap and Hip-Hop beats. The crowd vocals underline Blxckie’s attention to detail. It’s a sex-spiced song, but Blxckie and the featured artiste, Mench, made it so alluring that the vulgarity is diluted and less noticeable. Spanning a  one minute, forty-three seconds mark, “werrkk” remains the second shortest song on this project. The song illustrates the artiste’s sexual appeal amongst women. In the first six lines of the song, Blxckie gives a background check on the situation; how a girl doubted his sexual prowess and, to punish her, he had a “nice time” with her and her best friend.

Blxckie recycles the theme of fame and success on THE4MULA. When you listen to “sss,” you observe that the rapper might just be stuck with the headiness that comes with his current success. On “sss,” he talks about fame, money, and success, the  typical Trap trilogy. The delivery is flat. And although the words are well chosen, the betrayal is still felt, and some are unforgivable, he seems to say with some of his lines. In the pre chorus, he raps, “Niggas tried to dim my shine, I ain’t even payback. I was just sticking to the code. When I found bitch niggas ain’t even say sorry. Realised the game too cold.” In hindsight, this record serves as a form of purgation for Blxckie.

It’s safe to say that THE4MULA is all about money, success, bragging, and vanity. On “investigate,” K1IIbrady and Scumie join Blxckie to rap about their success, and how they create monster hits with ease. They rub their successes in your face. K1IIbrady and Scumie had the upper hand on this song. Their cadence is effortless. They ride the rhythm and deliver a hard-pushing bar which closes the song.

“together” swirls between love and bragging. Blxckie raps about his love interest and promises to do everything for her. He relives the hedonistic lifestyle they have been living. The production shimmers in baseline, synth, and drums. The lyrics are difficult to decipher, yet the aura the song brings is contagious. It’s Trappy and is bound to make you move in your chair. This type of song might not be suited for a shindig night-out at the club but it would be a cool party starter at a house party.

Red Bull created the series, 64 Bars, which brought together rappers and producers who have never worked together before, to collaborate in the making of a song over 64 bars. Blxckie’s participation in this initiative made the cut for this album. Titled “abdullah flow freestyle,” we are presented with a freestyle that leverages the triple flow type of rap. The freestyle sees Blxckie rapping about his state of mind, success, and the days before success.

It has not been all rosy for Blxckie since he started rapping. He raps about this on “khuphuka.” He tells us how he made it out of the hood to dominate the South African music scene. “khuphuka” is merely  a  continuation of  some of the tracks on this project like “plug call,” and “ronda.” You wonder how the listeners won’t get tired of the deliberate repetition by Blxckie. A voice note from a fan plays as Blxckie’s raps on. In this clip, the fan commends the rapper for lighting up the South African music scene and being proud of his black skin.

Released over a year ago, “kwenzekile” is the oldest song on THE4MULA. It serves as a bonus track. Blxckie, Madumane, and Chang Cello give this song a sonic breath. Laid on a hard percussive production, alongside a skittering drumline, and gong, the song is a nod to good times amidst crisis. The lyrics are simple with an overt repetition of lyrics.

Blxckie is arguably one of the biggest South African Hip-Hop heads right now. With the impressive success of last year’s breaking album, B4Now, THE4MULA sounds more like a topping on the cake. However, it could have been better.  The title of the album seems self explanatory. It’s about money. Blxckie sticks to the script which revolves solely over money and women. Is this sustainable in the long run?

Monotony remains the keyword on this album. The whole repetition of the grass to grace story isn’t to create emphasis; rather it shows an artiste who is stuck in the mud creatively. There is a need for a break that would lead to some sonic changes for Blxckie if he truly wants to eke a firmer place  in the South African music industry.