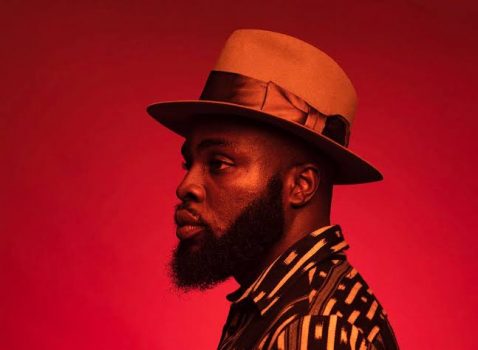 In M.anifest’s Madina to the Universe: the Ghanaian Rapper Pursues Global Exploits

Madina to the Universe, a title that pays homage to his village, Madina, the place which has become an integral part of his journey. But while he reflects on his childhood, he has his eyes on the globe…

Ghana’s prolific rapper, revered storyteller and poet, M.anifest, is back with his fifth studio album. Unlike his four previous projects, the new album is a creative shift and explores a new arch in his artistry.

Kwame Ametepee Tsikata better known in the music world as M.anifest has the music blood flowing in him. He is the grandson of one of Africa’s foremost ethnomusicologists and composers, J.H. Kwabena Nketia. His childhood was thus spent listening to music at street record stores, attending parties, and reading books. He developed his talent while schooling in the United States of America. After making some impact there, he returned to Ghana over a decade ago.

Although M.anifest’s talent was quickly spotted by music critics and fans, he had to contend with some inner and outside forces before he could be known. Little wonder when he took a shot at fellow rapper, Sarkodie via “God Mc,” in 2016, a lot of pundits felt it was a strategy to raise awareness about his craft—which he did.

One of the domino effects of the controversy with Sarkodie was the release of the critically-acclaimed concept album, Nowhere Cool. The rapper once judged the album as his favourite. After a careful listen to Madina to the Universe, one might disagree with him. 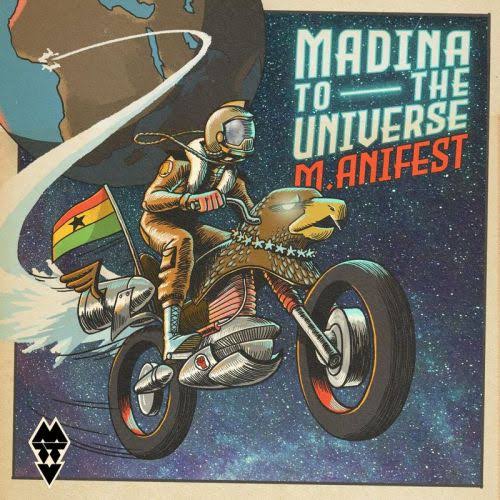 In 2019, M.anifest released the love-esque extended play which he called The Gamble, a cut from his scrapped “Ghana Man Time” album. The 2020 COVID-19 pandemic changed the way artists made music. For M.anifest, the lockdown provided an opportunity to explore and have a conversation with himself. For one, the lockdown helped him put an end to his identity crisis. The dining room section of his house became his most cherished place as he recorded every day, fleshing out ideas; the result was the Madina to the Universe album which he released in November, 2021.

With the title, M.anifest pays homage to his village, Madina, the place which has become an integral part of his journey. But while he reflects on his childhood, he has his eyes on the globe, and nurses the dream to take his sound to a global audience.

The album opens with “MTTU” which stands for “Madina To The Universe,” the song, an allusion to his life, a peep into his childhood and current state of mind. The lines run clearly with the trumpet doing justice to the track.

“Confusion,” a previously released track, made the cut for the album. Centered on a guitar and piano underneath a Ghanaian traditional sound, “Confusion” takes the listener through the turmoil that citizens of Ghana go through in their daily activities.

M.anifest’s years of honing his skill as a rapper and revered storyteller come to bear on the hip hop sampled “Scorpio flow.” Although he might have played the lover boy and became vulnerable on some tracks, he retains the ability to kick bars with any rapper around. Only two rappers I know in Africa, Me and Nobody in particular. Vanity at its peak.

M.anifest revealed what loving in the US felt like on “Bob and Weave,” with singer M3nsa on the hook. M.anifest’s rap is laid back and reflective; the topic adheres to the unfairness of life and circumstances.

Nigerian rapper, Ladipoe and M.anifest bounce on each other’s energy on “Best For You.” The lines are enamoured in life lessons: the ability to make germane life decisions when the need arises—more importantly about things of the heart.

The bopping track “No Fear” is doused in rap talk and focused on life goals; it features the sonorous voice of Moily on the hook; M.anifest came second on this.

M.anifest’s ability to bring respite to the downtrodden has not been fully appreciated. He spotlights the most vulnerable topics with his rap lines; on songs like “Weeping Cloud,” he employs the saxophone in amplifying his message of hope.

The rebranded Adekunle Gold comes through on “Game Over.” Both artists are vulnerable and expressive about how they feel about a girl. It sounds like one of the tracks that would be on heavy rotation if properly pushed.

On “Unicorn Flow,” a voice note from the rapper’s mother was played where she reveals a bit of what the rapper was like while growing up.

“Lavida” connotes an unruly, wild party or lifestyle. After the reflective and love tunes, turning up for parties won’t be bad, he seems to say.

The Dancehall king, Patoranking got the spotlight on “Clean and Pure.” Just like most of his features, he held the hook down and complemented M.anifest’s rap lines.

M.anifest has always been the mouthpiece of the masses. On the satirical track, “E No Easy,” he narrates conversations he had with strangers, all tethered to the hardships in Ghana. “E No Easy” reinforces why M.anifest is regarded as one of the best rappers to come out of Africa. 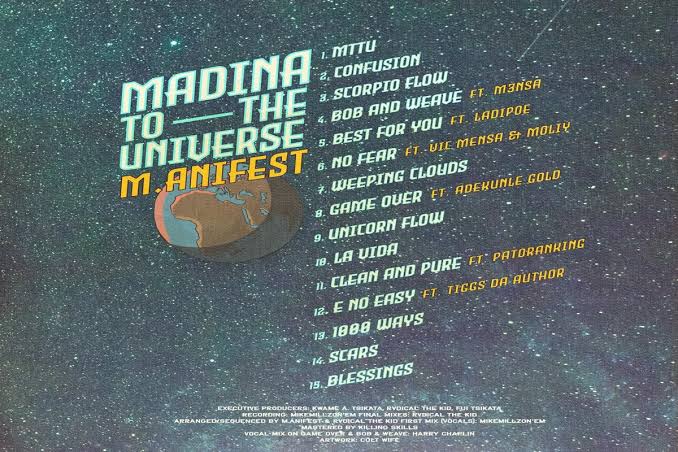 On “1000 ways,” M.anifest narrates a conversation he had with his lover. People all over the world deal with scars in different ways.

The rapper reveals his fear, loss, and battle with drugs on the 14th track, “Scar.” On the last track, “Blessing,” M.anifest took the music to church with thankful and reflective lines. The backup gives off a choral mode.

At the end of the 43-minutes spin, those who adjudged Nowhere Cool as M.anifest’s best album might have a rethink.

Madina To The World was long in the coming, but the wait was worth it. M.anifest took his time in curating the project; on each track, the honesty and attention to detail could be felt. In the short attention span era, M.anifest was smart to make the time frame less than an hour while the message of hope, love, and compassion reverberated through the album.