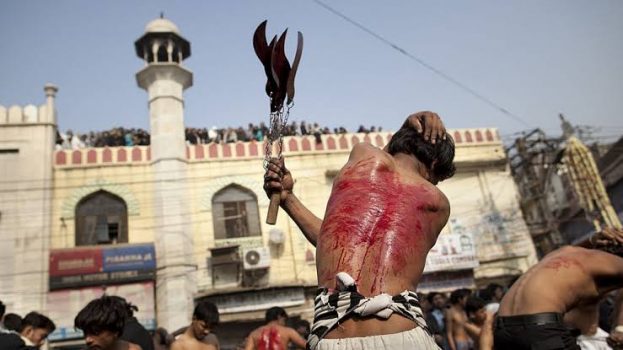 Christianity’s history is dotted with largely unsavoury practices, some of which have even survived till this millennia…

A week ago, an interesting video made the rounds. In it, two pastors were seen whipping some of their members who lay prone on the floor. Reports revealed that the pastors were testing their availability and willingness to work in the vineyard of the Lord. The members, both men and women, received gracefully the lashes on their backsides with, not uttering even a squeak. It is not clear if they passed the test or not.

Most people reacted in shock to the video, Christians inclusive. Reactions like this, while valid, make one wonder whether the average Christian is unaware that being beaten to test one’s worthiness to serve God has always been part of Christianity. Christianity’s history is dotted with largely unsavoury practices, some of which have even survived till this millennia. This practice, to others as well as to oneself, is outrageous, atavistic, cruel, and demeaning. Peter Damian, a Benedictine Christian monk, was known to impose self-flagellation on his followers. His rhetoric was that only the true followers of Christ participated in his suffering.

Self-flagellation also comes up in literature. Movie buffs would remember the scenes in the Netflix series, King of Boys, where Sola Sobowale’s character whipped herself in a bid to atone for her role in the death of her children. Also, in Dan Brown’s The Da Vinci Code, the albino assassin and monk, Silas, wore a cilice, a band with pointed spikes that bit into his ankle, causing him pain. In a separate scene, he takes stripes on his body as a part of a religious ritual.
In the early church, self-flagellation was imposed to punish erring members of the clergy and the laity. However, some members also engaged in the ritual purely as a symbolic exercise. For instance, some Mexican Catholics self-flagellate during the period of Lent to remind themselves of the sufferings of Christ on his way to Calvary.
Apart from individuals, several Christian groups, especially within the Catholic Church, had flagellation as an integral part of their identities. These societies, known as the Flagellants, although mostly existing in the shadow now, were quite prominent during the nascent age of Christianity. The Flagellants were especially active during The Black Death that ravaged Europe and Asia between 1347 and 1351. Members of the group, who left their upper bodies bare, would walk the disease-ridden streets, whipping themselves into a frenzy while invoking God’s mercy on Europe for the eradication of the plague.

Some aspects of the activities of the Flagellants carried over to the present day. For instance, a relatively popular Catholic Group, the Opus Dei, noted for its secrecy and obscure practices, encourages self-mortification to a certain degree. They have, however, stated that self-mortification should only be for a few minutes, and is not intended to draw blood, contrary to the gore depicted in Brown’s book.

The aim of flagellation is to deliberately inflict pain. Since the individual’s skin gets broken while they carry out such activities, there is the possibility of infections and wounds. Self-flagellation falls within the realms of self-harm, a phenomenon currently linked to mental distress, and requiring psychological help. In addition, flagellation has been documented to have psychological effects on the flagellant or receiver. It beats imagination that in the light of the manifested and glaring physical and psychological effects of the practice, it still exists today. As it went with animal sacrifices which were the norm in the Old Testament of the Bible, you would scarcely find Christian believers who subscribe to such flagellation today because the practice reeks of archaism, something best left in the past.

It may appear on the surface that flagellation and self-flagellation are employed for innocuous personal purposes. Flagellants and self-flagellants do not engage in it for solely religious purposes. Famous Christians have been known to self-flagellate, both as a form of discipline and a means of subduing the flesh. One of such people was Pope John Paul II. Shortly after he died in 2005, it was gathered that he sometimes whipped himself and often lay on the floor all night as part of his devotion. Similarly, Martin Luther King was rumoured to have practised self-flagellation.

Justification for flagellation is found in St. Paul’s admonition to Christians to “subdue” the flesh. 1 Corinthians 9:27 reads, “But I keep under my body, and bring it into subjection: lest that by any means, when I have preached to others, I myself should be a castaway.” Flagellants interpret this passage literally, reading the “subjection” to mean the infliction of bodily pain. The idea is that pain serves as penance for wrongs or as a vehicle that takes one to a higher plane where one can easily access God. Such an interpretation is only a deliberate twisting of the Biblical injunction.
Flagellation can and has been employed to achieve nefarious aims. For example, some Christian groups employ whipping to “cure” those suspected of homosexuality. Christian conversion therapy that employs whipping is rampant in Nigeria. In 2020, VICE, an international news outlet, ran the story of Tobi, a young gay man who had to undergo exorcism to be free from the spirit of homosexuality. For two weeks, Tobi had to endure whippings and canings which were intended to cure him. He was only let go when he pretended to be free from the “entrapments” of homosexuality.
More so, suspected witches, especially children, are the subjects of flagellation, with the whipping supposed to drive out their demons. In 2017, a child protection organization rescued three children from a church where they were being tortured. The children, suspected to be witches, had scars on their bodies from being beaten, were starved, and severally tortured. Another similar story is that of Nwanaokwo Edet whose father poured acid down his throat on the direction of his pastors. Edet who had been suspected to be a witch died from the injuries just a few weeks after. Countless stories like these abound, laying bare the problem of allowing outdated and archaic practices to thrive in the name of religious freedom.

It is remarkable the outrage the video of the pastors has generated. It goes without saying that such antiquated and barbaric practices have no place in a sane society, religious or not. However, for the Christian, there is the lesson of being awake to these erroneous doctrines and almost-fetish practices. Even now, there still remain vestiges of old and similar practices in certain Christian circles. This is a call to examine these practices in our local congregations.