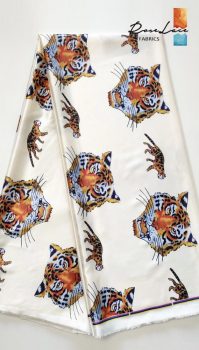 Ishiagu Fabric: How the Wrong Totem Became the Symbol of the Igbo People

The younger generation of Igbo people, and other young Africans, by extension, have the wrong notions of the linguistic and pictorial representations of many traditionally African animals…

In ancient Igbo folktales, leopards roamed the thick jungle with wiliness, strength, agility and perseverance. Other animals such as the tortoise were seen as cunning but slow. The ancients of Igbo breed agreed that the leopard (known in Igbo as “agu”) was the most elegant animal and the king of the forests.

“This was why the Igbo revered the leopard,” my uncle, Onyechege Chinaka said. “This was also why the strongest men in those days were called Ogbuagu (killer of leopards).” Leopard skin was very expensive and highly coveted. Only the very wealthy men owned them.

(Read also: How the Igbos See “Dada” and the Place of “Umu Dada” in Igbo Cosmology)

The symbolism of animal totems in Africa is quite strong and widespread. The Zulu in South Africa believe that the lion straddles two worlds. Like the Igbo, the Zulu also have a deep reverence for the leopard, but they do not necessarily see it as the king of animals. Some cultures in West Africa see the buffalo as a symbol of fertility. Among the Tiv, the eating of dog-meat is highly prohibited due to its spiritual meaning in the mythological history of Tiv people.

The Shona people in Zimbabwe have a complex totemic system that is used to identify families and kindred. Totems are often personalised in wood figures, in the strategic display of the dry skins of the totem animals in furniture or in buildings, and in its use as clothing. Many ancient African cultures have, at one point in their history, worn the skins of the animals that represent their clan.

It is not very clear when totems entered into modern fabric design. The likes of Williams Onyejekwe, an Awka-based designer, believes that it must have happened sometime in the 1940s, during colonial rule. In Igboland, the modern ishiagu cloth, with its imprint of the supposed ‘leopard-head’ did not start appearing until sometime in the 1970s. Pictures of prominent Igbo men before the seventies show them wearing mostly local flannel fabrics from Akwete and other places.

The relative newness of ishiagu fabric defies all notion of reasoning as to how it has quickly become the most recognisable fashion and cultural symbol of the Igbo people. Its wide acceptance and success is hinged on its use of the image of the ultimate Igbo totem, “agu.” Today, all over the world, ishiagu is synonymous to Igbo identity. This is all well and great for the projection of the Igbo spirit as a quintessential symbol in Africa. The truth, however, is that the ishiagu fabric, as we know it today, is an aberration, a wrong projection of a people’s identity.

The image that has persisted on the “ishiagu” fabric over the years is not a leopard head. Rather, what one sees in all the fabrics is an embossed representation of the head of a lion which has no totemic symbolism in the Igbo consciousness. “Our elders knew about lions but it was rare to see them in our enclave.

Only the great travellers of old saw them and returned to tell stories of what they had seen,” my uncle, Onyechege, said when I asked him what Igbo people thought about lions. I pointed out that many Igbo living in contemporary times will disagree. “We are forest dwellers,” he said, “There is no natural grassland in Igboland.” Leopards are forest animals while lions room the grasslands.

The truth of how the wrong totem image came to adorn the most iconic fabric of Igbo people traces back to colonial times. It reveals how European Christianity decentralised and disrupted a lot of indigenous beliefs, culture, and image-making in Africa. In the European Christian consciousness, the lion symbolises God or the totem of God.

In the Bible and in other religious texts such as the Torah, we read about the “Lion of the Tribe of Judah,” the totem of that Isreali tribe, and a physical symbol of God’s presence among them. There are instances in the Old Testament, such as with stories involving the prophet Daniel, where the lion is often shown to be a tool in the hands of God.

It is the same Jewish awareness of the power and glory of the lion as God’s totem that has permeated Africa as the first missionaries moved into the African hinterlands in the 19th century to preach the gospel. In Igboland, the combination of Christianity, western education and lack of cultural continuity has created generations of people who have become confused as to what “agu” really meant.

Favour Thompson, a banker, told me that for years, she had thought the word meant “tiger,” and that, in her mind, whenever the word, “agu,” was mentioned as an animal full of strength and agility, she usually pictured the tiger, citing her primary school readers and the Queen Primer as influences.

“I am surprised,” Anthony Nwobodo, a student of Philosophy at Nnamdi Azikiwe University, said, genuinely surprised. “I thought agu meant lion. It is even there on the ishiagu cloth.” I explained to him that it was geographically and linguistically impossible for lion to mean “agu.” The Igbo word for lion is “odum.” On the other hand, a tiger is not an African animal. According to National Geographic, tigers can only be found in Southeast Asia, parts of Northeast Asia and Siberia.

The younger generation of Igbo people, and other young Africans, by extension, have the wrong notions of the linguistic and pictorial representations of many traditionally African animals. With the Igbo, years of producing the wrong image on the ishiagu fabric has created a generation that has grown up thinking that the cultural totem of the Igbo is lion rather than the leopard.

At the Importers’ Line in Sokoto Road, Onitsha Main Market, fabric importers blamed the wrong representation on Chinese imports. “Our people are all over the factories of China, telling the Chinese to make the designs to make massive profits,” a trader, Emeka Igwilo, said. I replied that if this was the case, then it was not the fault of the Chinese manufacturers at all but that of Igbo marketers. “Everybody wants to make great profits if they have a choice in it and the ‘ishiagu’ or ‘ishiodum’ (lion-head) cloth sells,” Chikezie Nwankwo, another trader, told me as we stood in front of his shop.

(Read also: Despite Africa’s Illustrious Past, Why Are African Countries Failing?)

The idea of profit as a motivation for manufacturing and importing fabrics with the wrong cultural images seems a little far-fetched. It is important to see that the increasing African dependence on Chinese trade bear a lot of the culpability in the issue, along with the great number of people who lack full knowledge of the entire linguistic corpus of African languages, with the result that there are many Africans among the younger generations who speak English and other European languages better than their native African languages. This is partly why we find a replacement of words for African animals with European images.

There is a running danger that comes from depending entirely on foreign imports. The sad story of Africa is the absence of strong local manufacturing industries. This situation has helped foreign-developed cultures exert a strong influence on the linguistic and cultural symbols of many African tribes. The dependence speaks to the soul of Africa’s seeming helplessness in the onslaught of a neo-colonialist drive to reacquire and conquer the continent again in capitalist terms.

A lot can be said for Africa’s failing economies who should have long failed to tackle the educational and technological shortcomings of the continent; however, some blame will invariably reside with the people who have allowed negative foreign influences on their languages and culture. While the future of Africa is full of both positive and negative projections, the future of fabrics like ishiagu seems dependent on the new voices, such as Amarachi Attamah, Maazi Ogbonnaya, Chijioke Ngobili, Ebele Asonibe, and others, who are creating awareness of these wrong symbols.

Chimezie Chika’s short stories and essays have appeared in or forthcoming from, amongst other places, The Question Marker, The Shallow Tales Review, The Lagos Review, Isele Magazine, Brittle Paper, Afrocritik and Aerodrome. He is the fiction editor of Ngiga Review. His interests range from culture to history, art, literature, and the environment. You can find him on Twitter @chimeziechika1.