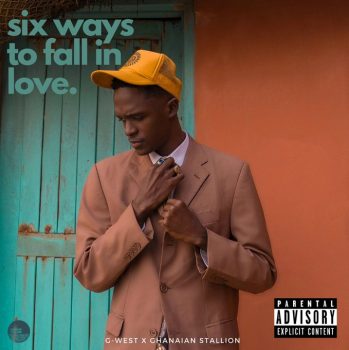 G-West and Ghanaian Stallion’s Collaborative Project, “Six Ways to Fall in Love,” is Worth Every Minute

On Six Way to Fall in Love, the duo of G-West and Ghanaian Stallion bring their age-long experiences to craft a project that would stand the test of time…

Love is a beautiful, unending mystery. Human beings are in constant search of it, and when they find it, they get burned, heartbroken; however, it doesn’t stop the search for it. Writers write about it, and poets weave words to describe the feeling.

Love has formed the dominant feature of most music genres in the world. Hardly can you find a music genre without a smidgen of love embedded in it; from self love, to love with the opposite sex, country, job and so many more.

The Ghanaian duo of burgeoning artiste, G-West, and prolific music producer, artiste and disc jockey, Ghanaian Stallion, (Black Sheriff’s “Second Sermon” producer) took it to another level with an extended play which they titled Six Ways to Fall in Love.

George Kofi Mensah popularly known as G-West is a Ghanaian songwriter and recording artiste. The Kumasi-based act’s profile has been on the rise with each music release. He has collaborated with Joey B, Bisa Kdei, Mr. Eazi, and Twitch 4ev. His 12-track debut compilation project, “Young Amakye Dede,” – a tribute to the Ghanaian Highlife legend, Amakye Dede, formally made him a tour de force in the Ghanaian music industry.

While he has been into music production for a while, Ghanaian Stallion’s recent production work with Black Sherif has brought him into stardom. With Sherif’s current wave and exposure, the German-born producer seems to be leveraging on the new-found status.

Splashed across six tracks, the themes in SWTFIL slide between love, sex and passion. G-West brought his vocals to bear on the tracks, while Ghanaian Stallion handled the production aspect.

“Salary” opens the play. There, a perky production meets mature vocal inflections. Element of sex are sprinkled on this song; however, G-West smartly suppresses it, sometime swirling to talk about emotion, money, as well as his talents. G-West is wise and indirect with his words. Ghanaian Stallion meets him at the centre with his well-arranged instrumentals.

“Knockin’” is a saxophone-led, sex-seasoned track. The opening strings, synth and drum roll ease the listener even before G-West’s words, in his Twi language, seeps in. It embraces the funky and hilarious route, the necessity of love, or, simply put, sex. From the arrangement and words flow, the urgency could be deciphered. G-West retains his maturity on this track.

G-West’s voice pierces your soul. He has his ways with melodies, ad-libs, and more essentially switching themes and properly executing them. “All Eyes on You” reinforces some elements of “Knockin’.” The saxophone retains the lead, and the background vocals are more exceptional in their output. “All Eyes on You” is a soft adulation of beauty with some nod to infatuation.

“Lingo” explores affinity, likeness, probably love. G-West is lively and excited about his new girl. According to him, she speaks his lingo, and is in tune with him. “Lingo” is filled with South African deep house subgenre Amapiano features. This is one of the tracks likely to be tailored for the club. Unlike most Amapiano songs released so far, “Lingo” is perfectly suited to serve multiple purposes. On “Goodnight,” G-West grabs his chunk of the night before he bids goodbye to his supposed lover. It’s a naughty take from a playboy to a potential playgirl. Hinged on snare drums, “Goodnight” is rather confusing. While the lyrics are soft, the instrumental is perky and chaotic. Too much was happening on the song.

SWTFIL ends on a reconciliatory note with “Come Back.” It is a message of hope to the distraught, long distance lovers, and the frequently travelled father. “Comeback” is filled with poignant messages.

Clad in a brown coat, white shirt, and a yellow cap on the extended play cover art, G-West’s contemplative demeanour shows he is in deep thought. Well, issues like love require the necessary reflection.

On Six Way to Fall in Love, the duo of G-West and Ghanaian Stallion bring their age-long experiences to craft a project that would stand the test of time. It is a concept album. It sticks to the theme, as well as touch on the relevant topics around the subject matter. These days, a concept album is difficult to pull off, and artistes run from it. Only few artistes have been able to make a good mark out of it. With this project, it is safe to say G-West and Ghanaian Stallion joined the coveted rank.