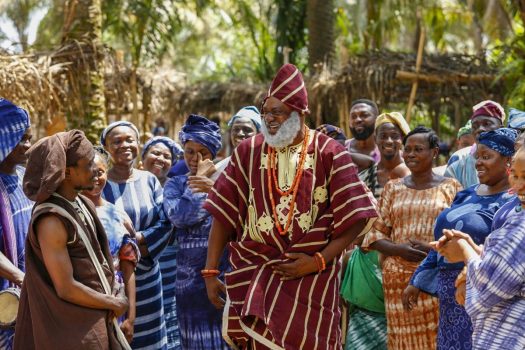 “Ẹlẹṣin Ọba” Review: Netflix’s “Death and the King’s Horseman” Adaptation Is a Play, Not Really a Film

Ẹlẹṣin Ọba’s commitment to its source material, the play, is at once a blessing and a curse. If literature is all that it is, it would be satisfactory as is. But as a film made for cinema — and streaming — Ẹlẹṣin Ọba feels restrained and too anticlimactic for its purpose…”

It has been a big year for African cultural epic cinema. I say “African” because of Hollywood’s The Woman King which was set in the pre-colonial Dahomey Kingdom (present-day Benin Republic). But it’s really been the year of the big-budget Yoruba epic, from King of Thieves to Aníkúlápó, and now Ẹlẹṣin Ọba: The King’s Horseman — all of which were on the ballot of this year’s controversial Nigerian Official Selection Committee (NOSC), a.k.a. Oscars Selection Committee. Ẹlẹṣin Ọba had high expectations. And with good reason.

First, it’s an adaptation of Wole Soyinka’s play, “Death and the King’s Horseman” which is itself based on true events that happened in colonial Oyo. Secondly, it’s another Netflix-EbonyLife collaboration, and although their combined efforts are rarely critically acclaimed, they’re usually successful. It’s also, unfortunately, the last film written and directed by the late Biyi Bandele, writer-director of the Half of a Yellow Sun adaptation and the director of EbonyLife’s debut film, Fifty. But for all its cultural importance, while Ẹlẹṣin Ọba makes sense from a literary perspective, it’s sadly underwhelming as a film.

Ẹlẹṣin Ọba recounts the story of a king’s horseman who was prevented from committing ritual suicide by British colonial authorities in 1943. Like Soyinka’s play, the film begins after the death of the Alaafin of Oyo. A text over black informs us that the king died thirty days ago and tonight, his horseman will commit ritual suicide in order to journey with the king to the afterlife. It is both the horseman’s duty and destiny, the text says, and if he fails, the king’s spirit will wander the earth and bring harm to his people.

The film opens with the eponymous Ẹlẹṣin Ọba (Odunlade Adekola) preparing himself for this journey. He’s clearly a man in love with life and determined to enjoy his last moments, so much so that on his last night, he goes ahead to marry another man’s bride (played by Omowunmi Dada) despite warnings from Iyaloja (Shaffy Bello), the leader of the market women. But as the time draws closer for Ẹlẹṣin to perform his duty, word reaches the British District Officer, Simon Pilkings (Mark Elderkin), who finds the custom barbaric and considers it his own duty to put a stop to it.

Meanwhile, Ẹlẹṣin’s son, Olunde (Deyemi Okanlawon), who has been studying to become a doctor in Britain, returns home in time to bury his father and attempts to prevent Pilkings from interfering with their culture. Needless to say, the entire affair does not end well for any of the parties. Of the three Nollywood epics this year, Bandele’s film easily stands out for the depth of its story and its literary prowess. But there was never really any competition in that regard.

It is, after all, one author’s adaptation of a play written by another author, a Nobel laureate in literature no less. Ẹlẹṣin Ọba delves into themes of duty, culture, colonialism, and the western tendency to assume their methods to be worthier than others.

It also explores Yoruba mythology on death, transition, and the connection between realms, as primarily intended by Soyinka — although, as you may have noticed, “death” is missing from the title of the film and is not centered in a way that gives it more significance than the colonial factor. From chants and praise singing to the drums and the tribal-themed score and soundtrack, music is used both as a tool of storytelling — one that feels very much like an ode to the old Nollywood soundtracks that were literal explainers of their films’ messages — and as a theme itself.

Additionally, the film employs superior stage play language in its dialogue. Plus, literary devices abound, many of them out of the mouth of the Iyaloja, from verbal irony (“I will tell the other chiefs how you showed bravery in waging war against the white man who took your side against your death”) to parables replete with metaphors (“Is it the banana that replaces the offspring?”)

All of these things, the film adopts from the play, so much so that Ẹlẹṣin Ọba delivers practically identical dialogue and an almost exact order of events, with a few exceptions for the purpose of dramatisation — just think Joke Silva and Taiwo Ajai-Lycett playing the invented parts of the “local gossips” with a few choice words that you won’t find in Soyinka’s play.

As a writer himself, Bandele clearly understood the importance of committing to the source material, and this commitment is easily the best thing about the film. But it is also — and I admit that this is one of many reasons why critics are said to be impossible to please — Ẹlẹṣin Ọba’s biggest challenge. If you take away the natural environment setting and the editing for cinema, Ẹlẹṣin Ọba is not much of a film. It’s really just a stage play captured on camera by acclaimed cinematographer Lance Gewer. Perhaps, that is the point. Maybe Bandele’s intention was to retain the stage play format.

It’s reasonable to reach that conclusion when one observes how the scenes with the natives are filmed, the wide shots that put everything onstage at once, and how similar the scenes look as if managing the locations. But this intention is negated by the more three-dimensional manner in which the British spaces are captured, with more cinematic frames. And since Ẹlẹṣin Ọba is, in fact, a film as opposed to a play, it ends up feeling like an adaptation that doesn’t really work.

Besides, whether it’s a play or a film, it’s one that manages to be colourful and still so bland. The only feeling that Ẹlẹṣin Ọba truly elicits is that of cultural pride, a function of its setting, including the local costume, the music, and the close-up shots of food and other intimate and rich cultural details. But it falls flat with any other emotion it tries to evoke.

There are multiple deaths in Ẹlẹṣin Ọba, both human and animal, but there’s barely any feeling to them. Not of pain or disgust or fear. In fact, there is a death that should shock the British characters present, but there’s no sign of shock in their dispositions. I submit two reasons for this lack of emotional substance. The first is that the film focuses only on the external conflict, specifically the conflicting duties of Ẹlẹṣin, and pays very little attention to the other forms of conflict.

You’d think that as a visual medium, the film would supply more visibility and depth to the internal battles that inform the outward choices — most of which are jarring — of its characters, but Ẹlẹṣin Ọba is almost completely devoid of internal conflicts, with the titular horseman and his son losing out the most in this regard.

We’re provided no reason to be invested in them other than our own and the film’s anti-colonialist stance. Actually, even the external conflict between Ẹlẹṣin and Olunde is left undeveloped by the screenplay, leaving narrative gaps and creating uncertainty about the nature of their relationship.

The second reason is the acting. Granted, many of the central performances are solid. Undeniably, Bello rules the screen with her natural charisma, commanding scenes with everything in her, from her posture and gestures to her expressions. And for most of the main cast, while it’s hard to shake the feeling that they could have been better because we have seen these actors do better, they all put in strong shifts, especially Adekola in the starring role.

Even musician, Olawale “Brymo” Olofooro renders an impressive portrayal of Ẹlẹṣin’s praise singer, although he is heavily underutilised. But there are a number of weaker performers that flatten out otherwise intense scenes, chief among whom are Elderkin and Jenny Stead as Pilkings and his wife, Jane.

At least, with Stead, there is the occasional spark, such as that confrontation between Olunde and Jane about the condescending ways of the colonialists. But there’s a constant drabness in Elderkin’s acting, and it’s most disappointing in that pivotal scene where Ẹlẹṣin and Pilkings engage in a heated conversation about the clash of their duties. Adekola has to carry the weight of that scene alone, a job made even harder by the distracting use of language in that particular scene.

You see, unlike the film in which the natives generally speak Yoruba, Soyinka’s play is written majorly in English, and so the conversations are generally in English. In the play, when Ẹlẹṣin and Pilkings dialogue, they literally speak the same language. Still, Soyinka indicates that Pilkings doesn’t quite understand the natives, and in one scene, Pilkings asks Iyaloja, “Must your people forever speak in riddles?” Yet, for some reason, in the film, Ẹlẹṣin and Pilkins communicate seamlessly in very different languages, the former in Yoruba and the latter in English.

There is no interpreter, and there is no indication that either character is fluent in the other’s language, especially not the British man — who continuously appears unsure, like he’s waiting for some signal that it’s time for his own lines. I expect that how a viewer digests this tricky bit will depend on their own sensibilities. Some may interpret it as a metaphor (see how far apart their languages and cultures are?) or as experimental and innovative (see how they are able to bridge the language gap?) or as a literal possibility (the British must have learned the native language of the people they colonised).

(Read also: The Importance of Literature in Nollywood Adaptations and the Need to Make More Artistic Movies)

But, again, Ẹlẹṣin Ọba is supposed to be a film, and despite the metaphysical elements of its story, the fact that it is based on events that really did happen makes it one that is grounded in reality. So do these explanations satisfactorily justify the creative choice, if indeed it was one? Is it really a metaphor for a language gap if the parties understand each other so well?

Doesn’t history disagree with the idea that the colonisers could have had such a deep understanding of the local language that they considered it to be inferior in the first place? And why experiment with an approach so inherently distracting, especially one that elevates the colonial officer to a level of care that he does not truly possess?

Ultimately, it sounds like it was just a difficult choice that was settled for because the alternative was to alter a scene so crucial to the source material and/or include some sort of translation method that would negatively affect the tension that was contained in that scene. And as nerve-racking as it turned out to be, it’s too glaring to be an oversight and is likely a deliberate creative decision.

Essentially, Ẹlẹṣin Ọba’s commitment to its source material, the play, is at once a blessing and a curse. If literature is all that it is, it would be satisfactory as is. But as a film made for cinema — and streaming —Ẹlẹṣin Ọba feels restrained and too anticlimactic for its purpose. Yet, because of its cultural relevance and for the legacy of the multi-talented Biyi Bandele, this film will not be easily forgotten.

(Ẹlẹṣin Ọba: The King’s Horseman is streaming on Netflix here.)