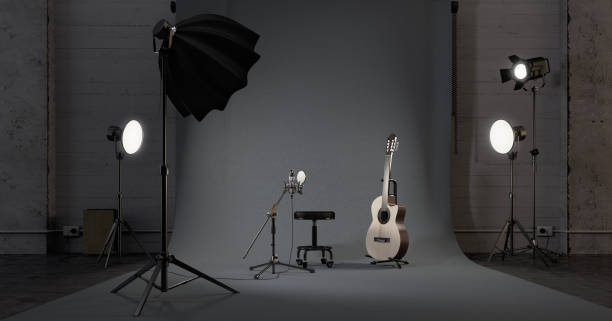 Music in film is a vital contributor to its success. It aids the free flow of the movie, allowing the audience emotional access into scenes, evoking their emotions or facilitating a smooth transition between scenes…

Have you ever imagined what a Bollywood motion picture will look like without music? A mere thought of it screams anomaly. This is because to Bollywood, music isn’t just sound attached to a movie. To them, music is the movie. In 1951, starting off with easy charm and foot-tapping rhythms, the Bollywood industry evolved, as seen in the songs of Albela that became the film’s line card, and confirmed C. Ramchandra’s grip on the popular pulse.

Indian music has become an art around which Bollywood’s film and TV productions are structured. Its peculiarity has made it stand out amongst its peers. To grow the Indian music and movie industries together, original songs of indian artists are now included in Bollywood soundtracks, featuring the likes of indie’s legendary composer, Kishore Kumar, award-winning artistes, Ajay-Atul – a duo of the Gogavale, Lata Mangeshkar, and many others who worked tirelessly to create a trend that many sense will only intensify in the coming years.

This is contrary to Hollywood, Netflix and other recent filmmakers and film production and distribution houses who are more comfortable with a soundtrack playing in the background rather than lip-synced by actors on-screen. The Indian music industry is largely dominated by Bollywood soundtracks, which account for nearly 80% of the country’s music revenue . Interestingly, this growth and economic advancement are not just about tones and melodies, but the cultural input to the dissemination of this art.

Culture is as important as the movie itself, and should not be tossed aside. The cultural beliefs and practices of a nation are what distinguish it from others, and makes the content consumable. Just as movies reflect the anxieties, norms and values of the cultures that produce them, they also help to shape and solidify a culture’s beliefs. It can be personified according to one’s ability to relate to it on a different level from others.

Making a Case for Soundtracks in Africa and America

Soundtrack stirs emotion in a movie. It follows the story and builds empathy in the minds of viewers, as seen in Sarafina. Darrell Roodt’s Sarafina is a 1992 musical drama film based on Mbongeni Ngema‘s 1987 musical of the same name. As described by SunSentinel, Sarafina is as much a political and social statement as it is a musical — a statement about the struggle for freedom amidst the sorrows inflicted through apartheid.

Delivering an exceptional story, Ngema created something that resonates with the citizens and oppressed communities in Soweto, South Africa. The movie is a fictional retelling of the 1976 Soweto Uprising, a protest against the Bantu Education system that dominated in the apartheid era, with highlights on the 1976 massacre on students. The movie grossed $7,306,242. Till today, the movie’s score continues to travel and tap into viewers’ emotions. Viewers and listeners alike can feel the tension from the voices, the passion and message passed in the soundtrack. It is almost impossible to not sing along to “Freedom is Coming Tomorrow” or dance along to the beautifully remixed Lord’s Prayer.

Although Sarafina, for some, is hard to follow because it isn’t solely focused on narrative, and the lyrics is sung with the South African Zulu language which might not be easy to understand by viewers, it is still consumable due to the melodic lines and musical delivery.

Likewise, we have Titanic, one of the best sellers of all time, as a result of its epic romance and tragic storyline. The movie is placed on the walls of time for its awesome soundtrack and score, which sets a tone and mood that channels the mind of the viewers to relate intimately to occurrences in the movie. Composer James Horner’s soundtrack for the 1997 blockbuster played a key role in the film’s phenomenal success. Similar to the movie, the music combines traditional storytelling with the application of modern elements and musical instruments, winning awards which include an Oscar for best song with Celine Dion’s “My Heart Will Go On,” and selling 26 million copies of the soundtrack. The movie made Horner the highest selling contemporary composer.

Similarly, Sound of Music is another classic, released on March 2, 1965. Although the musical, when released, had mixed critical responses, it was a commercial success, bagging its spot as the highest-grossing movie of its time, and is currently ranked the 75th greatest film ever made. Contrary to its 8.2 million USD budget, the movie grossed 2.366 billion USD. Being an all-time classic musical, there is no doubt as to the functionality of music in this film. The soundtracks written by Richard Rodger with lyrics from Oscar Hammerstein II got a sizeable number of recognition and Oscar awards for best score and soundtrack. Most of these songs became classics and paid off well because of the cultural importance attached to them.

The list goes on of movies with great soundtracks which were totally worth the investment. The budget for the soundtrack in an average Hollywood movie is about 10-15% of the total production budget, which in most cases, runs into millions of dollars.

Soundtracks and Scores in Nollywood

Music in film is a vital contributor to its success. It aids the free flow of the movie, allowing the audience emotional access into scenes, evoking their emotions or facilitating a smooth transition between scenes. However, there might be a harmful post-production effect, if the soundtrack technique isn’t properly utilised. In Nollywood, the inclusion of music in films plays a good number of roles: establishing a base setting, constructing a good atmosphere, drawing attention to vital elements in the movie, setting up a narrative from which the movie is developed, and lastly, giving account for character’s actions, interpreting their thoughts and building emotions in the viewers.

Blending a bit of Bollywood and Hollywood, Nollywood soundtracks capture both the background and lip-sync soundtrack techniques. An average Nigerian soundtrack offers a window to the storyline, and in most cases, it runs off track ahead of the movie, giving a complete narrative of the movie. All the bells and whistles kill the dramatic suspense, which is ultimately the foundation of plot development and viewers’ engagement with the movie.

There’s a protracted history between Nollywood and soundtracks. Soundtrack techniques have been adapted by movie producers in Nollywood as backtracked to 1992 when it released its first feature film titled Living in Bondage. As a young Nigerian watching a Nollywood movie, soundtracks and scores contributed heavily to my mental and psychological cinematic upbringing. For movies too complex to be digested by my young mind, the soundtrack passed the message. According to a publication in the International Journal of Applied & Basic Medical Research, on the comparative study of visuals and auditory reaction times, human auditory response time is faster than visual response time. Studies show that the response time for visual stimuli is about 180–200ms, and is about 140–160ms for auditory stimuli.

Nollywood has produced a lot of informative and entertaining movies, many of them with soundtracks that have made them memorable. Although uncommon now, soundtracks were indeed a big deal back in the 90s to about 2010, when home videos and cassettes became popular. With composers like Sammie Okposo, Stanley Okorie, Mike Nliam, and so on whose works are notable in Nollywood, music has been a beautiful part of the art created. Popular for heavy soundtracks ranging from adverts, previews and instrumentals from the full movie, Nollywood made a mark in the heart of the audience.

In view of growth, Nollywood soundtracks have evolved from loud to subtle in recent times, creating a more relaxing viewing atmosphere, clarity and better understanding. Nollywood scores have also become less predictable. Besides having relatively low production quality, Nollywood soundtracks in the 80s and 90s were written from scratch to fit in the movie plot, creating a peculiar sound identifiable across the globe, hence successfully publicising the industry internationally. Movies of note are Andy Amenechi’s The Master with its popular soundtrack, “I Go Chop Your Dollar“; Ndubuisi Okoh’s Chain Reaction with its informative soundtrack “Iyeme” (in this life you reap what you sow), both soundtracks composed by Stanley Okorie; Zeb Ejiro’s Tears in Heaven, and Died Wretched by Kenneth Nnebue, and scored by Mike Nliam.

Economic and Financial Implications of Soundtracks and Scoring

Owing to the fact that Original Soundtracks (OS) are an efficient source of additional revenue in the entertainment industry — hence the huge investment Hollywood makes in them — in the production of a movie, there is thus an agreement between the movie producer and soundtrack artiste(s). This agreement raises a mutually beneficial relationship between both parties. In many cases, especially for successful films, the soundtrack of a movie sells more than the movie itself. This is not owing to the movie’s quality, but to the notoriety, the soundtracks are able to make against the movie itself.

Original Soundtrack adds authenticity and peculiarity to film. Obvious examples are the series, Money Heist, and Game of Thrones whose soundtracks became a trend in 2021.

In recent times, Afrobeat has become a widely noted sound, and no doubt the world wants in on this honeywell. This therefore explains the increase in the African-American song fusions. Hollywood is utilising this opportunity to create lasting hits using the peculiar African sound. Nigerian musicians in collaboration with Hollywood are producing beautifully-structured soundtracks, as seen in Beyonce’s Lion King, Coming 2 America 2, and The Harder They Fall (which used Fela Kuti’s music as part of its action-themed score).

Many of these collaborations have earned these African artistes global recognition (Wizkid earned a shared Grammy win for his role in “Brown Skin Girl”).

Nollywood producers are yet to tap into this revolution. This could be as a result of negligence due to the lack of sufficient funding, mere ignorance of the benefits, the individualistic mindset in the entertainment industry, or mutual distrust on copyright and sharing between the music and movie industries.

Few years ago, most Nigerian film producers didn’t bother to pay musicians nor seek their permission before the use of their songs in the film. All this changed in 2017 after a lawsuit was filed and won by Lady Donli, a Pan-African alté artiste who discovered a 10-second input of her song “Kashe Ni” on a screenplay (name undisclosed) showing in the cinemas at that time. She went ahead to form a movement of artists to take back their rights. Motivated by Donli’s courage, Nigerian singer and songwriter, Puffy Tee hired the legal aid of an entertainment lawyer, Oyinkansola Fawehinmi, to sue for his rights to his sound used without permission in a movie. The movie which was a high grossing movie (name withheld) at that time was sued and fined 100 million naira, and later renegotiated to 4 million naira. According to Fawehinmi, “after the case, movie producers became fully aware of the need to pay for music, as well as do the thorough clearance, because the ones we fought are the trendsetters, so the others knew there was no turning back.”

These cases were a game-changer and brought in welcomed development as a more legal landscape was positioned for the music and movie industries to merge and produce mind-blowing art. This, however, is not being maximised and thus raises my question: is this a factor of cost, or will a favourably-drafted agreement close the bridge of distrust and uncertainty and build growth in the Nigerian movie and music industry?

There is an enviable relationship between the music and movie industries in other countries. The Korean K-Pop & K-Drama, Indian Bollywood & Indie Music, Hollywood, as well as the South African movie industries, are examples that are worth emulating.