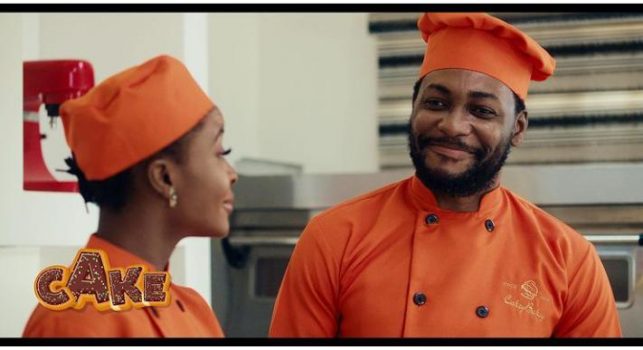 “Cake” Review: A Nollywood Culinary Rom-Com That Can’t Quite Figure Out the Right Recipe

…the many shots of delicious looking snacks and mouth-watering cakes will make it difficult for you to not dash to the nearest pastry shop immediately after seeing this movie. Yet, for a culinary movie, Cake does not satisfy all the necessary cravings…

There is a running joke amongst Nigerians that the question “Have you eaten?” is a synonym for “I love you.” Of course, there are people who get irritated by the question, especially when it is asked too often and never accompanied or followed by an offer to feed the person to whom the question is directed. Yet, there is no denying that food and love are very closely linked, so much that it has been posited that food is a love language. The last time a culinary-themed romantic drama graced the Nollywood big screen, it was the beautiful AMAA-nominated, Kayode Kasum-directed film, This Lady Called Life (2020). This time, Prosper Edesiri serves up Cake, his debut feature film, released in cinemas in February, 2022.

In Cake, a talented baker, Tomiwa, played by Tope Tedela, has just opened a new bakery which he calls Cakey Bakey. He runs it with the help of two of his employees, Mfon (Folu Storms) and Jimoh (Koloman). Tomiwa’s late mother (Patience Ozokwor) provided a large chunk of the funds for the bakery, so making her proud is Tomiwa’s top priority. On New Year’s Eve, as he watches the fireworks, he makes a promise to his late mother. Before the end of the year, he will marry the girl of his dreams and settle down, as his mother has always wanted. Like an answer that has been waiting eagerly for a prayer to claim it, the beautiful Charlya Walshak (Sophie Alakija) walks into Cakey Bakey as the first customer on New Year’s Day. Tomiwa is immediately smitten and sure he has found his wife. But before he can make his feelings known to her, a steep challenge presents itself. Charlya is newly engaged to be married. Tomiwa’s solution is to win her over with the perfect cake, with a new recipe to be named after her.

While Tomiwa obsesses over Charlya and the Charlya Cake, Mfon keeps the bakery going. When his obsession leads him to make questionable decisions, it is Mfon who is there to bail him out, literally and figuratively. Even from the opening scene, it is clear that Tomiwa is not the best at customer service, and without Mfon, he would be lost. She makes him better, and she’s ever ready to jump to his rescue. There is never a moment when her feelings for Tomiwa are not obvious. We can see it. Even Jimoh, who is often clueless, can see it. If only Tomiwa could see it, too. 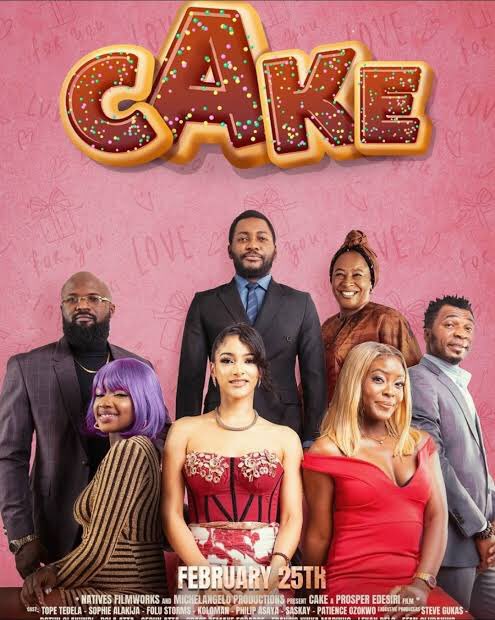 But for the beauty and temptations of pastries and a few other high points, Cake would be as lost as its lead character. This movie is produced by Steve Gukas’ Natives Filmworks, and Michelangelo Productions, both of which were part of the team responsible for 93 Days (2016) and Living in Bondage: Breaking Free (2019), so the movie’s decent budget is clear on the face of it. One look at the infrastructure that is Cakey Bakey tells you that Tomiwa is not a low-budget baker, and neither is the movie a low-budget movie. There is a lot of tidiness and beauty on display from scene to scene, giving the eyes a lot to feed on. And the many shots of delicious looking snacks and mouth-watering cakes will make it difficult for you to not dash to the nearest pastry shop immediately after seeing this movie. Yet, for a culinary movie, Cake does not satisfy all the necessary cravings.

The appeal of food-themed movies comes from so much more than just looking at food in all its glory on the screen. There’s something exciting about watching a chef or a baker create magic in the kitchen or bakery. Watching people eat food is a special kind of temptation. And watching people talk about food can be very interesting and insightful. These other aspects were well understood by This Lady Called Life whose central characters were undeniably in love with food. But in Cake, apart from Charlya and her fiancé (played by Philip Asaya), the only important customers as far as the movie and its head baker are concerned, nobody is really excited about anything that is made in Cakey Bakey. If Tomiwa, himself, has any passion for baking, it is totally overshadowed by his obsession with Charlya. If Mfon has any care for pastries, it is difficult to see it when she seems to only dedicate herself to the bakery because of her feelings for Tomiwa. And although Jimoh steals snacks ever so often that he appears to love food, it feels like more of gluttony than love since we rarely observe him actually enjoy the snacks he steals.

Just as the characters don’t have nearly enough chemistry with food, there is also a stark lack of chemistry among the characters themselves. This is a movie about a love triangle where almost nobody has their love reciprocated, so it makes sense that there would be little to no sexual tension. But, with the exception of Jimoh and Mfon who are comfortable together as co-workers with a love-hate relationship, there is too often some emotional distance even among non-romantic peers, a problem that can be traced back to Tedela. It has been revealed that the actor took baking classes to play Tomiwa, and he does seem to know what he’s doing as a baker. Perhaps, he would have had a better performance overall if there was enough of him actually whipping up baking delights throughout the movie. Unfortunately, the screenplay, written by Ronke Gbede, makes his character spend too much time brooding over an unrequited love.

Tedela might be able to handle unpasteurised milk and work an oven (which are about the most remarkable aspects of baking portrayed), but in this movie, he often appears uncomfortable or stiff around other actors, making it difficult for his onscreen partners to flow with him. It takes two to tango, and even Folu Storms, who plays the patient, unseen admirer to a tee, cannot single-handedly build the much-needed chemistry between her and Tedela, whether as friends, co-workers or potential lovers. In fact, other than when he is on his own trying to figure out the Charlya Cake recipe, Tedela is only at ease when his character, Tomiwa, is talking to his late mother who is physically absent, with those scenes adding an extra layer of warmth and some colour to his otherwise Charlya-centred life.

Despite its many flaws, the movie is certainly not a waste of time or effort. In foreign climes, very many movies have exploited the relationship between love and food. From Hollywood classics like Big Night (1996), and Julie and Julia (2009) to Korean dramas like Temperature of Love (2017), and Work of Love (2018), food has been a readily available device for the furthering or, in some cases, hampering of romance. When it comes to Nollywood, even though food is regarded as a love language in Nigeria, food is often used in a more insidious manner. The most popular use of food in Nigerian movies is, perhaps, for the function of initiating characters, especially children, into witchcraft or cult groups. The food and love dynamic, itself, often comes into play only as a means of delivering a cautionary tale on love potions. Even recently, in the impressive anthology film, Juju Stories, which portrayed Nigerian urban legends, two of that movie’s stories, titled “Yam” and “Love Potion,” used food and drink, respectively, to portray the concept of charms in contemporary Nigeria. But with This Lady Called Life and Cake, it appears that there is a growing recognition of food as capable of stoking genuine love. And that, on its own, is progress that Cake deserves appreciation for. 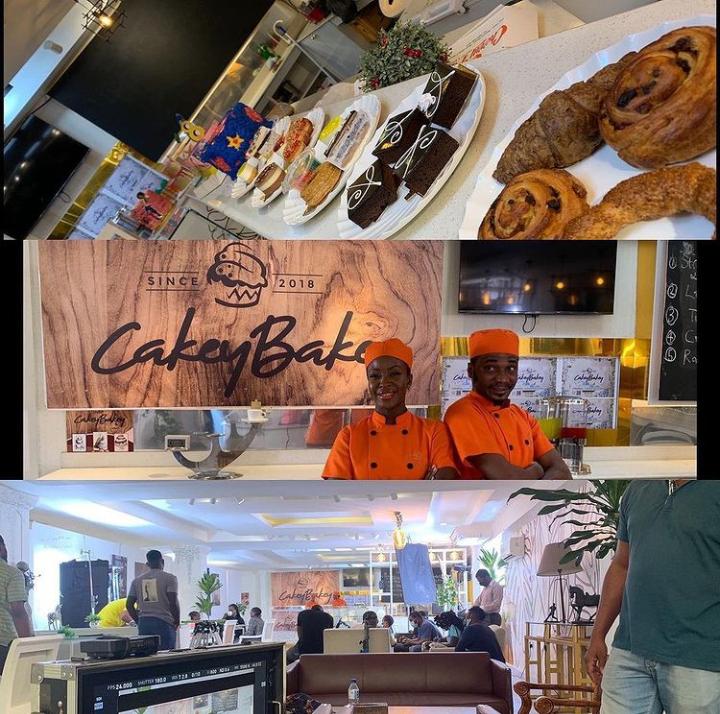 The movie, thus, is not an unpleasant watch. It might not be thoroughly exciting, but it does have its moments. It helps that the soundtrack blends well with the scenes and moves from upbeat to warm as necessary. There are also a few decent laughs. But with a thin and heavily repetitive plot in the form of a love triangle going in circles, a protagonist that’s difficult to like, and a love interest that deserves so much more than she ultimately gets, Cake falls instead of rising to the occasion. And like its leading man, the movie can’t quite figure out the right recipe.

Vivian Nneka Nwajiaku, a film critic, writer and lawyer, currently writes from Uyo. Connect with her on Twitter @Nneka_Viv and Instagram @¬_vivian.nneka