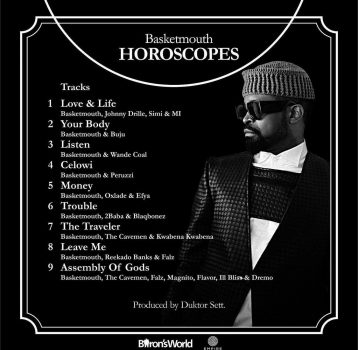 If Yabasi was the preface, then, Horoscopes should be regarded as the triumphant foreword to Basketmouth’s thriving, encompassing and innovative music book.

African comedy merchant, Basketmouth, made a return, two weeks ago, with his long-awaited second project which he tagged Horoscopes.

Bright Okpocha’s first love was rap music. While schooling at the University of Benin for his first degree, he formed a group called “Da Psychophats” which had seven members. They started going for shows and rapping in 1995. However, they broke up before releasing any material. He went on to form another rap group known as “Da Oddz” with his brother Godwin and Muyiwa Ola-Phillips. Just like the first group, they also failed to release any project before they disbanded.

With apparently no headway in music, Basketmouth switched to comedy. Two decades later, he has conquered the industry, signed endorsement deals, hosted shows, won accolades and struts event centers across the world. In the wave of the 2020 pandemic, he made a return to music with an executively-produced compilation track for his comedy sitcom Papa Benji.

The album titled Yabasi (Onion) contained tracks like “Myself,” “World People,” with artists like Peruzzi, Oxlade, Duncan Mighty, Ladipoe, Show Dem Camp all coming with their A-game. If anybody was in doubt about Basketmouth’s expertise, Yabasi obliterated such thoughts.

Through Yabasi, Basketmouth got a triumphant welcome back into the music industry. He also won some new school audience over, and in some way, got the needed validation from music critics and fans. Eight years before Yabasi, Basketmouth attempted a music comeback via Eldee the Don and Wizkid’s assisted track “Where You Dey.” Just like some experiments, the single failed to elicit much traction from the fans.

The Cavemen., Oxlade, Peruzzi, Illbliss, and Flavour all made a return on this album, with Flavour appearing on two tracks.

With the world still battling a short attention span, Basketmouth, smartly, made this album concise, thereby aiding the replay value of the project. At just 25 minutes, the fans couldn’t have asked for more.

Johnny Drille, Simi, and MI Abaga open the album with the guitar, synth-spiced “Love & Life.” Johnny Drille and Simi’s back and forth on strains of hurt in relationship got flanked by MI Abaga’s cadence-like rap verse. While the album started on a sad note, MI doused the tension with his lewd and comic lines: Yeah/ She no want stone-cold/Keep her with love, on code/You get man?/ Don’t worry/Don’t wanna know/ I get bottle and get smoke for when you show.

BNXN’s seamless flow seeps in on “Your Body.” While it’s obvious BNXN is trying to speak his truth on the place of sex in a relationship, he is careful not to hurt the girl. BNXN’s delivery is bound to drive you to the dance floor.

“It took me two years to get Black Diamond, but you’ll agree it was worth the wait,” Basket Mouth revealed via an Instagram post on the hassle he underwent before he could get Wande Coal on this record. “Listen” is sonorous and heart-filled, a revelation on Wande Coal’s journey as well as the tribulations he encountered before he got to this stage. The message might get lost on the listeners, blame it on Wande Coal’s sweet voice. The follow-up track, “Celowi,” featured Peruzzi. Wande Coal and Peruzzi share almost the same vocal range, and so the vocals on both songs can be confusing. “Celowi” is a patwa-inflected tune that celebrates a woman’s backside.

Ghana and Nigeria might be involved in needless friction, however, this has not stopped artists from both sides from coming together to craft joints for the listening pleasure of the fans. On “Money,” Oxlade and Efya jointly bounce on each other’s energy on the impact of money in decision making. Efya’s verse might have come late but it still felt relatable and stood her ground in the whole scheme.

From “Myself,” off the Yabasi album which featured Oxlade and Show Dem Camp, and now to “Trouble,” featuring 2baba and Blaqbonez, Basketmouth fuses the new school with the old school. So far, the effort always birthed awesome tracks. 2baba and Blaqbonez are an unusual duo, but their track “Trouble,” says otherwise. The chemistry comes off well. 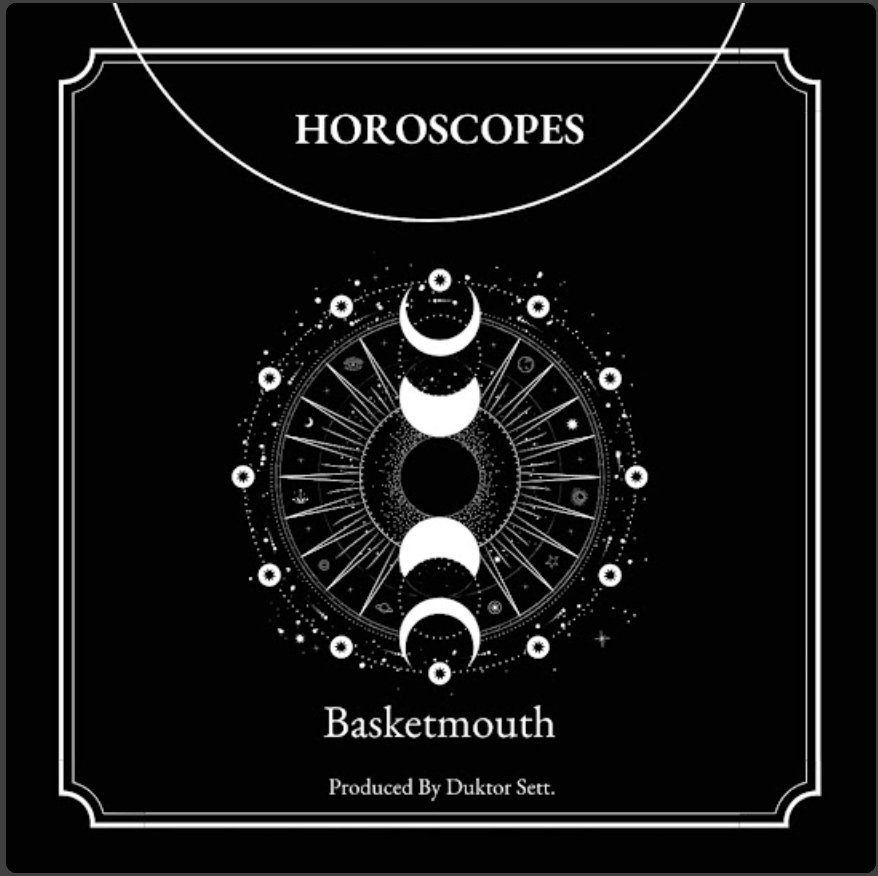 The modern Highlife duo, The Cavemen. are known for their philosophical, meditative takes on issues which they brought to play on “The Traveller,” a wise and calm take on life and its other intricacies, with input from Ghanaian Kwabena Kwabena.

Falz and Reekado Banks come through on the filler track “Leave Me.” The longest (4:13) track on the album “Assembly of Gods,” ends the project with Basketmouth enlisting all the three major ethnic groups for a musical journey. Falz and Dremo represent Yoruba, Magnito filled in for Hausa, while Flavour Nabania, Illbliss, and The Cavemen. strut with the Igbo insignia. While this writer was listening to the album, he put the track on repeat. In a way, Basketmouth placed the track in such a way that it wouldn’t give listeners the feeling that it was the last track. The track was also awesomely executed.

If Yabasi was the preface, then, Horoscopes should be regarded as the triumphant foreword to Basketmouth’s thriving, encompassing and innovative music book.

Horoscopes thrives on its pristine link-up artists as engineered by Basketmouth, helmed by Duktor Sett who produced all the tracks. This collaboration was done in such a way that all the featured artists come with their best foot. For the listeners of Yabasi, it is safe to say that we have a successor for the album. Basketmouth gets better with each output and it makes you wonder why he hasn’t thought of returning to his first love until now.

Emmanuel Daraloye is a music critic with over 300 album reviews in his archive. His bylines have appeared in The Cable Newspaper, The Lagos Review, Vanguard Newspaper, Legit News, Rank Magazine, Modern Ghana Web, Nigerian Tribune, and others.