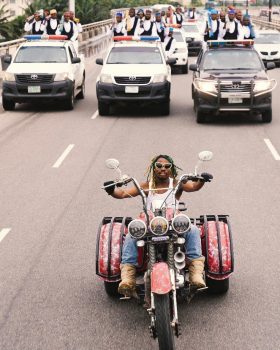 It seems as though an artistic chemistry exists between Asake and Omori as Asake’s songs seem to always bring out a different and unique creative side to Omori, and vice versa…

“One good thing about music, when it hits you, you feel no pain.” This famous quote by Bob Marley elucidates completely Asake’s present industry state of affairs.

YBNL’s newest inductee and current cash cow, Asake, has recently been on a supernatural wave, commanding staggering numbers with both his visuals and audio releases since he made his grand entry into the music scene with his hit song, “Omo Ope.”

The major factor(s) responsible for these unparalleled levels of success the singer has attained in such a short time remain a mystery to many, and has left some wondering what the secret behind his success really is. Is it his contagious energy, or his theatrical performance? Or could it just be down to sheer hard work and luck which, in many cases, have proven to be the ultimate ingredients needed to have a successful career in the music business?

The “Palazzo” crooner’s achievement, however, does not come as a surprise to some, as many fans are of the opinion that there’s always a higher possibility for new artistes to succeed when they are being mentored and guided by established and highly-decorated artistes such as, in Asake’s case, YBNL boss, Olamide. A comparison almost similar to this is the case of a soccer player being coached or mentored by Lionel Messi or Christiano Ronaldo.

How often do we get to see new artistes emerge seemingly out of nowhere and then instantly dominate the scene, exerting a firm grip on the game like it was their inherent birthright? The “Sungba” crooner who is also known as Mr. Money, has surprised many including myself by the unreal and inconceivable standards to which he is taking his artistry to.

Asake’s latest release, “Peace Be Unto You” (PBUY) is a common phrase often used between two individuals or parties in many quarters in Nigeria to express a sudden disinterest or unwillingness to continue in a particular line of conversation. It is an alternative way of saying, “Na you sabi” or “Do/believe whatever you like.” The song is another thunderbolt from the green-golden-haired dreadlock star. It was produced, mixed and mastered by Magicsticks, and co-written by label boss, Olamide.

TG Omori directs the visuals for this blazing tune as well. It’s almost becoming a tradition between these two (Asake and Omori) that whenever Asake drops a song, one can immediately guess who the director of the visuals would be.

The “PBUY” video is another testament to Omori’s wizardry, making it the fourth video project that both creatives have worked together on. It seems as though an artistic chemistry exists between Asake and Omori as Asake’s songs seem to always bring out a different and unique creative side to Omori, and vice versa.

The video starts off with Asake driving hurriedly through a Lagos bridge on a Harley cruiser bike, escorted by a convoy, giving the impression that he and his gang are headed somewhere to wreak havoc. The audio extracted from a viral clip of a hysterical female police officer screaming “help me” as she was being carted away by a driver was sampled in the beginning of the song as well. I thought that was very cheeky, yet creative. It illustrates exactly the kind of effect Asake’s music has on his fans.

The opening scene is immediately reminiscent of the action series “Sons of Anarchy,” and how the frat brothers in the series would often storm a particular location on their cruiser bikes and in their numbers, sending inhabitants of that particular environment into a frenzy and taking cover.

Camera angles and movements is where Omori earns his money, and at 1:22 playtime, viewers witness what I’d like to call a masterful and ridiculous show off. As Asake sang the lines “Emiliano rora ko sha ma rora Iwo nikan ni Burna,” he places his hands on his agitated lover’s face, and she immediately feels a sense of calmness and peace, almost as if the singer had touched her weak spot. I doubt if the camera movements in this particular scene has ever been witnessed before in Nigerian music video filmmaking. It could almost be compared to a magician conjuring magic with the lenses. I enjoyed it so much that I had to rewind it multiple times. The vixen’s acting was also amazing, and she complemented Asake’s energy on set. The medium-shot of her placing her hands on her waist, walking and looking confused at 1:28 playtime was perhaps my best shot of the entire video.

Asake once again comes through with some sleek clothing in this video. The mauve-coloured three-piece suit he wore on set was absolutely brilliant; so was the burgundy cardigan and brown pant trousers he wore at the library scene. Kudos to the costumier, or whoever was responsible for selecting those particular outfits.

In what looks like a rage-room for Asake’s lover, the vixen is seen smashing a guitar on the floor. At exactly 1:22 playtime, Omori takes an extreme close-up shot of Asake’s face smiling and showing his full set of grills. This shot is perhaps one of the cleanest and glossiest shots you’ll ever see in a Nigerian or African music video. I was left completely blown away by some of the angles and camera movements I had been privileged to watch.

The ending of the video shows Asake standing on a gigantic monument with a giant clock crested on it. Omori dazzles with the drone camera, taking some long shots and then tilting and dollying the drone camera in and around the singer. I couldn’t help but wonder how the director was able to persuade the singer to get on an edifice that looked over 200 feet high, and how he was he was able to bring him down from there. Could it possibly have been just a CGI trick? I found it very difficult to tell. Either way, it was a brilliant video.

Omowale Michael Bokinni is a trained cinematographer and screenwriter. He is an alumnus of the prestigious Royal Arts Academy, Lagos. He is passionate about all things music, movies and entertainment in general. Instagram @omowalebokinni. Twitter: @bokinnio.

Asake Olamide Peace Be Unto You TG Omori