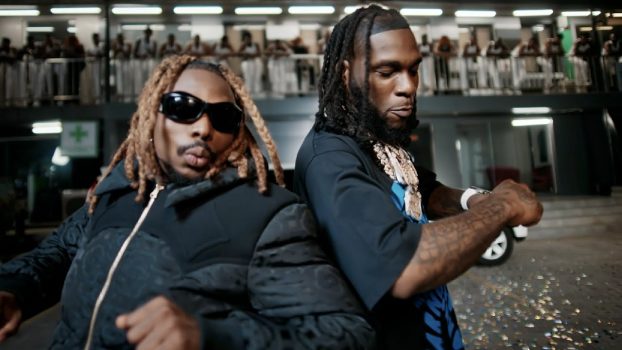 …it is imperative for new artistes to always give it their best shot whenever the opportunity presents itself for them to exhibit or showcase their talents. And that is exactly what Asake has been doing since his arrival: giving it his best shot…

Afrobeats’ current musical sensation, Asake, also known as “Ololade Mr. money” is currently trending with consecutive hits. The singer took the Nigerian music industry by storm with the release of his song titled “Omo Ope.” Early this year, the track  spread quickly across the country like wildfire, peaking at number one on various Nigerian music charts, announcing Asake as the new hot kid on the block. The Olamide-owned YBNL signee followed it up almost immediately with another non-mover titled “Sungba,” a Yoruba word that means to “lie down flat.” The Magic Sticks-produced track quickly became an instant hit, making it two in a row for the singer. Asake then decided to do a remix of the song, this time with Grammy award-winning artiste, Burna Boy.

The track is currently enjoying massive television and radio air play, and the video is presently at number one on MTV Base Top 10 Naija and also at number 2 on YouTube’s trending music videos.

There is always a shade of skepticism surrounding the emergence of  new artistes in the  Nigerian music scene. Questions are asked immediately of them. Are they the real deal, or are they just another one hit wonder? Usually, an upcoming artiste has a slim shot at impressing the listeners or would-be fans, and if  they miss or fail, it’s going to be a long, lonely and arduous road back to convincing the listeners or potential fans into giving them another audience. This is why it is imperative for new artistes to always give it their best shot whenever the opportunity presents itself for them to exhibit or showcase their talents. And that is exactly what Asake has been doing since his arrival: giving it his best shot.

The hitmaker has made his intentions clearly known with the release of two consecutive hit records already under his belt, that he does not wish to remain an upcoming artiste for too long.

For the video of “Sungba,” Asake hired the services of ace video director, TG Omori,  (a service that doesn’t come cheap) for the second time in a row. Asake is fast gaining a reputation for always showing off wads of cash in his music videos, making it a signature. He  continued in similar fashion in this video for “Sungba” remix, fully representing his monicker as Mr. money. The video had it all; from money confetti, to street ambience, to beautiful glamour models dressed in seductive lingeries. There was also a cameo appearance of industry socialite, Rahman Jago,  hrilling viewers with the “virus dance” moves. TG Omori also captured a little banter going on between Asake and Burna Boy. The “Omo Ope” crooner’s fashion style was very well defined in this video, which is something we didn’t see much of in his previous videos. From the first half of the video Asake was dressed in a vintage shirt and burgundy trousers. In between scenes he wore the matching burgundy suit to complement the pant trousers.

For some of the millennials like myself, ardent music lovers, we grew up in the era when Nigerian artistes and  video directors would continually sulk and complain about locations in Nigeria not being readily available for video shoots and that Nigeria’s atmospheric conditions were not favourable to film in. These artistes were able to convince the labels that they would have to be flown abroad to shoot a music video. This meant incurring additional expenses on the label or financial sponsors responsible for financing the travel logistics. Back in the day, PSquare shot a number of videos for their hits abroad. “Temptation” and “Beautiful Onyinye” are good examples. However, this new generation of artistes and music video directors see no limits. They have been able to portray creatively Nigeria’s beautiful scenery in Nigeria. . TG Omori is currently in pole position leading the charge as one of the directors adept at bringing out the best in cinematography regardless of location. This video ran for a playtime of three minutes and thirty-six seconds, and it was all intriguing till the end with a lot of exciting scenes in it. Some of my favourite scenes and shots taken by the director was the powerboats scene where Asake sat on one of the boats and performed alongside some of his cloned compadres, all seated while imitating the singer.

The “Cold Outside” video director took a superb wide angle shot of the singer and his clones, and also took some medium shots of Asake alone as well, depicting the singer in a more relaxed mood while he enjoyed the beautiful view of the ocean. Another one of favourite scenes was towards the end of the video where Asake and Burna Boy danced while facing each other. There, Omori took a full two-shot of the pair but also was able to capture what was going on in the background upstairs behind the pair where, interestingly, a group of people dressed in all-white outfits stood on the balcony.

Lighting setup could sometimes prove to be the deciding factor in a film. The clarity of an image in a film is mostly reliant on the lighting setup involved, and that is why gaffers who know their onions are highly-respected in the industry, especially on sets of music videos. TG Omori’s team of gaffers are doing an exceptional job for him by making his videos clean, shiny and glossy, fully complementing his camera handling and directorial skills. The background lighting was so close to perfection in the scene where Omori introduced Burna Boy with a close-up shot as he sang his opening line.  The gaffer made use of both Led lights and tungsten bulbs to retain the natural atmospheric feel of the night, as well as reflect the moonlight on set. Another shot I was impressed with was that taken at the beginning where Asake sat in a living room singing, and then suddenly a stack of cash was thrown at him and he caught it with great reflex. It was similar to what the director did with Blaqbonez in his “Commander” video where the camera catches the rapper catching his fallen award plaque. This catch was however captured more passively than that in “Commander.”

Asake and the entire team at YBNL and Empire are doing a wonderful job with the direction the artiste is headed. Overall, the video was amazing. Although when compared to the initial video for the original song, the latter had more exciting shots.  However, in terms of picture clarity and costuming, this second video comes top. Asake who has only been in the spotlight for a few months is working tirelessly, and it is evident. From the reception he has been getting, I expect we will be seeing more of him  again, soon.

Omowale Michael Bokinni is a trained Cinematographer and Screenwriter. He is an alumnus of the prestigious Royal Arts Academy Lagos. Passionate about all things music, movies and entertainment in general. He is also an actor who has featured in a number of Nollywood movies. Most recent; The Royal Arts blockbuster “Bitter Pill.” Instagram @omowalebokknni. Twitter @bokinnio.