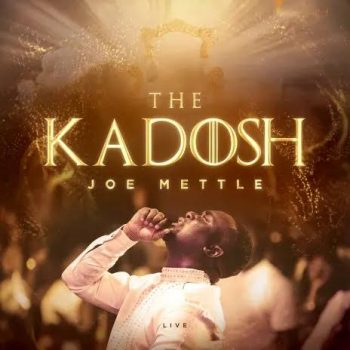 The Kadosh is Joe Mettle’s seventh album, and it stands as a proof of Mettle’s progress and growth in the Gospel music industry…

For Joseph Oscar Nii Armah Mettle, popularly known as Joe Mettle, every album has proven to be an enlivening display of prowess in songwriting and vocal production. Ornamented with a unique combination of beats, superb lyricism and great voicing which makes for a profound album, Joe Mettle has released an eleven-track live album titled The Kadosh. The titular track, “Kadosh,” has become an anthem in many church gatherings since the album was released.  Recognised as one of the most successful Ghanaian Gospel artistes, the award-winning singer is known for his peculiar meld of passionate worship melodies which often comes with reverbing, high-pitched vocals that effortlessly storm the emotions and spirit of listeners.

Characterised by Afrobeats, this album is a brilliant work that shows hard work in rehearsal, meditation, and prayers. All eleven songs on The Kadosh were written to affirm the greatness of God’s holiness and power. In the track, “The Word,” Mettle explains that the title of the album means “holy.” He further establishes that God who is holy dwells in believers and makes them holy.

The first track, “The Word,” starts with Mettle delivering a session of deep exhortation to the live audience. Just like the name of this track, the over 4-minute long track runs over a fine combination of Mettle’s voice, embroidered with soft piano chords as he delivers the word of God. From start to finish, Mettle goes on and on about the greatness and the might of God. With imagination-imposing and praise-generating expressions, he describes in fine detail God’s holiness that takes away the filth of men.

The titular track, “Kadosh,” starts with guitar percussion, and a blend of the floor tom, mid-tom and piano chords. Mettle’s voice takes over, singing quotable and memorable lines that say “Kadosh, Kadosh, is the lamb of God who sits upon the throne. He alone is worthy of our praise.”  Here, Mettle calls God Kadosh, a Hebrew word for holy, and acknowledges that God is deserving of praise. The line is later embellished with a chant that lasts throughout the entire track. The melodies of this track are capable of seeping through the pores of a listener’s heart. Despite the fact that the song is mid-paced, it is danceable.

(Read also: Joe Praize’s The Assignment album is Covered with the Cloak of Excellence)

“No other God” is a song that exalts God above everything else. Here, Mettle confesses that he has no other god besides God, and he will always worship God. This rendition starts with a lush of harmonies from the piano, jazz drums, the bass guitar and the lead guitar. The polished texture of the voice of the backup singers, and how they neatly transition between minors, glows with brilliance.

In “Among the Gods,” Mettle does a sample of the old, familiar, song that resounds in most Christian homes. The song which says, “who is like unto thee, among the gods who is like thee? Glorious in holiness, fearful in praise, doing wonders, hallelujah,” is well combined with a vamp, “among the gods,” which is repeated until the song ends. This album goes beyond creating a nostalgic feeling to drawing the heart to a place of true worship.

“Great Jehovah” is a fusion of Afrobeats that gets better with repeated play. The song starts with loud sounds from the conga drum, a sudden intrusion of the snare drum, garnished with guitar percussion, and piano chords. This track speaks of the things that God is capable of. In a call and response verse, Mettle acknowledges God as one who can do all things.

In “I Trust in You,” Mettle declares his absolute trust in God and God’s abilities. With energetic vocals, Mettle  soars above subtle piano scales with a fine collaboration from the electric guitar. The song is a combination of soaring harmonies and poignant lyricism. With a subtle crescendo effect, the backup singers do the verses as Mettle chants and speaks in tongues.

“New Hallelujah” is another Afrobeats-infused track on this album. Led by the lead guitar, the instrumental is an intriguing blend of beats from the conga drums, trumpet, jazz drums, bass guitar, and the piano. The repeated modulations led by the trumpet give the song a feel that makes the beat more enjoyable and danceable.

“I Can’t Stop Praising” is another praise song on the album. Here, Mettle speaks of his inability to stop praising God because of God’s goodness and mercy. This track comes with a magic dust that compels bodily movement in listeners. The voice of popular Nigerian Gospel artiste, Eben, takes the song to a whole new level. This song and many other Gospel praise records such as Limoblaze’s new album, Sunday in Lagos, has shifted African Gospel to a whole new level of contemporary music.

Another song that rides on the wings of spiritual depth on The Kadosh album is “Songs of Gratitude.” This track is a medley of different choruses, and it was done primarily to stir up an atmosphere of worship in the live audience. The song, which happens to be the longest of the tracks, comes with a soulful effect. The live audience was thrown into a heartfelt session of meditation and worship as Mettle sang from one chorus to another.

Ever heard a reprised song that sounded better than when it was first sung? “I Trust in You” was sung twice on this album. This time, it was done solemnly and spontaneously. This conscious rendition gets intense as Mettle’s voice and that of British/Ghanaian songwriter, Niiella, readily drags the souls of the audience into the shores of God’s presence. “I Trust in You” fleshes out the vocal abilities of Mettle as each landing note was decorated with smooth riffs and runs.

“Wo Ye Mame” is a song done in the Twi language. The track affirms the preservation that comes from God’s mercy and goodness. Here, Mettle wonders where he would have been if God’s mercy had not shown up for him. Like every song on The Kadosh, this Twi rendition is accompanied by a refined instrumental.

The Kadosh is Joe Mettle’s seventh album, and it stands as a proof of Mettle’s progress and growth in the Gospel music industry. One spectacular feature that comes with this album is the assuredness that resounds in Mettle’s voice as he sings the lyrics. When he sings about God’s holiness, more than ever before, a listener is convinced that God, indeed, is holy. The rhythm and beats of nearly all the songs are mixed so well that there’s every tendency for a listener to get drowned in the beat and forget the lyrics, a struggle that comes with most danceable songs.

Live performances, like those in The Kadosh, always come with the tussle of timing, especially with an active audience. One of the tracks, Songs of Gratitude, the longest track on the album, lasts for 16 minutes.  A lengthy song is usually accompanied by the need to keep the average listener glued to the music. Many of the Gospel albums that were recorded live in 2022 had issues of very long songs. In Victoria Orenze’s recent album, Truth in Sounds, one of the songs, “Promises,” was 19-minutes long. So also Dunsin Oyekan’s The Glory Experience, with songs that are about 12 minutes long. Brevity of songs usually increases the desire for repeated play. One way overshooting can be avoided is to allocate time to each session before recording commences.

The songs on The Kadosh are tailored to establish people’s faith in God’s abilities. The songs come with raw passion, and will be enjoyed by lovers of Gospel music.