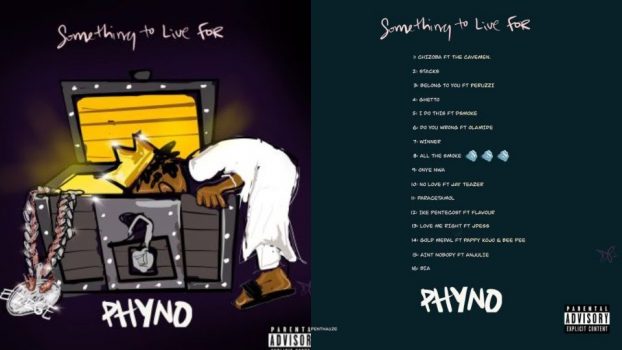 “Something to Live For” Adds Little to Phyno’s Reputation

Phyno’s fans deserve something better than this in a project grandly titled “Something to Live For.“

Across Phyno’s discography of four albums, “Something to Live For” ranks the least for its lack of innovation and newness. In the end, the project adds nothing to his musical reputation.

What Phyno has done in rap with the Igbo language in the last decade is remarkable. With his first album, “No Guts, No Glory,” Phyno put himself on the map of Nigerian rappers who are a force to reckon with in Africa. Over what has amounted to almost a decade, Phyno has built on that reputation with his previous two albums, “Playmaker” and “Deal With it.”

The Enugu-born rapper has come to be known for his unique brand of indigenous rap, a conversational style which combines dishing out punch lines with impressive rap schemes, surprising word play, and a good aptitude for story telling that is sometimes inspiring. Over the years, it would also seem that he has experimented with quite a number of sounds in the pop sphere and Highlife.

Over his first three albums, Phyno raps about women, money, growing up in the ghetto, , partying, and little on social consciousness. These topics have been repetitive, but an intelligent artist always finds a way to talk about everything in newer ways. The album, “Something to Live for” is similar, thematically, to what Phyno has always sang about, and he does not succeed in innovation or raising his game higher with this album.

There are 17 songs in the album. The first on the track list is “Chizoba” (ft. The Cavemen.), an Igbo word meaning roughly, “May God continue to save us.” The Cavemen., being one of the most innovative acts of indigenous music, gives the song a unique course of its own, with a beautiful chorus, only heard at the beginning of the track, after which Phyno goes on a rap tirade spanning several minutes.

The rap, mostly in Igbo, has a number of good punch lines, and naturally makes the listener expect to listen to an album full of many more such songs. In the songs, Phyno raps, “Chukwu e debe go m na frontline/ kita ihe na-enye m nri bu punchline…” (God has put me in the frontline/ now what gives me money is punch line). But the album unfolds with far less punch lines than one would expect of a project that begins with such a song, or even from a rapper of Phyno’s caliber. After the first two songs in the album, (“Chizoba,” and “Stacks”), there are hardly any other exceptional songs between the remaining fifteen tracks.

An exception could be made for songs like “I Do This” (ft. D Smoke), “No Love” (ft Jay Teazer) which seems like the polar opposite of Wizkid’s “No Stress”; Love Me Right, (ft. J’ Dess) “Gold Medal” (ft. Pappy Kojo, Bepee), and “A’int Nobody” featuring an unmentioned vocalist. The featuring artistes in these tracks brought their sounds and various styles like breaths of fresh air to a project whose solo songs are mostly repetitive and formulaic. He also features Olamide in “Do You Wrong.”

“Ike Pentecost” featuring Flavour proves to be the worst collaboration in the project—and probably the worst both artistes have done together. In this track, the cluelessness and self absorption of the duo come to a head. The song sounds like a bad mix of Flavour’s previous songs, “Doings” and “Levels,” the former which Phyno featured in.

“Something to Live for” is not a particularly bad album. And when listened to in isolation of his previous albums, the quality of the music is good, if for nothing, for the impressive melody—borne from Phyno’s experimentation with Highlife and Igbo folk music, which he has learned to infuse in his music. A new ear will definitely see his talents and capability in it. But the project is unlikely to do same for a listener used to Phyno’s music for most of the past decade. The album, after the first two tracks, barely shows Phyno in a new light of what growth has taken place in his craft since his previous album.

“Something To Live For” is the album of a rapper charting known Pop territories. Nigerian rappers have been known to be fluid in their testing of different genres in order to stay afloat in the ever-transitioning industry whose consuming audience has largely unstable tastes.

Here, he tries once again to experiment with the hip hop genre. Rapper, Olamide’s with hit tracks like “Julie” and “Pon Pon” is a great example of a rapper making a switch to Pop. But while Olamide succeeds in creating new sounds, Phyno seems to struggle to do so.

Phyno’s place in the industry is a solid one, and over the past decades, he has cemented his place in the consciousness of his teeming fan base. And although he has fallen below par in this new project, it is safe to say that the album will still get an impressive listen, and that his place in the industry is secure for him to rise up again. But clearly, he needs new ideas. He recently came under backlash for rapping about women and partying when featured in “Egedege,” a song widely considered spiritual and cultural.

Hopefully, we do not get another project this repetitive and lacking in new ideas, so much that it seems borne solely from the impulse to put out an album. Surely, Phyno’s fans deserve something better than this in a project grandly titled “Something to Live For.“

Michael Chiedoziem Chukwudera is a freelance writer and editor. You can reach him at Chukwuderamichael@gmail.com. Follow him on twitter @Chukwuderaedozi.