The script waters down the interest of the viewers with an abrupt ending, and just like a torn last page of a storybook, Side Dish leaves the audience more furious than anxious about what’s next…

What would you do if one night of fun and pleasure changes the course of your life forever? What would you do if only by “seeing,” you become an accomplice to a crime? It will be fair to note that Side Dish has absolutely nothing to do with food, but rather, the fate of a cheating woman’s sidepiece. This line in Ginny’s poem from the Netflix series, Ginny and Georgia, “Just by knowing, by seeing, that was my agreeing. My hands wet, once clean, dirty with sins I don’t mean, words I didn’t say, dragons I didn’t slay. I inherit the sin and I become the monster that I was born from,” is relevant here.

In the South African crime mystery thriller written and directed by Mandla Ngcongwane, a series of bad decisions leads to the ruin of a group of women. In the How to Get Away with Murder series, criminal law professor, Annalise Keating (Viola Davis), reveals to her students the steps to get away with murder — discredit the witness, find a new suspect, and bury the evidence. In Side Dish, these women experience their first hand DIY on how to get away with murder. When four women decide to take a girls’ trip away from the reality of adulthood, the weekend is all fun until one of them invites a lover to make the weekend even more memorable. What could go wrong? Apparently, everything.

Sli (Jo-anne Reyneke), Joyce (Matshepo Maleme), Amanda (Refilwe Madumo), and Phiwe (Thuso Mbedu) are entangled in the murder of Richard (Bohang Moeko). Sli is a provocative young mother of one whom, like Christall Kay in The Real Housewives of Joburg, leads the tribe and is married to an older man. Joyce is a happy mother of three whom, in her words, “found a man and made him just what he wanted him to be like.” Amanda is in a rocky marriage with her husband, Boyz, due to her inability to conceive. And Phiwe, the youngest of them and a cousin of Amanda, is engaged to marry Apollo (Ntando Menzi Ncube), a detective.

The primary intention is to get time off from the crazy strains of motherhood, but with their lives blowing up in their faces, soon an accidental death occurs, and a single cover-up attempt haunts the existence of all those involved.

Side Dish is no Russell Crowe original, but it still keeps the viewers at bay with its well-written mystery. The movie drives viewers through a world of repeated crime, infidelity, adultery, and unrewardable loyalty. The loyalty of friends is tested as the tragic psychological effect of their past comes to haunt their almost perfect present. The first episode establishes the root cause on which the entire production is based. It gives details of life after a crime has been committed but does not strongly pique the audience’s interest. Hence, no real action is seen until the final episodes.

Each of the four episodes runs for approximately 43–45 minutes. While the production appears to be straightforward, the first two episodes of the series feel overstretched and indigestible. In the interest of the viewers and a need to keep them in touch with the series, there was a need to have some unnecessary scenes cut for better pacing. Did we, for example, need a backstory about Amanda’s relationship with her grumpy mother, or Sli’s business moments at her salon? It is easier to blame the ruin of a good movie on the poor post-production editing and unnecessarily stretched scenes; however, most of the cast members are not totally innocent here. A film may be as fast-paced as it should be, but will still be drowned by poor acting. The cast in Side Dish are neither perfect nor terrible. For instance, Sli and Apollo’s role execution gives you a live-in experience, as opposed to Joyce and Amanda’s, who display a bit of idiocy in their acting. Each character’s theatrical skill and presence brings the play to life and mirrors their character in a way that the writer(s) most likely envisioned.

After the incidents of their unfortunate meeting, the ladies decide to part ways. The real question is, are they apart, or are they bound by the secrets they share? Side Dish shares a similar murder mystery plot as Pretty Little Liars, only a more predictable and tacky version. The script waters down the interest of the viewers with an abrupt ending, and just like a torn last page of a storybook, Side Dish leaves the audience more furious than anxious about what’s next.

In the early episodes, the series tries to have fun with montages, either with ants marching in lines to represent the boredom and mundanity of school life, or with animal planet montages of animals and insects mating (accompanied by moaning sounds and finished off with a champagne bottle pop) to showcase sex and sexual satisfaction. This is new to me, but note-worthy.

Thankfully, things are not all bland in the production. The soundtrack in the intro is everything. Detailed, captivating, subtle, and rich. Just like the soundtracks in Blood & Water, and Pretty Little Liars (Secrets by the Pierces), the soundtrack in Side Dish plays a significant role in captivating the viewer’s interest, and matches the mood of every act. Also, the character of Phiwe is a true tearjerker, as she delivers brilliantly in her interpretation of her role. She owns her scripts and delivers to the best of her ability. She goes from being a sweet, innocent lover girl to a nerdy, psychotic character. There’s no questioning her strong theatrical skill, as she duly proves herself with her performance in The Woman King. 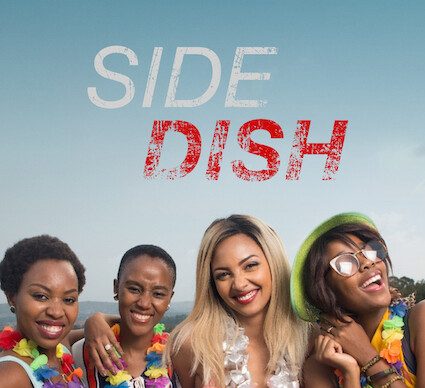 Although it seemed like an hour too long, the consistency and style of Side Dish makes it bingeable. Even though there is no real moment of climax, the story paces so fast across the moments that it doesn’t even recognise those moments. And no, the movie doesn’t just skip scenes and leave gaps. The voids and gaps in the film seem like the writer’s strategy of choice, either to shorten the length of the film, or to give us something to talk about.

Still, the beauty of the Side Dish cannot be overemphasised. The story is relatable. Mistakes are made, and lessons are learned. Even if the blows of crime are delivered lightly, the series picks up in its final episode as if there were no scars. It is quite unfortunate that the end ruins the excitement. However, it is a decent watch, but not in a PG-13 kind of way.

(Watch Side Dish on Netflix)

Blessing Chinwendu Nwankwo, a film critic, beautician, and accountant, currently writes from Lagos State, Nigeria. Feel free to drop your opinion in the comment section below. Connect with her on Twitter at @Glowup_by_Bee and Instagram at @blackgirl_bee.