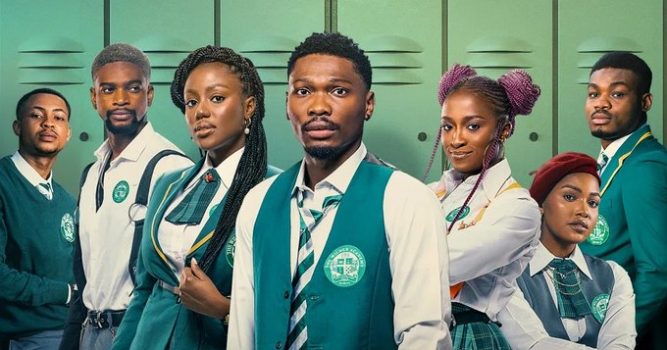 Far from Home doesn’t deliver as strongly as the pioneers of its genre, home or abroad. There’s too much going on in it, yet it feels somewhat empty. Regardless, it’s bingeable …

What’s that Netflix original show about an elite young-adult school, poor or middle-class scholarship kids and a healthy dose of party or club scenes? No, I’m not talking about Elite. Let me be more specific. It’s also African, features a birthday party in its first ten minutes, and has a sad angle about a dead or missing child that forms the centre of a family’s trauma? Nope, it’s not Blood and Water. Wait, is it Nigerian? Yeah, the one that shares the same title as that Spiderman film. Oh, right, Far from Home? You got it! It’s Netflix second Nigerian original series, first Nigerian Young Adult series, and millionth Young Adult series about scholarship kids in an elite school. It’s the same formula, except it’s a lot more PG-13 and is set in Lagos, Nigeria.

In this version helmed by Nollywood’s Inkblot Productions, Mike Afolarin stars in the leading role as Ishaya Bello, a young artist from a poor background who literally dreams of becoming a world-renowned artist. It’s a talent he inherited from his ailing father (Paul Adams), but his mother (Funke Akindele) considers it the devil’s work because Ishaya’s father’s obsession with art led to their other son’s death — a tenuous link that the series manages to create. It’s this world that we’re first brought into in the first episode, physically located in a gracefully-shot lower-class Lagos neighbourhood with practically non-existent public infrastructure, where Ishaya’s family cannot afford much-needed medication for their paralysed patriarch. It is where his sister, Rahila (Tomi Ojo), is told by their mother that her dreams of attending a prestigious school is a pipe dream, and where his family, in desperate need of money to foot health bills, steals the money he’s saved up for an art apprenticeship with his idol in London.

That first episode dedicates most of its time towards establishing the poverty of the Bello family, as well as the motivations that will drive Ishaya for the entirety of the season. But at the same time, it desperately rushes through that background, as if working overtime to get past the penury as quickly as it can, so it can get to all the affluence. After all, we’re here for that one percent wealth, aren’t we? Before the end of that episode, we get the change it’s been in a hurry to get to. Ishaya’s dreams suddenly become within his reach after he gets accepted on scholarship into Wilmer Academy, an A-Level institution for the one percent. He finds new friends in “good-vibes” Zina (Genoveva Umeh), innocent Frank (Emeka Nwagbaraocha) and free-spirited Reggie (Natse Jemide). Then makes new enemies in the egoistic Atlas (Olumide Oworu) and the perpetually blank Denrele (Raymond Umenze). And he develops an interest in Carmen Wilmer (Elma Mbadiwe), Atlas’ girlfriend and the child of the school’s owners.

But he’s made some very bad decisions in pursuing his dreams, and the results are three-fold. First, he’s alienated himself from his family, including Rahila whose dream it was to attend Wilmer Academy in the first place. Secondly, he’s drawn the ire of his girlfriend, Adufe (Gbubemi Ejeye), whose hurt is sure to spell doom for him. And he’s also put himself in the crosshairs of Government (Bucci Franklin) and Rambo (Bolanle Ninalowo), the violent drug-dealing owners of the club where he works his night job. Now, he’s got to navigate young romance, rivalry, friendship, family, and class structures, with the constant threat of death hovering over him. Or something like that.

In reality, the only thing Ishaya truly navigates is how to not be eaten by Government and Rambo’s pet hyena. When the writers decided that this series would be about Ishaya, they really meant it. Far from Home is as Ishaya-centred as Ishaya, himself is self-centred. Nothing else seems to matter much, and almost nobody else is an individual with their own independent story that can survive without Ishaya’s involvement. Everything that isn’t about him either never gets properly set up or gets lost along the way. If a plot point is given any real attention, you can be sure that Ishaya has a major stake in it. Carmen’s relationships with Atlas and her best friend, Nnenna (Ruby P. Okezie), are only important because they eventually affect her budding relationship with Ishaya somewhere down the line. Frank’s entire relevance revolves around Ishaya. We somehow go through all five episodes without getting any background on Zina and Reggie, both of whom have the potential to be very interesting characters. The series manages to place Ishaya at the centre of Adufe’s very strange meteoric rise to power. And with all that attention directed at the series’ lead, even wealth, which is usually elevated to character status in shows like this, takes a back seat. When Far from Home does shift its scenery to the wealthy side of Lagos, we barely get to see affluence and influence in all of its glory. Not in lifestyle, not in infrastructure, and definitely not in the wardrobe.

It’s surprising that Far from Home doesn’t pick up the extravagant display of wealth and power as the other shows like it. Especially because Far from Home wears its influences on its sleeves, from as close as South Africa’s Blood and Water, to as far as South Korean The Inheritors. For instance, at the end of the third episode, there’s a football match sequence — one of many events that do not get set up adequately, by the way — accompanied by a cheer squad and a “Wildcats chant” that sound straight out of Hollywood. While that goes on, there’s also a science project (for want of a better spoiler-free description) playing out in another part of the school. The entire event is so similar to that sequence preceding Troy and Gabriella’s “Breaking Free” performance in High School Musical that it just comes off as weird. These influences are bound to make Far from Home feel foreign and out-of-touch to many, especially among the Nigerian majority who were not privileged to attend schools like Wilmer. And while that doesn’t make the series any less Nigerian, it does raise a question as to where the line is between a nod and a copy.

(Read also: Opinion: What, Truly, Is the African Story?)

It might be Netflix’s first Nigerian YA series, but that’s not enough justification for its needing to rely too much on borrowed ideas. Far from Home doesn’t even get to enjoy the praise that comes with novelty. There have already been a number of interesting Nigerian YA series, from television series as far back as I Need to Know to present-day web series such as Shuga Naija and Best Friends in the World. Unfortunately, Far from Home doesn’t deliver as strongly as the pioneers of its genre, home or abroad. There’s too much going on in it, yet it feels somewhat empty. Regardless, it’s bingeable and just as enjoyable as the most popular Nigerian web series, really just feeling like a web series with long episodes (Skinny Girl in Transit’s Dami Elebe did serve as head writer on this show and also as co-creator alongside Inkblot founder, Chinaza Onuzo). Plus, despite having an unforgivably underutilised star power, it does boast of mostly competent acting across board — except Umenze’s stiff performance as Denrele. Afolarin’s engaging delivery is the only redeeming quality of his character, Ishaya. Bimbo Akintola is a class act as the wealthy, controlling Mrs Wilmer-Willoughby. Jemide and Umeh thrive as the breezy cool kids, despite being given very little to work with. Franklin and Moshood Fattah deserve special mention for their precise performances as Government and Ishaya’s bosom friend, Michael.

I’m not a fan of the chaotic editing, or of the distracting and lazy (albeit catchy) Afrobeats soundtrack and detached score that initially accompany the scenes, but they — the score, at least — do get better in the Kayode Kasum-directed third and fourth episodes — the most sublime episodes of the series. Kasum (Castle & Castle; Riona) is especially good with hitting the emotional notes in his parts, and the cutest romantic moments are shot under his direction. Beyond his episodes, though, the entire show is so beautifully shot, has a gorgeous cast, and tries very hard to be authentically Nigerian in its language.

(Far from Home is streaming on Netflix here.)

Vivian Nneka Nwajiaku, a film critic, writer and lawyer, writes from Lagos. Connect with her on Twitter @Nneka_Viv and Instagram @­_vivian.nneka.