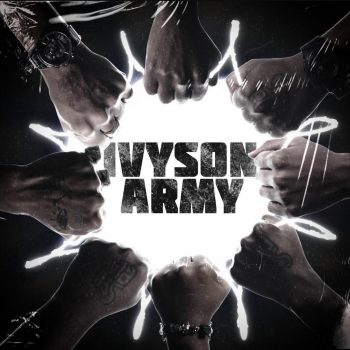 Nasty C Ivyson Army Tour is a fleeting musical euphoria, snippeting the sort of ‘high’ that Nasty C’s intimate records can evoke, while distinguishing itself as a well-written, well vocalised and poorly arranged body of work…

On Nasty C’s both arms are tattoos that speak volumes into his inspirations. On his left arm is a trio of an eye, the letter V and a sun. And on his right arm is the phrase ‘Ivyson.’ He inks this metaphor, which is really a memoir of his late mother, Ivy, hence, Ivy’s son. It has been the moniker for his long-running tour, which peaked around May this year, and would continue till October. And now it is the inspiration behind his 10-tracker Ivyson Army Tour mixtape which stamps his artistic prowess as an intimate storyteller with an egocentric aura to his craft.

Like he did with his acclaimed 2020 record, Zulu Man with Some Power,  the Johannesburg Hip Hop maverick returns with some personal narratives on “Ivyson Army Tour.” In the second track, “Aye” featuring Blxckie and Emtee, he goes on a rant about his scuffles with his exes. “She actin’ like she don’t know who I am, okay/ You’re an influencer on the gram, okay/ All of the hatin’ it never works/ Bitches ignore and I’m never hurt.” This is a typical Nasty C braggadocio setting the pace for the tape. He revamps the same cynicism that colours the Zulu Man with Some Power album, especially on a song like, “Zone.”

The same energy seeps into the third song, “What I Like” featuring Tellaman and Nadia Nakai. “Classy ass, ratchet ass, balanced ass bitch/ PG 18, get some action ass bitch/ She’s a cheater ayy” on “What I Like,” Nasty C continues on his rant, glamourising the ‘bad bitch’ lifestyle, while stating his indifference towards it. He keeps up this ante, in the sixth song, “Import,” featuring Crownedyung, saying that he “Needs his bitch imported/ She falling in love, so I’ve got to abort.” The songs reek of trauma, and they reinforce the cynicism and melancholia that soars across the entire global rapdom, when it comes to talking about relationships.

(Read also: Invisible Currency Is A Refreshing and Punchy Return By Khaligraph Jones)

Yet, from the last song, “Stalling,” the truth comes to the fore, as Nasty C goes on a mid-tempo sober bop, that indicates he is deeply hurt by a failed relationship, but too proud to admit it. “You can just leave, if you wanna leave/ If you don’t wanna go the whole way/ Then goodbye goodbye/ You’re fucking up a good thing/ I won’t come back, I’m sorry/ I’mma finish what you started,” he says. For admitting that the relationship, or at least the idea of it, was a “good thing,” it is glaring that the project reflects his unfinished healing process, with him still being in the stage of anger and denial. It’s a deeply intimate narrative that he charts with his camouflaged bad-boy themes. And it is, perhaps, the cheekiest, yet most admirable part of this tape, the rawness that unfurls within his emotions, and the mirror of masculine stereotypes of ‘never admitting their heartbreaks’ that still exist quietly. It is also the only song on the tape where he sings, sprinkling some Tory Lanez-esque energy to climax the record.

Still, Ivyson Army Tour is not only an emotional rollercoaster on Nasty C’s love life. The other half of the record is his pensive and inspirational tour across his life’s struggles and inspirations. On the Emtee-assisted “Born to Win,” he sings about the celebrity life and the never-die urge to succeed. “First we will fail and then we get back up on/ Cause we never was born to quit/ You won’t prevail from sittin’ at home alone/ Time will tell what we end up sittin’ on/ I just hope all my niggas get rich,” he raps. In the Case-Klowzed-assisted track, “Extravagant,” he talks about his dreams of living the 5-star life. “I wanna live an extravagant life/ Extravagant kid, extravagant wife/ Mindin’ my business and handle it right/ I’m going crazy, I’m trampling light/ Get into the ring and I turn into Mike/ Get on the mic and I turn into Mike.”

He reminisces on his early adolescent struggles, especially on leaving home, in the Cassper Nyovest-assisted “Loco,” as he raps, “I said the minute that I realised I was in a pickle and life was too pickle/ I had to leave home, I didn’t wait for my dismissal/ Bitter-sweet moment, me and Pop had some issues,” and on losing his friends, “Glowed my wrist up/ Then friends start to switch up, of course they did/ I just never knew that it would hurt like this.” And in “Can’t Imagine,” he goes on a Big Sean and Kendrick Lamar style ego rant, rapping about being “In the league where you niggas never existed at all/ When I feel unsatisfied with the game, I refurbish it.” Across the tape, he showcases himself as the typical Alpha male, with zero emotional attachments, and 100 percent focus on his career and sources of income.

In his earlier bodies of work, Bad Hair, and Strings and Blings, he similarly underlines his themes with personal experiences, using his life experiences such as having bad hair, or his induction into the life of fame and glitz, as metaphors for a truck load of traumas, trials and other stories about his life. Every Nasty C record feels like a binocular view into the complex-yet-admirable sojourn that has been his life’s journey. Ivyson Army Tour feels like yet another slice of this cake.

As a body of work, the mixtape doesn’t disappoint for what mixtapes really are — appetisers. Its rough, monotonic sonic lineup does not really offend the listener, judging from the concept of mixtapes. Its flat arrangement, which flees from the opposite direction that Zulu Man with Some Power or his other serious bodies of work showcased, is not grounds to pick a quarrel with the musician over. The tape is not strong enough for seamless listens, and fans might have to cherry pick their favourite songs rather than listen to the entire record. Perhaps, an EP with fewer songs might have helped Nasty C’s strategy at this point. As fans crave his next album, and gleefully attend his sold-out concerts, it is only befitting that they hold on to something that’s more than an appetiser; something with a stronger replay value.

Nonetheless, sonically, the collaborations on the tape were uber-impressive. With such a star-studded lineup, the individual duets and trios on the tape feel like a success, with the collaborators each sprinkling their spice, without Nasty C losing his authenticity and presence on the records. Most of them are also his frequent collaborators, especially Tellaman. Nasty C’s chorus style of sung-rapping or Trapping also dominates the tape, giving it a very heightened Hip Hop vibe, which is a gradually diminishing feature on Hip Hop records across Africa at the moment. His cadence and vocalisation also shines through on this record, reaffirming him as one of the best African emcees behind the microphones at this time.

Cohesively, Ivyson Army Tour is a fleeting musical euphoria, snippeting the sort of ‘high’ that Nasty C’s intimate records can evoke, while distinguishing itself as a well-written, well vocalised and poorly arranged body of work. While it suffers from being underwhelming, it still shines as a strong buildup to his forthcoming body of work. From Nasty C, expectations are always high. And while it is not met in this mixtape, there is still something to relish in Ivyson Army Tour.

Chinonso Ihekire is a music journalist, critic, publicist and creative director based in Lagos, Nigeria. His writings have appeared in several European and Pan-African publications. He also sits at the International Committee of the All Africa Music Awards. He believes that music is art, and art has function. And he wishes to help you understand it better. Connect with him on Instagram: @Chinonsotherevolutionary.