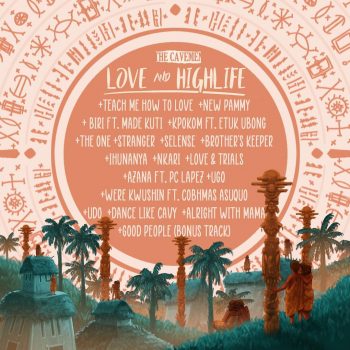 In “Love and Highlife,” The Cavemen. Become Better Masters of their Craft

Oliver de Coque as well as Osita Osadebe were pioneers of praise-singing for wealthy and sometimes corrupt individuals in the southeast. The music created by The Cavemen. is made so that it is self-sustaining….

(Note that the name stylicised as The Cavemen. always comes with a dot at the end. It is no typographic error. The dot was added to the name to avoid litigation from an Australian band who bore the name “Cavemen” before them)

The Cavemen. stole the hearts of many in 2019 through 2020 with their debut highlife album “Roots,” which arouses all form of emotions from nostalgia, to mushiness, to merriment. It was no doubt a spark which aroused curiosity, because their sound was unexpected. Many have since looked forward to what else this band of two brothers have in store for the audience they have gathered to themselves. The Cavemen. duo consists of two brothers, Kingsley Okorie, a Babcock University-trained lawyer, and Benjamin James, a musician who attended Peter King college of Music, Badagry. Brought up in Lagos, before their music expedition, they had only been to the east of Nigeria a few times, but their parents brought them up to be in touch with their Igbo roots. Listening to the music of Oliver De Coque, Osita Osadebe, Mike Ejeagha, and a host of others, they fell in love with Highlife and grew up in similar capacity as singers.

In the past week, the duo released a sophomore album titled, “Love and Highlife” which follows in the Highlife tradition of “Roots.” The album begins with the softly-rendered “Teach me how to Love,” before unfolding smoothly to a fleet of songs, captivating and arousing in their composition. The LP does not only continue from where “Roots” stopped. In this project, The Cavemen. have grown to become better masters of their sounds, attaining a better harmony and faster combinations of sound.

“Love and Highlife” embodies an innovative effort to perfect the recreation of Highlife while remaining conservative. The combination of drums, trumpets, piano, and other supporting musical instruments creates a sound that retains the traditional essence of Highlife.

The Cavemen. teaches us that innovation supersedes creating what is new—which is a beautiful thing to do—and that one can be innovative by taking what was there before and owning it.

The Cavemen. recreates Highlife in their own image and likeness. Here, there is no desire to mix Highlife and pop, neither do they give in to the pressure to go mainstream by making their sound commercial. The duo seems to be very pleased with what they have created, and they stick to their guns.

The subject of The Cavemen.’s music is love and philosophy. There is no talk of money, clothes, women, or inane vanities. This lends a purist quality to the music. The duo seems to have derived some of their philosophy from the music of Oliver De Coque; and even the third song in the album, “Biri” is a sample of Oliver De Coque’s classic “Biri ka m Biri,” a song which espouses the principle of “Live and Let live.” But even while they have borrowed from Oliver De Coque’s music, they have been careful to avoid adopting the praise of politicians and wealthy people in society, a style rife in Oliver De Coque’s music. Oliver de Coque as well as Osita Osadebe were pioneers of praise-singing for wealthy and sometimes corrupt individuals in the southeast. The music created by The Cavemen. is made so that it is self-sustaining. It does not pander to any clique, nor does it seek validation from any group of people.

The love songs in the album are very pleasant. “Teach me how to love” and “The One” have imploring and soft-calling qualities. Here, there is a desire not just to love, but to go to a peaceful place where love can soar. “Stranger” and “Nkari” are like ballads on highlife; songs which lovers can dance to. “Ihunanya” treats the topic of love as a philosophy of life. Where there is love, there ought to be peace.

Likewise, “Biri,” “Azana” ft PC Lapez, and “Udo” espouse the philosophy of peaceful living through tolerance, ignoring one’s naysayers as a way of killing disputes, and the general continuous search for peace. There is “Ugo” a celebration of the Igbo anecdote of the rain bathing an eagle. There is also music which makes you dance with little or no concern for its meaning; in this category, we have “Kpokom” and “Dance like Cavy.”

The music creates an atmosphere of serenity in a chaotic dispensation. It is an art that creates for one options of a different set of realities to help one escape a monolithic, drab reality.

Listening to this album, I am moved to gather a group of friends and give them palm wine and food while we dance to it, as was done by members of my book club in Asaba the day after the album release. Alongside affection, “Love and Highlife” inspires the spirit of communion and merriment, and of course, brings highlife in its purest form home to the younger generation.