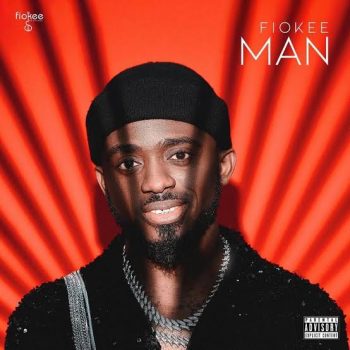 On a wider viewpoint, Fiokee’s musical blueprint appears to reflect the magic that is embedded in the musical progressions of other African guitar giants…

Ifiok Effianga, one of Nigeria’s most prominent guitarists, has returned again to the fore with his smash debut dubbed, Man. The 14-track soundpiece is a rollercoaster of self-assuring odes, romantic melodies, and electrifying groove, bringing Effianga, better known as Fiokee, into a full sonic maturation.

When it comes to storytelling, Fiokee’s melodies are as intentional as the lyricism of his collaborators. From his sharp-fingered staccatos, to his legatos, down to his thrills, anytime Fiokee touches his trebly guitar, he travels down a nostalgic, or sentimental narrative.

This textbook style of music-making is the magic that is reflected in Man.
On this album, Fiokee stretches the storyline from his array of commercially successful singles, such as “Sweetest Thing” (featuring Ric Hassani), to “Like” (featuring Reekado Banks and Tiwa Savage), to “Dumebi” (featuring Davido and Peruzzi), reflecting the realities intertwined in adventure, treasure or love seekers. From the first track of the album, one already envisions what to expect as the song dubbed, “Good Time” featuring the Puerto Rican brother duo, Jean and Alex, as well as Nigerian superstar T Classic, is one of the most enchanting project openers in years. The song sets the theme for some light-hearted vocal caressing, and is followed immediately by the “Smooth Operator” agenda, perfectly engineered by the Dutch singer, Nelson Freitas, as well as Nigerian sound-whiz, Masterkraft.

The album soaks itself in message, melody, and mood-lifting groove, as Fiokee forays beyond the realms of limitation on almost every song. With non-stop experimentation, he gets “Personal” with Bella Shmurda on the acoustic Amapiano bop, igniting the vibe with his masterful riffs. He sojourns beyond Afro-Pop, Afro RnB, to the plains of Highlife where he taps the fraternal duo, the Cavemen., to serve a soulful bop dubbed, “Nne.” Fiokee’s mastery soars in his ability to make his basslines and outros stand out as mesmerising mood-lifters; becoming so melodic that they even wrestle with the vocals from his collaborators for attention.

Another gem on this project is its amazing collaborator list. From the crannies of Puerto Rico to the nooks of Lagos, Fiokee harvested the ripest of talents in the curation and creation of this project. It is a neat mix of A-list acts, as well as fast-rising artistes with enough magic to match the energy. From the East African Bongo Flava melodies served by Maua Sama, to the Caribbean energy doled out by Jean and Alex, to the edgy Street-hop groove from Bella Shmurda, to the culturally ‘woke’ highlife fiesta from Eastern Nigerians Umu Obiligbo and The Cavemen., to the emotive love stringing gem from Simi and Oxlade, the entire record flows with the right ‘duet and trio’ chemistry. All the records sound like a match that could have only been made in heaven.

Cohesively, this is a soothing project. Fiokee’s agenda to create ‘happy’ and timeless music continues to trail his discography. It is reminiscent of the moment he first learned how to play the guitar from a kind-hearted cabbie driver in Lagos. Man is a sandwich of dancehall and introspection. It is a solid representation of where African music is racing to – to be globally relevant and impactful.

With the closing track, “Goodness and Mercy,” featuring the elegant chanteuse, Ada Ehi, as well as the maestro Nosa, Fiokee drops the guitar in a prayerful and inspirational mood. The project feels like a refreshing bath, washing over with awe as you relisten.

Graduating with a first degree in Mechanical Engineering from the Petroleum Institute of Engineering, Fiokee has remained a very calculative mind. His rise-to-fame story, from his 2008 Star Quest reality TV contest, down to setting up his own record label in 2016, has been a narrative of intentionality and bravery. 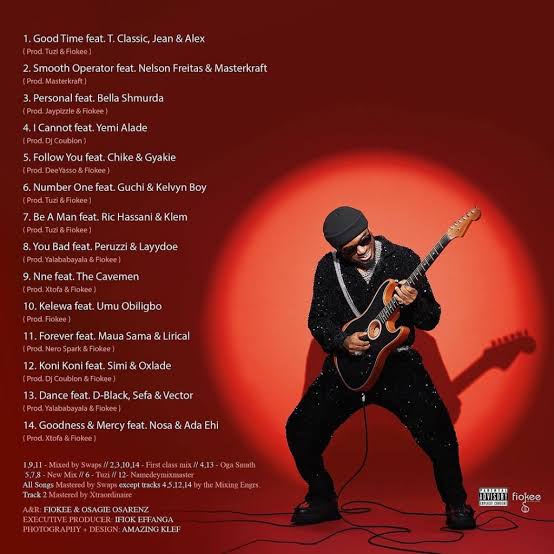 With Man, Fiokee sets himself up for constant evolution, upping the ante like like-minded greats such as the Malian, Ali Faka Toure; the Congolese Franco, and even Nigeria’s King Sunny Ade. Man is that playlist that never gets old, nor tiring. Its replay value is a reflection of the A&R whiz by Fiokee himself, alongside Osagie Osarenz. The engineers, from Swaps to New Mix, to First Class Mix, down to Tuzi, Oga Smath, Namedeymixmaster and Xtraodinare, pruned this record carefully, to be delicate, unique, but still mainstrea appealing. And that is just one of its various gems.

On a wider viewpoint, Fiokee’s musical blueprint appears to reflect the magic that is embedded in the musical progressions of other African guitar giants. However, Fiokee’s titanic might appear to be a generation of listeners that are not in sync with melodic music. Hence, his endless litany of collaborations. On one hand, he has the potential to soar to the heights of the American string icons, Jimi Hendrix, Chuck Berry, among others, while on the other hand his reach is limited by the vagaries of consumer-behavior, where nonsensical innuendos, infectious inflections, and falsettos seem to have more appeal than brilliant, well-composed riffs. It might appear to be more favourable for the Lagos-based instrumentalist to expand his movement to reach more African regions where artistic, melodic music is more respected and appreciated. Just like the Burna Boy and Wizkid scenarios, he is more likely to be valued at home after he has been valued abroad. A sad reality, yes! But even the Christian God, Jesus Christ, shared similar fates. Perhaps, it is just our default trait as humans.

Nonetheless, Fiokee soars, not just for his soothing, daring melodies, but also for his intentionality, bravery, and radicalism. And that is what it means to be a Man.

Chinonso Ihekire is a multimedia creative, with expertise in music journalism, photography and filmmaking. His critiques have appeared in several pan-African publications including PanAfricanMusic, Wakonte, Guardian Life, More Branches, Afrocritik, among others. He believes in the power of art to positively transform society. When he isn’t busy being a music nerd, he enjoys binge-watching fantasy movie series, writing poetry or organising youth raves.
Connect with him on Instagram