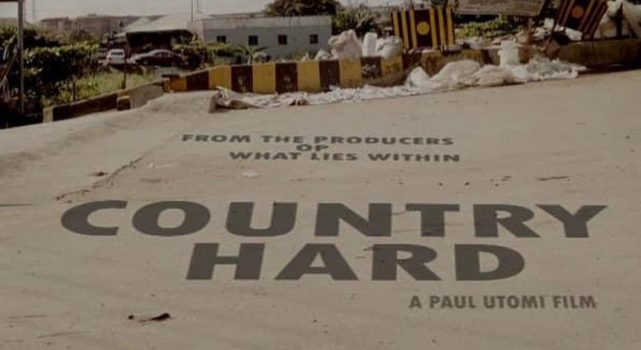 In Country Hard, much like a hyperlink, the paths of seven individuals interconnect in a way that may alter their lives. The vertex is Iredia, an eight-year-old boy suffering from neuroblastoma. He makes a one-time appearance, but his case is common knowledge, unifying the subplots. The movie starts in medias res, with Dinma (Kehinde Bankole) sitting outside a store in tears, Laide (Baaj Adebule) staring at the person he just ran over with his car, and Jubril (Paul Utomi) and Fadeke (Theresa Edem) both seated in a car, worried. Then, standing on a bridge, Ochuko (Tope Tedela) points a gun up his chin. Does he take the shot? I guess we will find out.

The 2021 crime drama from Paul Utomi is deeply rooted in the misfortune experienced by the lead cast in the country’s unfavourable economic situation. It emphasises various subplots that are not only intertwined to allow for the meeting of the many characters, but the film’s transitions also converge scenes and increase suspense. However, the transitions are too many; they can drown the viewer. With the intent to be smart and attentive to get the message, the movie goes from a means of relaxation to an extracurricular work. In its nature of marrying subplots, Country Hard which made its debut at the 2021 African International Film Festival (AFRIFF), takes on similar structuring as Michael Dougherty’s Trick ‘r Treat and relates the poor standard of living to the economic situation as in Ekene Mekwunye’s One Lagos Night.

Country Hard examines the experiences of people from various walks of life, and enlightens us on the perilous possibility of crossing paths with strangers, and its augury. Dinma is broken and cuts out her family after losing her daughter; she blames the world and is ready to end it all by suicide. This process is interrupted by her landlord’s knock for rent. She’s brought back to reality and decides to live another day. Working as an attendant in a supermarket, Dinma makes contact with every other lead at that location. The supermarket is an integral part of the movie; it is its importance that places it as the rallying point in the movie.

We are given Tola (Omowunmi Dada), who is on a fence between fear and faith as she informs her boyfriend, Laide, and her family of her pregnancy. We meet her character in a series of scenes, but none are realistic enough to sell the story. On the other hand, Laide’s character does more impactful acting, and he sells us on the character of an unemployed, average man who discovers his girlfriend is pregnant. However, a non-generic act is adopted as he accepts the responsibility, as opposed to a fight ensuring and resulting in disruption between the couple. At first glance, Jubril and Fadeke look like a couple that just got out of a fight. However, a full watch exposes us to the real events that led to that moment. Their friend Chima (Timini Egbuson) has just been rushed to the hospital from a hit-and-run scene. Chima, after being rejected by Fadeke, storms out of the party and is followed by his best friend (Jubril). Fadeke leaves the party and drives off crying. Unfortunately, her car stops in the middle of nowhere. With her battery dead, she starts to walk back in the direction of the party.

Chima realises his reaction was a bit harsh and sets out to find Fadeke. He discovers her car parked and sends Jubril to go find her while he tries to fix the faulty car. He wears his headset and doesn’t hear when a car comes as he tries to pick up the fuel cap. He is hit by a car and bleeds to death.

Further in, the character, Ochuko, is introduced midway as a desperate young man who will do whatever it takes to meet his goal of travelling to Europe for a chance at a better life. He tries to borrow from friends and family but is met with negative responses. Soon, he goes ahead to make robbery attempts and has an encounter with Tola, who has him question his choices. As a part of his sober reflection, he visits home to see his mother. Just like the prodigal son in the Bible, he is welcomed and fed. Unfortunately, after his unsuccessful meeting with his mother, Ochuko goes into the supermarket to rob and gets into a fight with Dinma, who tries to take the gun from him. Their wrestling halts when Ochuko discovers a stray bullet has hit Tola, who had come into the store to make some purchases.

Country Hard is an amazing and well-thought-out work. It has good scripting by Utomi and commendable cinematography by Kayode Kasum. Also, the skillful angle shots and intertwined plot play a good role in holding up the suspense, giving the viewer a chance to be part of the production. On the downside, the transitioning is too much for one production, and the acting is too calm and unreal for the situations portrayed. The movie lacks action and profound theatrical performances. The actors all embody the calm narrative, probably put in place by the director or the script; one can hardly tell. Every character besides Bankole and Egbuson is trying to be the good guy, even in situations that require a more intense reaction. A clear instance is the point where Tola breaks the news of her pregnancy to her parents. For an African home setting, the reaction is a bit underdone. The movie takes an unreal turn in its ending, where all the previously injured cast members are resuscitated. Sober and hurt from his mistakes, Ochuko decides to forfeit his dream of studying in Europe. Instead, he anonymously pays for Iredia’s medical treatment.

(Read also: Eyimofe Review: An Ever-Relevant Interrogation of the Pressing Reasons to “Japa”)

Although there is a lot of bad acting from the cast, from surreal actions to rigid body language, Country Hard is still a decent watch. The film gives its viewers a reason to be attentive and notes the course of events as they unfold. The way the movie marries its subplots ensures that all loopholes are fixed and creative thoughts are brought to life in this production. Asides the suppressed acting, the impression many will derive from the movie is that there was either wrong casting or the actors’ talents weren’t properly utilised.

Blessing Chinwendu Nwankwo, a film critic, beautician, and accountant, currently writes from Lagos State, Nigeria. Feel free to drop your opinion in the comment section below. Connect with her on Twitter at @Glowup_by_Bee and on Instagram at @blackgirl_bee.