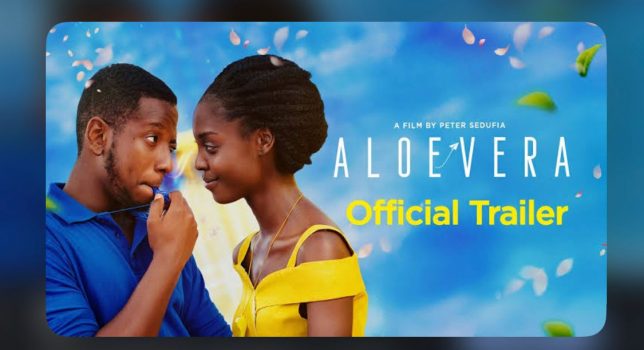 Aloe Vera is classified as a romantic satire and probably the first since Dinner at My Place. “Like the wind, you blow me away, that’s why my heart caught you,” is probably the cheesiest line you will get to hear the two lovebirds say in Peter Sedufia’s 2020 romantic drama. This is a love story between Aloewin (Aaron Adatsi) and Veralin (Alexandra Ayirebi Acquah), young adults who fall in love against societal interference and differences. The setting is a fictional community whose division starts from a debate between kids. This argument results in the division. One part is named Aloe, and the other, Vera. Each chooses a colour, blue and yellow, respectively. Besides the rules to never speak to or cross each other’s boundaries, both villages live harmoniously.

As humans, disagreements happen every day around us. According to LeadStrat, there are different reasons people disagree — an argument over information means they are not listening to each other; they have different opinions, values, experiences and, lastly, personalities or past histories with each other. The 2020 Ghanaian film by Peter Sedufia covers all three mentioned.

An invasion or the slightest trace of their presence or property within the other’s borderline, and an eye-witness blows a whistle. The Aloes and Veras then pick out their fighters in preparation for a duel. Whoever gets pulled over the marked grounds becomes a slave to the winning side. The first insight into this is in the first 10 minutes when kids from the Aloe side lose their ball to Vera territory. While the duel does not favour the Aloes, Aloewin seems unbothered. Even more, he is captivated and love-struck. He lays his eyes on Veralin, and his world seems to take a pause. The look in his eyes carries a thousand unsaid words.

Soon, their interest and attraction grow from seasonal events to exchanging smiles and glances from their room windows. They eventually get a chance to talk when Veralin’s pet dog runs across the Aloe territory, and Aloewin decides not to blow it in. What did he do? Your guess is as good as mine.

Growing fond of each other, they start exchanging letters, expressing their feelings. For the first time, Aloewin and Veralin make a run to the end of the borderline and take a step on each other’s soil. They spend the rest of the day in each other’s arms, far from the village.

Back in the village, the Veras set out to look for Veralin and discover that the Aloes are also missing someone. Not much of a coincidence, I guess. Before the search, Aloewin reveals his interest in Veralin to his uncle and best friend, Aloedin (Adjetey Anang). When Aloedin finds the pair, he hides them in his house till the search ends. While in hiding, the lovebirds decide to make their nest in Aloedin’s bed. He quickly sends them home, but a little too late as Veralin already had an Aloe-baby growing inside her.

Soon, Veralin’s father finds out about the secret affair between the two and blows the whistle which lands Aloewin in trouble. Aloewin blames Veralin for letting her father find out about them.

The focal point of the movie is the paint mixture of blue and yellow to make green, which Aloewin uses to paint the baby hut. Aloe Vera is more logical and thoughtful than mere eyes can see: the creative adoption of the names and the fact that aloe vera is a green-coloured plant. 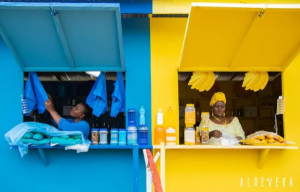 Aloe Vera could have been a typical boy meets girl, boy falls in love kind of story, as it has similarities with Gnomeo and Juliet (2011), and the 2013 South African short film, Kanye Kanye, but Sedufia adds spikes of uniqueness to it. He takes the Romeo and Juliet story and changes the narrative, making a sad ending into one that ends happily.

The writer confines the story to the divides and does not hint at the possibility of an outside world. Also, we cannot fail to recognise the artistic measure and colour blend of Aloe’s blue and Vera’s yellow. The visuals are pleasing to the eyes, and although consistent, it’s never too much. The cinematography complements the direction. The cinematographer manages to capture the essence of each character. The cast brings the film to life with their skilled interpretation of the script and outstanding theatrical performance.

While everyone may like fantasy romance, the movie could have done better with a little twist to intensify the plot. An additional subplot may have made the movie less predictable and given the viewers a more intriguing feel. Suspense in a film sometimes helps to keep it at the top of viewers’ minds. It creates an impression and gives them a chance to use their imagination. The story goes straight to delivering a fairy tale love story that proves love conquers all.

Aloe Vera leaves us with many questions, like, “what do they do for a living?” Or “what do they eat?” While understanding that the producers just wanted to create something simple and lovely, it holds an unreal logic to human existence. While the story may have played out exactly the way Sedufia imagined, a little adjustment or the addition of a subplot would have made the movie more memorable.

Sedufia’s Aloe Vera is a decent watch and probably perfect for a movie date. However, it is not intellectually challenging, so if you expect to see some logical reasoning or intriguing scenes, scenes that have you anxious to know what is next; you may be let down.