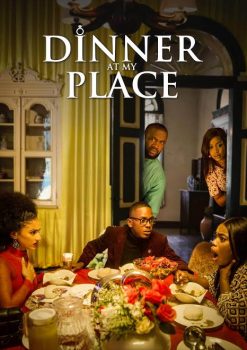 Dinner at My Place Review: In Kevin Luther Apaa’s Rom-Com, Romance Is as Important as Comedy

Dinner at My Place is a movie that knows that it’s being ridiculous but revels in its ridiculousness and wields it like a tool..

If there is one thing that Nollywood can guarantee filmgoers, it’s that the industry cannot lack romantic comedies during the month of February. And because the genre is one of those that do not have to deal with great expectations, Nollywood rom-coms often meet expectations. Rarely do they go above, though.

Released on the 28th of January, 2022, as one of the first films of the Valentine season, Dinner at My Place is not quite a classic, but it does a little more than meet expectations. And it turns out to be fun, too.

In Dinner at My Place, Nonso (Egbuson) plans the perfect dinner proposal that he hopes will end with his mother’s 22,000 USD ring sitting pretty on the finger of his lover, Chioma (Alakija). But things take a hilarious turn when Nonso’s ex-girlfriend, Bisi (Aiyeola), shows up at Nonso’s home during the dinner, and the ring seems to end up in the wrong woman’s stomach.

If the situation sounds ridiculous, that’s because it is. But that does not make it unbelievable. Dinner at My Place is a movie that knows that it’s being ridiculous but revels in its ridiculousness and wields it like a tool, while managing to present its story with considerable credibility. Nonso does not decide to propose by putting the ring in egusi soup as if it is ice-cream, which would be an unwise but acceptable rom-com style proposal with a Nigerian twist. Instead, he puts the ring in the soup by accident in a moment of panic.

Similarly, many of the movie’s events are unlikely, but not totally impossible. Together, they might feel like a fabrication, but the movie itself feels more original than it feels fabricated. It certainly helps that the events turn out to be genuinely humorous, if occasionally unnecessary or a bit over the top. There is no dull moment, and no excessively annoying one. And if the movie ever starts to feel too serious for its goals, the colourful palette and the mostly upbeat soundtrack, helmed by the award-winning film score composer, Michael “Truth” Ogunlade (The Wedding Party), do a solid job of holding up the scenes and lifting the mood.

But, perhaps, the loveliest bits of the movie are the scenes where romance takes front row. Egbuson and Alakija are nothing short of cute as Nonso and Chioma, evoking that “God when” reaction that audiences jealously long for. Egbuson might have found fame as an innocent young man simply in love with a more experienced young woman in the third season of MTV Shuga (before becoming a playboy in subsequent seasons), but he has notoriously been typecast as an arrogant playboy.

It is interesting to see him successfully, again, take on the role of a sweet but unsure man-in-love who is excited to settle down with the woman of his dreams. And despite Aiyeola occupying a weighty but never overdone presence as Bisi (Aiyeola employs a high-pitched voice to come off as annoying but still pleasing to watch), Alakija is as natural as can be, positioning herself as an active participant in both the relationship and in the movie, such that she never goes unnoticed.

At the background, Etubiebi and Montana hold their own as Jay and Cynthia, the best friends of the lead lovers. That they would start to develop feelings for each other is a cliché as old as the rom-com genre, but it is still nice to watch. As it should be, their romance takes the back seat in the story, but it never feels rushed, even though it doesn’t take long to grow. And yet, between the two romantic pairings, the movie almost always maintains a good pace and just the right amount of cheesy.

Unfortunately, when it seems like the movie has escaped the perils of the unfocused screenwriting that seems to be plaguing Nollywood movies in recent times, Dinner at My Place begins to dip. In fact, in the cinema hall, I remarked to myself that in overambitious hands, the movie could have turned into a kidnapping or heist movie the moment Bisi bragged about her new found wealth in a cab, and that the movie, unlike many others, is sure about what it wants to be.

But it turned out that I rejoiced too soon. Instead of ending midway into its third act, which is when its conflict (which never really hits the highest point) gets resolved, the movie takes the disappointing route and goes off course. It introduces an unnecessary prank and an even more unnecessary robbery in a last ditch effort to draw laughs and gain mileage in terms of running time.

Admittedly, the robbery and its accompanying scenes are sometimes funny, but the movie already has more than enough that is funny about it. If all the other ridiculous events are justifiable, the prank and robbery are not. And at the end of the day, the movie comes off as a less dramatic, rom-com version of Sugar Rush.

Still, Dinner at My Place is good entertainment, a fun watch with plenty of decent laughs. It knows when to pull at your heartstrings and when to make you almost roll on the floor. It balances out the elements of its story, never allowing comedy to overshadow the romance or vice versa. This is a movie that will make for a quality date night movie, especially since the parties are unlikely to get to the end. And it will likely come up in conversations about romantic comedies with the funniest proposals. It might even be one of the best rom-coms you will see this February. However, it fails to make the best out of its initially impressive set-up.