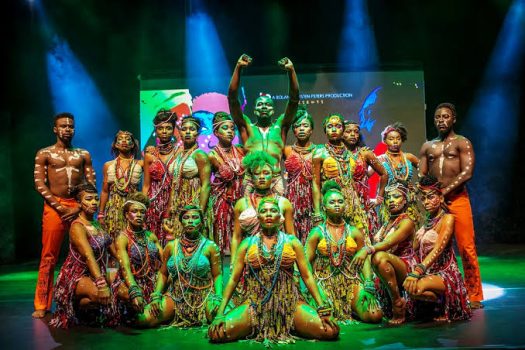 Fela’s Republic and the Kalakuta Queens, a Bolanle Austen-Peters production of 2017, tells the story of Afrobeat legend and icon, Fela Anikulapo Kuti, and the women who stood by him and supported him…

In the 1800s, Musicals found their roots in the French and Viennese Operettas. The satiric works of French artist, Jacques Offenbach, and the romantic comedies of Vienna’s Johann Strauss II were the first musicals to achieve international popularity. Musicals refer to a combination of theatre performance and music integrated with spoken dialogues, dance and acting. Being a significant part of the theatre, Broadway is seen as an inspiration to musicals around the world due to its global influence and talent exposure.

Most famous Hollywood stars had their first big break from Broadway. The stage gave them a platform to showcase their talent and be seen by talent scouts. Amidst the crowd, we have the likes of the phenomenal Nick Jonas who started as a 9-year-old on Broadway. Jonas appeared in shows like Beauty and the Beast and Les Misérables, and Ariana Grande was featured in the famous Broadway musical 13 at age 15, where she showcased her vocals. She also starred in Nickelodeon’s musical show, Victorious.

Many Nigerians are oblivious of the existence of musicals in Nigeria’s theatre industry. Theatre in Nigeria goes as far back as 1944, an idea brought home by Hubert Adedeji Ogunde. The Ogunde theatre, first dominated by the Yorubas from southwestern Nigeria, created productions of radiant mime, florid costumes, traditional drumming, and folklore integrated with music. Ogunde made a lot of notable works (Yoruba Ronu, Aiye) in theatre before his death in 1990.

Yoruba Ronu was produced by Ogunde during a difficult period in the Yoruba Land when Chief Obafemi Awolowo was jailed for sedition by a court organised by the then ruling party under the government of Tafawa Balewa. Aiye shows the self-conflicting attitudes visible in Nigerian communities. Aiye stands as a warning to people who misuse their power in every given position, to rethink their ways, or await their doom.

In more recent times, theatre growth has been on the rise with playwrights and literary dramas making evolutionary changes in theatre. Nigerian playwrights like Nobel Laureate Wole Soyinka and Ola Rotimi come to mind. However, a look down memory lane proves that theatre has indeed lost its footing in the mind of the audience.

However, this does not mean that the theatre has lost its touch, with talents such as Bolanle Austen-Peters, a.k.a BAP, a name that has been written on deep rocks in Nigeria Theatre. BAP is one of Nigeria’s most prolific theatre directors who has produced and directed most of the best Nigerian musicals and stage plays, taking it up a notch with every new piece, and attracting global recognition. She pioneered the national and international revival of theatre in Nigeria.

Bolanle relocated to Nigeria from Switzerland where she worked for the United Nations High Commission for Human Rights in the year 2000. She picked interest in Nigerian culture and remote art. Driven by her passion and desire to create jobs, she birthed “Terra Kulture,” a major cultural platform where Nigerians and foreigners alike, come to learn of the Nigerian culture.

In an interview with Google Arts and Vulture, Bolanle made known her motivation to be from growing up without an adequate platform to express her passion for arts (music, literature and dance). Her choice of African culture was because of its communication of history through beautiful metaphoric carvings, multidisciplinary works, appreciating history and expressing current societal issues. According to BAP, her thirst to build an experimental space for talented, young African minds, keeps her motivated, to keep pushing. This, however, is no shock as thespians from Terra Kulture continue to wow the world with their great works of art.

The exceptional lawyer, director and mother of two has built a reputable empire of art. BAP productions has grounded itself as a notable part of theatre through its constant production of memorable plays, breath-taking musicals and exceptional dance performances. Showing its relentless commitment to showcasing Nigeria culture at its best, through the performance and development of performing arts. BAP in partnership with Google Arts and Culture, creates an online museum of Terra Kulture.

The company has produced other notable works like Saro the musical, Wakaa the musical, Moremi the musical, and films like 93 days and Bling Lagosians ​and a few others. Most of her works have been featured in international film festivals, creating room for international affiliations and growing foreign interest in African works. One of BAP’s best productions so far is Fela’s Republic and the Kalakuta Queens.

Fela’s Republic and the Kalakuta Queens, a BAP production of 2017, tells the story of Afrobeat legend and icon, Fela Anikulapo Kuti, and the women who stood by him and supported him. The show digs deep into the life of Kuti, his birth, growth, career and entire life. It found ground in the untold defiance story of the legend, giving an insight into the inner walls of the Kalakuta Republic.

The stage play was captivating, admirable and appreciated by all who got to see it. The intriguing lighting effect adopted, the play with colours and the mix of modern-ancient music was a total step-up in theatre. The play gave out unbiased stories of Fela, not stereotyping his personality as “lawless, and polygamous.” We got to see Fela in his party spirit and loving nature, a part always tossed aside in his story.

The term “Kalakuta” is derived from Sanskrit origin, which means “Potion of Death.”Kalakuta was a corruption of a prison cell named “Calcutta” where Fela was once remanded. The women were called the “Kalakuta Queens” because of their endurance of pain, humiliation, intimidation and torture from the police and the general public as a result of their involvement with Fela. The women were described to be a source of strength and inspirational support to Fela. The play shows off Fela’s women, not just as concubines as assumed by many, due to an unclear story passed on, rather as his crowd and big supporters of his fight against a corrupt government.

The Kalakuta Queens had their uniqueness, admirable sense of fashion and energetic dance explored in the show, bringing to light their amazing African identity. Fela, unaccepting of the societal disregard for the women with him, who the society referred to as prostitutes, decided to marry all 27 of them in one day, to give them their respect and dignity. He afterwards renamed them Fela Queens. 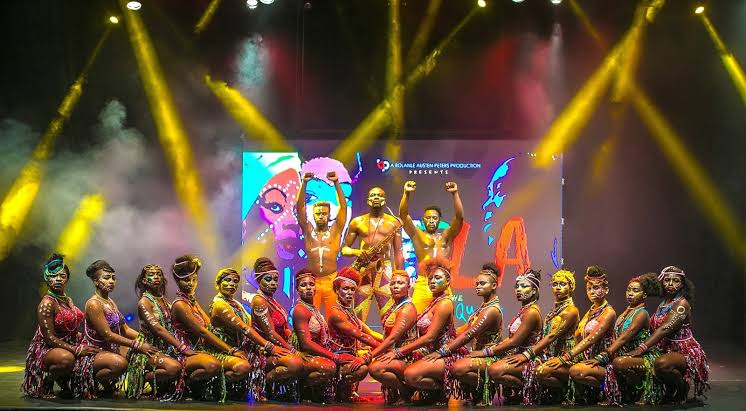 The intriguing factor of the musical was how popular Fela songs were performed intermittently with the stage play and blended with modern time sound and music to create a sound one can almost describe as heavenly. With songs like “You Dey Bleach O, You Dey Bleach” to “Dem Dey Craze” to “Shakara” to “Gentleman,” the cast mocked Africans who copy foreign culture. It also mocks, with Fela’s “Zombie,” the soldiers who go around taking orders to perform inhuman acts.

In 1977, after “Zombie” had taunted Nigeria’s military regime, soldiers attacked Fela’s compound and burnt it down; Fela’s mother was thrown out from a window and later, died from her injuries. Promptly, the relentless and fearless Fela did another song, “Sorrow Tears and Blood.” That constituted a major climax in the show, and from that moment, everything changed in the Kalakuta Republic, as many were injured and hospitalised.

Although the show was a high-hit in theatre, it didn’t slip off without faults. The stage play was on a clear lane of entertaining the audience and ended up barely caressing the surface pain felt across Kalakuta. It also painted what looked like a happy ending, contrary to the true story. However, BAP gave us an intriguing performance from the curtain opening to its drawing, the show was on and moving, totally engaging with no boring moment. This masterpiece has been shown in Lagos, Abuja and a few other countries on the continent, as well as in London, each time having its tickets sold out and reviews as positive as the first.

With the current interest of Nigerians at home and Diaspora, and foreigners, in African artefacts, now is a good time to reawaken theatre in Nigeria. Gaining off the huge sales platform of the Nollywood industry, theatre can be revived. It can as well employ Nollywood’s winning sales strategy of putting out famous faces upfront.

With a good number of theatre actors like Richard Mofe-Damijo, Sam Dede, Joke Silva and more, currently topping the list in Nollywood, now might just be the best time for them to build a legacy to remember for the Nigerian theatre, not just for economic gains, but also to share and keep alive our cultural heritage, tell the untold stories of the black man and as well, clarify those stories told wrongly. Theatre’s contribution to national development can never be overemphasised, as it is described to hold the power to persuade and influence the citizenry that makes up a nation.

Blessing Chinwendu Nwankwo, an accountant, beautician and writer, is currently serving in Uyo, Akwa Ibom State. Connect with her on Instagram @bee_patrick.