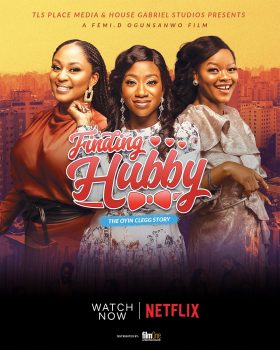 Literary adaptations are not exactly Nollywood’s stock-in-trade. On the few occasions that filmmakers have attempted to adapt Nigerian books into film, they have generally chosen “serious-minded” stories, from Biyi Bandele’s adaptation of Chimamanda Ngozi Adichie’s Half of a Yellow Sun to Tunde Kelani’s adaptation of Femi Osofisan’s novel Maami. It is very rare to find a Nollywood adaptation of a light-hearted work of fiction. Femi Ogunsanwo, a veteran filmmaker who has directed movies like Ojukokoro and Knock Out Blessing, attempts to fill this void with the film Finding Hubby. In this quest to translate fiction to screen, he enlists the help of Dichie Enunwa and Temitope Bolade-Akinbode, both of whom co-wrote the screenplays for When Love Happens and Namaste Wahala. 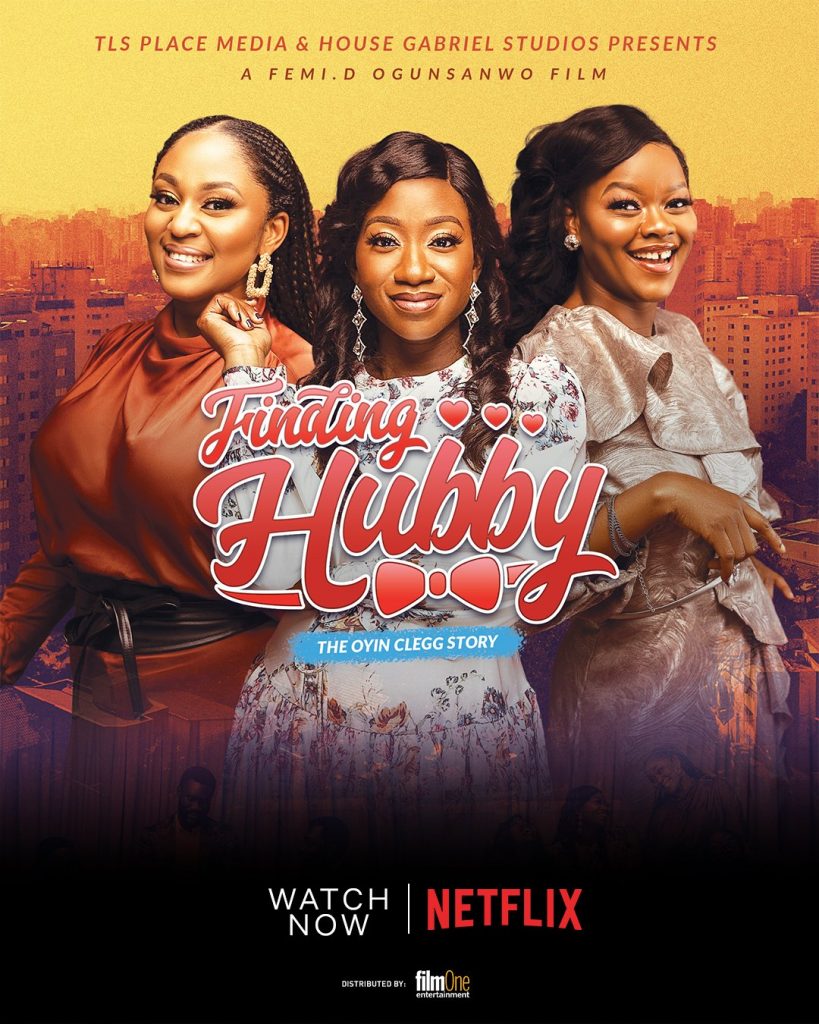 Originally released in 2020, Finding Hubby is a romantic drama that tells the intriguing story of 35-year-old Oyin Clegg (Laoye) and her two close friends, Toke (Bankole) and Gloria (Abii), as they struggle with their expectations and undesirable experiences in their quest to get married.

The first few minutes convey a high-quality Hallmark movie feel, including a bouncy soundtrack accompanied with a voice-over from Oyin Clegg that is sometimes a narrative voice and other times an inner voice. But it does not take long before you realize that this movie has more daring content than a Hallmark movie.

The winning characteristic of Finding Hubby is that it dares to break away from stereotypes while also being realistic about the heteronormative and sexist attitudes of Nigerian society. In bold defiance of Nollywood clichés, the leading women are not denied of sexual appetite and are not judged for being libertine. In addition, contrary to rom-com tropes that hold out leading women as objects of perfection, the women in this movie are real and flawed. Oyin herself is, in many ways, “shallow” and “unkind” – whether in hurting men for not meeting her expectations or playing a prank aimed at disrupting a colleague’s marriage – using honesty as an excuse for unleashing her ire at whoever she feels like. 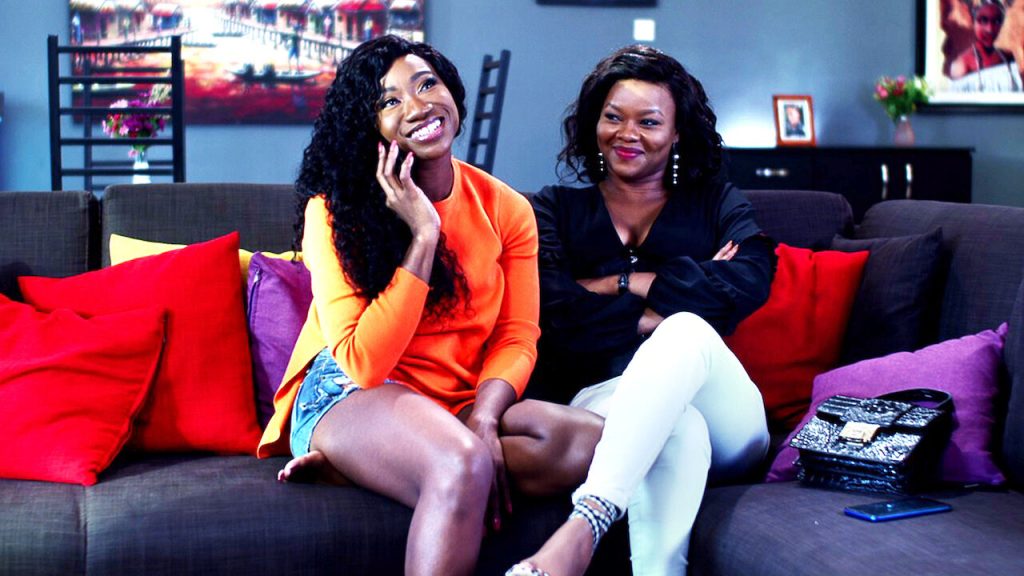 The near-accuracy in portraying real imperfect women is what makes Finding Hubby special, but it is also what makes it disappointing. The central plot of the movie, the quest to find a husband, is fuelled by the societal pressures that the women have to deal with. For a movie that brilliantly defies stereotypes, Finding Hubby misses the opportunity to make a statement that is impactful enough with respect to the societal pressure (on women above the age of 30) to get married. The only serious attempt to run with a different rhetoric comes at the very last scene where Oyin’s mother (Mba) encourages her daughter to entrap herself in an unfortunate situation for the sake of marriage.

Similarly, for a movie that handles female friendships with such deliberateness, it is unable to adequately develop or even properly illustrate conflict, especially between the women. The pacing of the film contributes to this problem: too many minutes are spent dwelling on trivial events, while the heavier things – such as romantic relationships – are hardly fleshed out or given room to develop. This struggle with pacing also contributes to the several bouts of awkwardness spread across the movie, although (thankfully) the awkwardness is often tempered by Oyin’s voice-over.

In terms of role interpretation, Ade Laoye renders a decent portrayal of Oyin, Tina Mba has the overbearing minister-of-marriage-affairs mother role on lock as she did in Jade Osiberu’s Isoken, and you can’t bring yourself to dislike Efa Iwara despite the sadistic role he plays. Eso Dike also puts in a very hilarious shift as a gigolo with an h-factor, stealing the two scenes he appears in. However, the individual brilliance of a few does not necessarily translate to a cohesive sum of their parts. Simply put, the acting across board is good enough to entertain, but not outstanding enough to make any long-lasting impressions.

Ultimately, Finding Hubby is an interesting, albeit imperfect watch. There are unusual twists that are likely to genuinely shock you if you have not read the blog series; not only does this make up for the lack of a resolution, but it also piques your interest in the possibility of a sequel. The artistic direction is impressive, especially in the handling of flashbacks — a big deal when you consider that flashbacks are hardly ever well done even in Hollywood. The movie does not dazzle with its wardrobe, but that is hardly a fault, as it is a testament to the presentation of women as what they are rather than what the media depicts them to be. 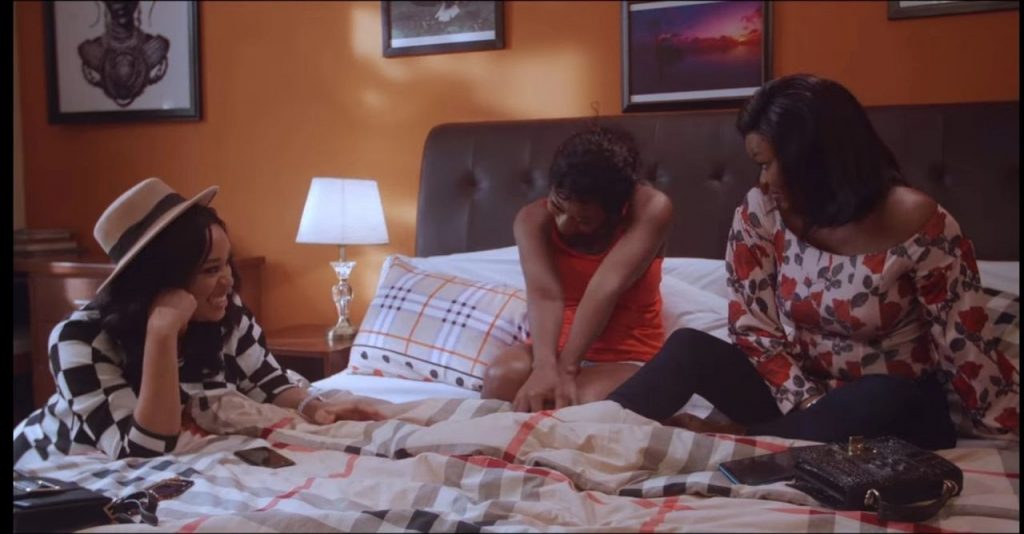 The movie works very hard to portray women in all ramifications, from work to religion, relationships, friendships, fun, and mischief. Unfortunately, as a standalone movie, it feels crowded and barely scratches the surface. If it does get a sequel, we can only hope that the filmmakers consider a television series for the space and time they need to make magic.