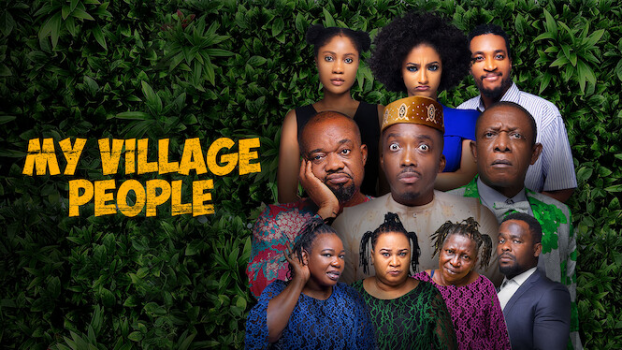 The movie starts on an exciting note, and is commendable for building a certain level of suspense and unpredictability, engaging the viewer’s mind with its complexity…

One of those Nigerian quirks I never seem to understand, even as a Nigerian, is the people’s need to always blame their “village people” for their misfortunes and downfalls, and then travelling to their villages on Christmas to celebrate with the very same people. Although mostly banter, there’s no doubt there’s an atom of truth in the constant conviction of spiritual attacks. The phrase, “village people,” is used by Nigerians in particular, to describe an undefined group of people from either their paternal or maternal home who they assume do not support their progress. The movie, My Village People is a theatrical portrayal of every possible thing that can go wrong in the interaction with “village people.” It passes as a comedic horror, and is quite enlightening.

Written by Bovi Ugboma (It’s Her Day), and directed by Niyi Akinmolayan (Hey You, The Man for the Job), My Village People was released on June 11th, 2021 in the cinemas, and only recently made a Netflix appearance in July 2022. A classic? Probably not. However, MVP is a good blend of the old and new Nollywood, and gives the viewers a good value for their time. It has an amazing storyline, backed by proper structuring, and stellar performances.

My Village People follows the story of Prince, played by Bovi, an ignorant womaniser who goes to any lengths to get a woman. He fails to heed his sister’s advice to not touch or take anything from their villagers, and faces a tussle of witches, wizards, and marine spirits. He loses his sleep, his job, and his sanity and is almost on the verge of losing his life when he receives help from the most unimaginable source.

Unknown to Prince, his parents had committed some kind of taboo, and after his father refused to take his place on the throne, the crown lingered on him. His interaction with his village people follows him to the city, as one visit changes his whole life.

Although the storyline is well-greased, it does not encompass the entire subject matter of the deviant methods of these spiritual manipulators. This shortcoming is highlighted by the constant use of humour to soften the blow of horror, an act that pulls down the movie’s intensity. Then again, since it is  written by Bovi, an ace comedian, the comedic input is undeniably the highlight of most scenes in the movie, which leaves the viewer with mixed emotions of panic and laughter. 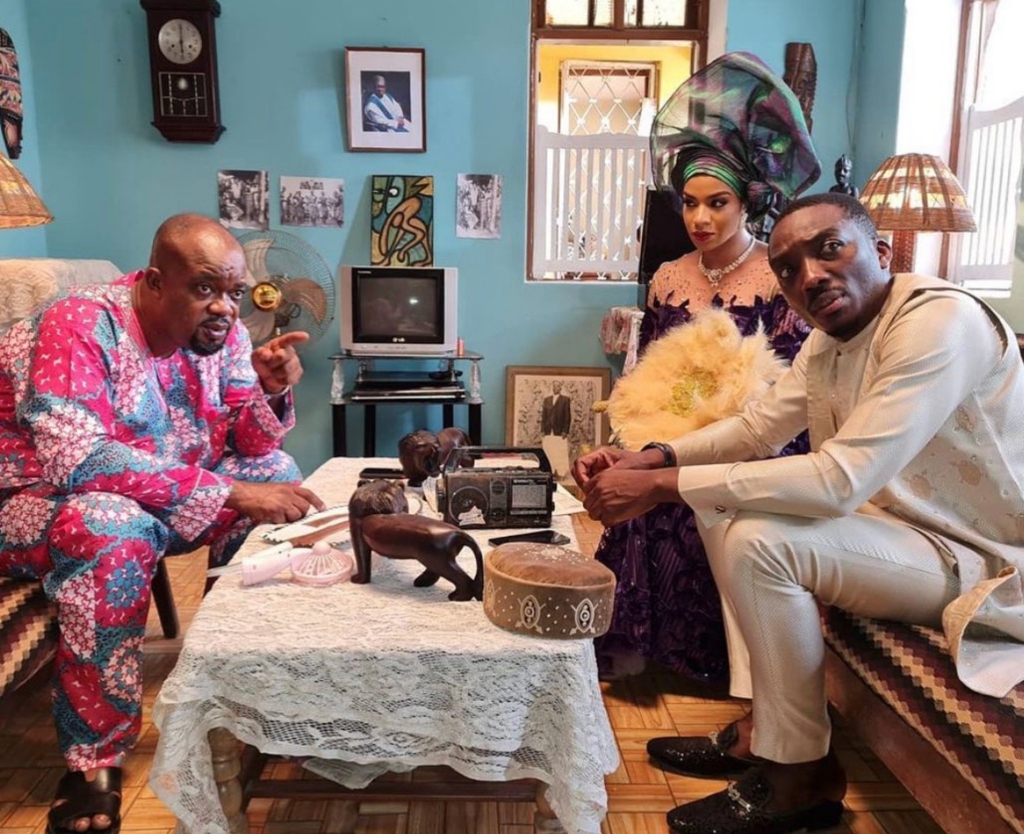 And, although its story isn’t new, the movie does enough to keep an audience, and the cast does even better to give viewers the entertainment they crave. The lead actors’ — Ameh (Sophia Alakija), Haggai (Theresa Edem), and Professor Pium (Nkem Owoh) —impeccable style of content delivery is the pillar of the movie. The movie features Venita Akpofure, Binta Ayo-Mogaji, Charles Inojie, Amaechi Muonagor, and Zubby Michael. It also features Racheal Oniga and Ada Ameh, whose deaths took a hit on Nollywood.

The movie starts on an exciting note, and is commendable for building a certain level of suspense and unpredictability, engaging the viewer’s mind with its complexity.

Most times, Nigerians exclaim, “my village people” to express their belief that a physical misfortune may be a result of some kind of spiritual attack. However, because it is used so commonly, it has become sarcastic to many. My first take on the movie is that it would be a good chance to explore what this phrase truly means, and if there is actually an attack launched on individuals by their village people. And although the movie takes a different route, I’m still of the opinion that the subject matter wasn’t properly explored.

Compared to the old horror movies in Nollywood like Karashika, Nneka the Pretty Serpent, etc., MVP stands no chance, as its portrayal of spiritual warfare comes in a solely humorous light.  The 1994 classic, Karashika, was a cause of constant nightmares and trembling in many Nigerian homes during its time, due to the detailed build up of tension and horrific intensity.

A major challenge the Nigerian movie industry has faced, is the issue of unreal effects and use of unrelated soundtracks. MVP performs strongly in these roles. My personal favourite is the rain effect which was timely and consistent. Also, the adoption of Falz’s “Karashika” as a soundtrack takes the viewer on a trip down memory lane.

The movie is far from perfect, and it flops in most of its acts. First, why is the backstory arriving so late, and why does the script make it appear so simple to oppose or hide from the supernatural? Also, the series of events in the end of the film suggests that Princess was aware of her spiritual position as the Queen of the Marine kingdom, yet the people in the kingdom are unaware. 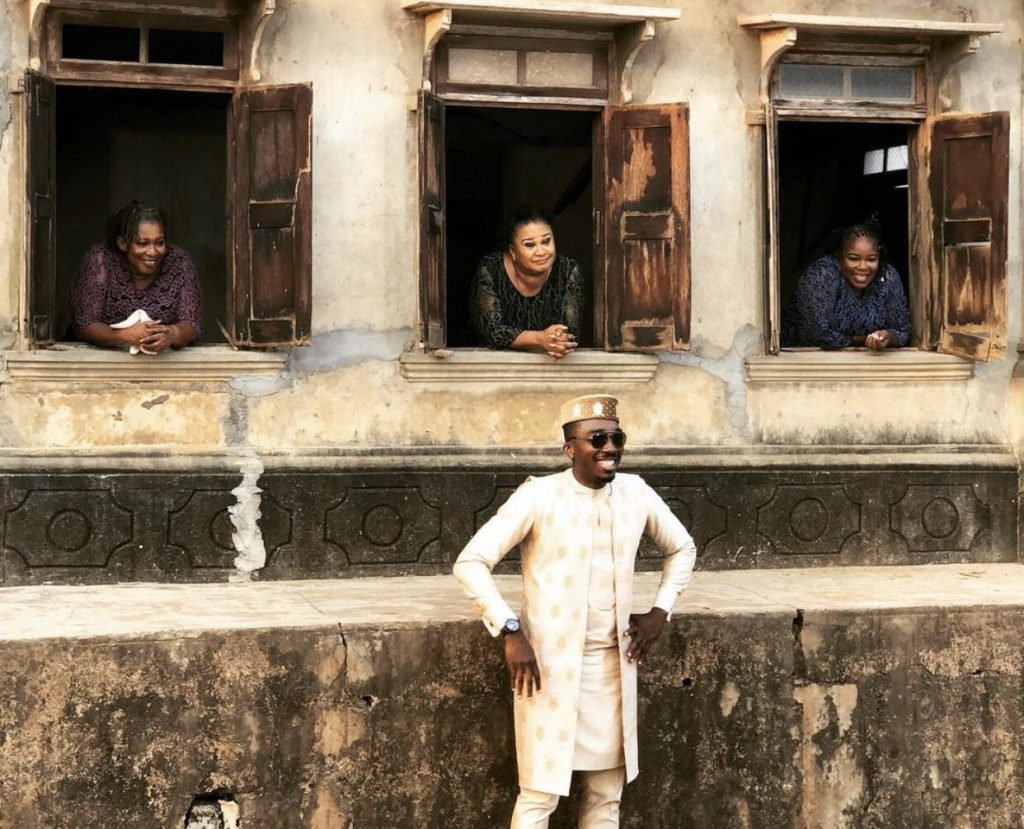 In the end, MVP is a decent watch and a nice shot at comedy-horror. An educative piece to all age grades, an eye-opener to the manipulative acts of “principalities and powers,” it reveals the need to tread cautiously in unusual environments.

(My Village People is currently available on Netflix here).

Blessing Chinwendu Nwankwo, a film critic, beautician, and accountant, currently writes from Uyo, Akwa Ibom State. Feel free to drop your opinion in the comment session below, and connect with her on Instagram at @bee_patrick_.