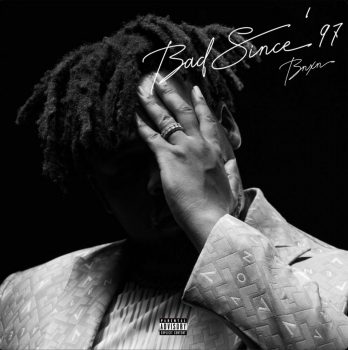 Bnxn Shines Brighter and Better on “Bad Since ‘97” EP

Bad Since ‘97 tells a well-sequenced story; it’s a story of a resurgence of artistry, with Bnxn restating the fact that the creation of his lofty melodies was never a fluke…

Twenty-five-year old Bnxn née Daniel Benson is the star of the moment. For more than two days, he has been trending on Twitter after a faceoff between him and fellow artiste, Ruger. Less than ten months after the release of his Sorry I’m Late extended play, the Babcock University graduate is back with his second project, Bad Since ‘97.

In April 2020, years after being an independent artiste, Bnxn got signed to Spaceship Records.  In the course of his journey in the label, Bnxn released two tracks. In between these two tracks were long breaks that later paid off, he said in  a recent interview. He left the label a year after, citing the label’s reluctance to use its resources on him as a factor.

In February 2020, Bnxn announced a change of name. A lot of people speculated that the reason for this decision was to avoid confusion with Jamaican music legend, Buju Banton. However, Bnxn has stated that the change of name was in order for him to own the rights to his creative works.

Born in the Gbagada area of Lagos, Bnxn has come a long way in the Nigerian music industry. Since he started officially four years ago, he has amassed hits upon hits. He has worked with established names such as Wizkid, Ladipoe, Timaya, Burna Boy etc. And although he has had some solo hits in the course of his journey, he shines brighter when he collaborates with other artistes.

Bnxn knows what works for him, and in this 21-minute-long spin, he explores this strength: his effortless ability to craft melodies.

The title track begins the EP. The song is heralded by perky strings, a blast of energy complimented by Bnxn’s enthusiastic stream of thought. The verse is lengthy and filled with words from an emboldened soul. When you say you are bad, there is a need to show it. Bnxn did just that.  He comes with a spark, turns it into fire, and blazes the nearest stereo. He reels out the reasons you have no choice but to pay attention to him. His confidence is intimidating. Most of the lines are metaphorical. He compares his hotness to that of suya. He also likens his new status to Burj Khalifa, the tallest building in the world.

“Bad Since 97,” as the EP’s opener is a calculated move, a warning to the cynics, a reassurance for the early days’ fans, and a peep into what the future holds for Bnxn’s brand. It’s a boisterous track that leads to the project’s other six tracks. One impressive thing about this track is the occasional tribute to moments in his life. When he says, “Since ‘17, I’ve been smoking hot like a kettle,” we are presented with an ambiguity: that he has been smoking since 17, or he has been developing his skill at that age. A line like “Eshi ma ri ran wo, my nigga” is a coy tribute to “Rirawo” by Weird Mc.

“Bad Man Wicked” continues the self-acclamatory run. It’s perky and rife with self-praise. Backed by a sunny horn section, Bnxn brings up some Burna Boy-like flows to play on this track, dropping some words for the doubters who thought he wouldn’t last in the industry. This song is created like a question-and-answer session, in such a way that Bnxn addresses himself. The response to the questions forms the better part of this song. He basks on his talent, focus, and perseverance. Just like in the previous track, the horn returns on this track while the paired sticks and drums collide to create a melodious track for Bnxn. At the end of the track, you notice that Bnxn says the same thing in different tempos and ways. “Bad Man Wicked,” and “Bad Since 97” are cut from the same cloth. However, the former is more subdued than the latter.

Although the music video of Wande Coal-supported  “Kenkele” appropriated the Chinese Kung Fu, the song’s title is a tribute to Moladun “Monsurat Omidina” Kenkelewu, a Yoruba comic actress who died in 2009. The song which was initially owned by Wande Coal sees both artistes having fun. It’s a funky tune. The lines are cheesy. Wande Coal and Bnxn were merely throwing in end rhymes, all to get the listeners to the dance floor. Bnxn’s verse is more of a memoir. He relates stories of his days before fame. He says, “Before the racks came coming ah mi way/ I used to buy my loud for 2k.” 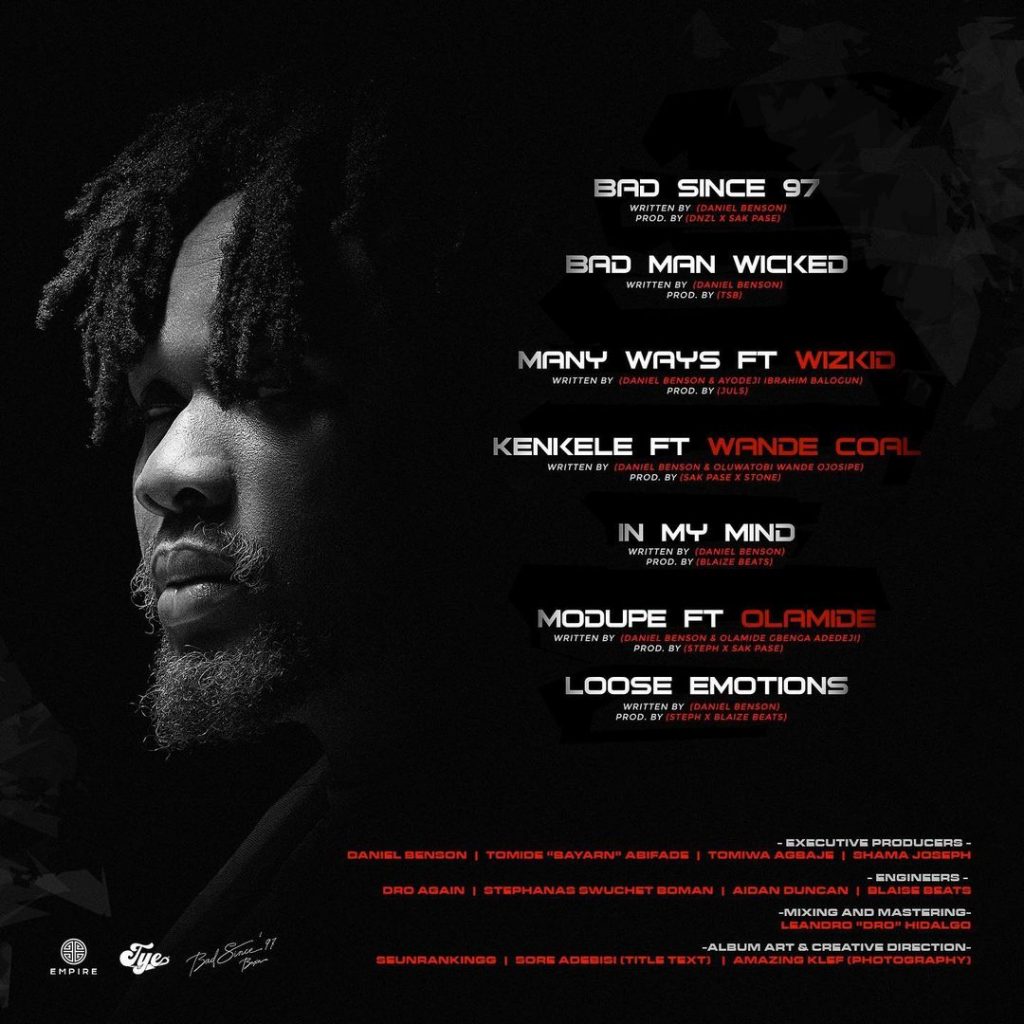 Two days before the release of Bad Since ‘97, Bnxn appeared on Color Studio to do a performance of a breezy and mid-tempo version of “In My Mind.” The track is an admittance of mistakes. It’s such a relatable track. Although Bnxn loves this girl she is with him because he  famous. “In My Mind” summarises the hassles celebrities go through in their relationships; the constant mistrust, emotional blackmail, and dishonesty. From the opening line, Bnxn knew he made a mistake by going into a relationship with the girl. The message of the track might have seeped in better if its production was lighter. This is a sad track, but its  production hinders the message.

For listeners to appreciate Olamide’s chaotic verse on “Modupe,” I suggest a trip to “100 to Million.” Although Olamide’s verse is disorganised, the message behind it should not be ignored. Olamide looks inward, picks lessons from his past, and mixes them with the present to craft a reflective tune. On “Modupe,” Bnxn explores Gospel music. The track stands shoulder to shoulder with any gospel songs around. It’s rife with gratitude, as well as a myriad of backstories.

The EP ends on a sad note with “Loose Emotions.” It is a  message to an ex-girlfriend. It is taunting and thrilling in the same breath. 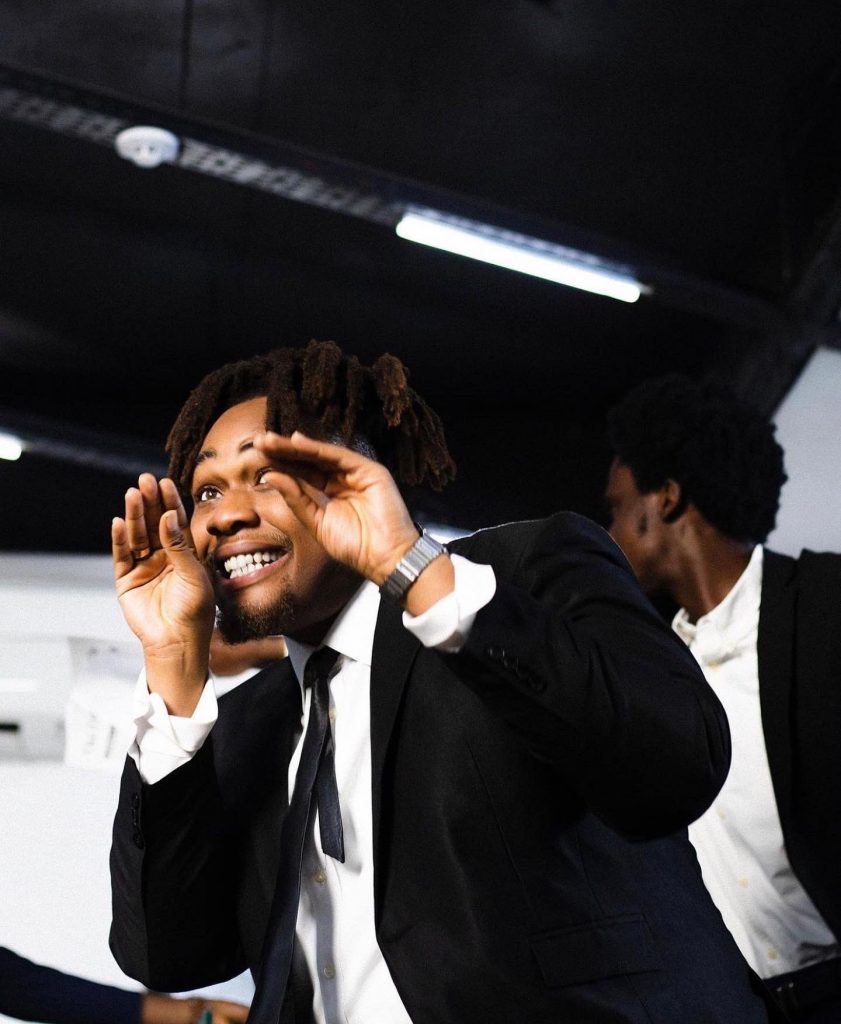 In some of Bnxn’s tweets preceding this EP, he said he worked so hard on this project in order to make Sorry I’m Late disgusting to him. To a large extent, he achieves that aim.  Bad Since ‘97 tops Sorry I’m Late. From the themes to the storytelling, the production down to the overall execution of the project; there was a high level of precision and obvious attention to detail. Bad Since ‘97 tells a well-sequenced story; it’s a story of a resurgence of artistry, with Bnxn restating the fact that the creation of his lofty melodies was never a fluke.